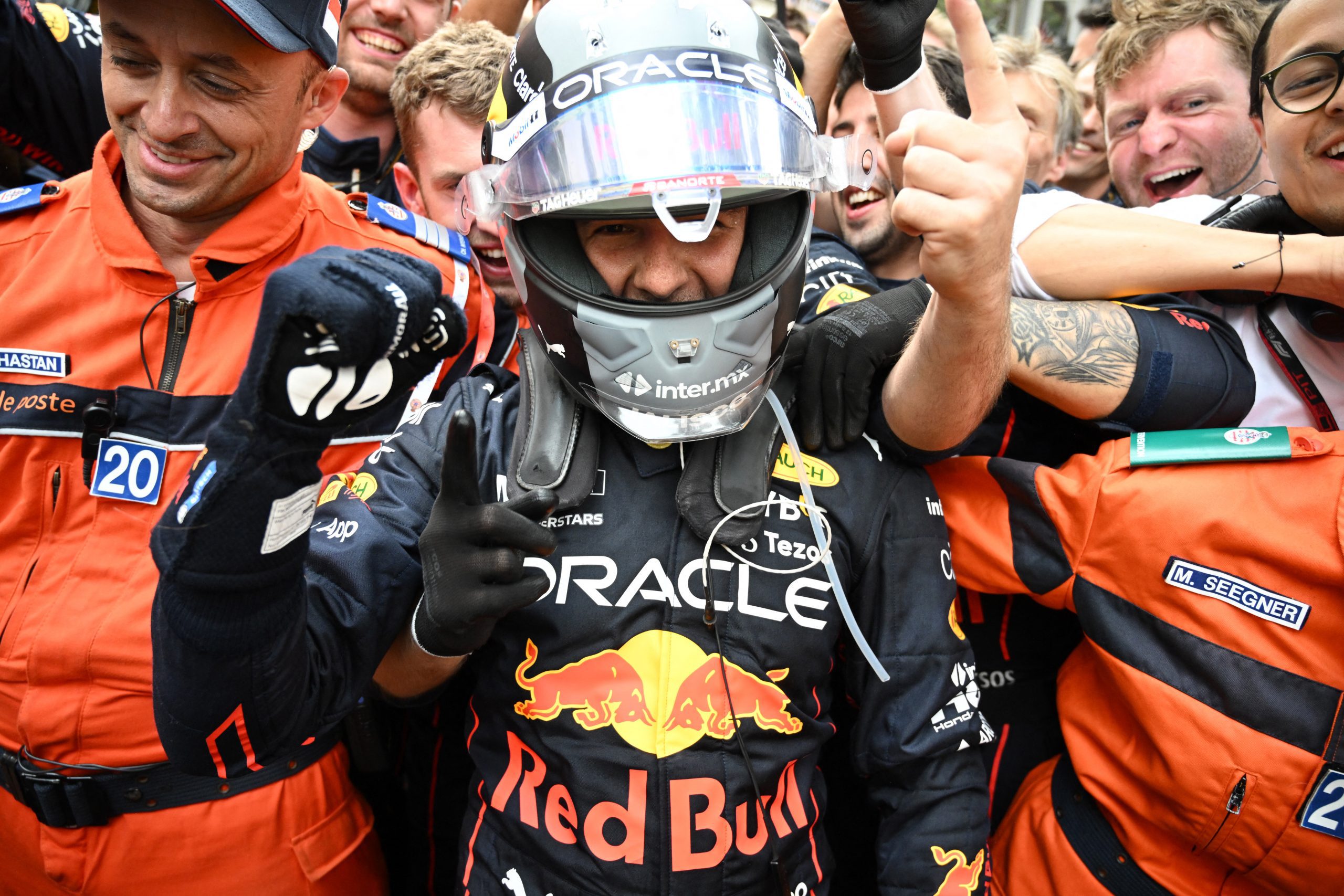 Red Bull Formula 1 driver Sergio Perez claimed the third victory of his career around the streets of Monaco after a shrewd strategy call from the Red Bull pit wall enabled him to leapfrog the Ferrari pair of Charles Leclerc and Carlos Sainz.

With Ferrari looking likely to take the win with Leclerc, and with his teammate Carlos Sainz running second, the advantage was with the Italian team. However, two questionable pit stops for Leclerc lost what was most assuredly a win for the Monegasque driver, with Leclerc ultimately dropping down to fourth.

While Ferrari threw away a commanding one-two, Red Bull were able to take advantage by bringing Perez in at the right moment. Faced with the prospect of a rapidly drying circuit, the first four cars had a big decision to make, come in for intermediates or stay out long enough to switch to the hard compound tires.

While the latter strategy worked for Sainz, who leapfrogged his teammate, Red Bull analyzed the situation more carefully and were able to bring Perez in at the right moment, thus handing the Mexican the lead of the race.

The brains behind the decision

The role of a strategist is a crucial one to play in Formula 1. Not only are the variables constantly changing but the pressure of making a split-second decision that could drastically alter the direction of a driver’s race needs to be made with a cool head in a sport where emotions run high.

Luckily for Red Bull they had Hannah Schmitz a former University of Cambridge graduate who has been with the team since 2009.

“Data goes into every decision we make,” Schmitz said in a blog for Red Bull sponsor Oracle earlier this year.

“Before we even get to the track, our simulations will have what we expect the tires to do, what we think the overtaking will be at that track, and all the paces we’re expecting of our competitors and us.

“And then when we’re at the track, we can use data to better estimate all those variables. Basically, we’re constantly using the data and refining those models.”

In Monaco her experience enabled her to make the right call, with Red Bull consultant Helmut Marko singing the engineer’s praises.

“Huge compliment to our Hannah [Schmitz], she was our chief strategist here,” Marko told Motorsport-Total after the Grand Prix.

“With the calmness and sovereignty with which she analyzed the whole thing, of course with the help from home in Milton Keynes, staying outside even though others were already inside, then doing the fastest laps with the intermediates and the like – that ultimately has made the difference.”

While Schmitz had a macro view of the race that was unfolding, race winner Perez doubted if the team had made the right call at the time. The Mexican believed that the strategy employed by Sainz was the way to go.

“When I was on the Inters I was like, ‘I think we screwed it up.'” Perez explained.

“The track was already pretty dry and it just seemed like a matter of laps before we had to switch to slicks.

“With the warm up on the slick tires we were able to tell the difference with Carlos when he pitted on that tire. We were able to do a very fast inlap, we were pushing really hard and yes the tire was there and the track was dry for the slicks.

“However, it was quite difficult in the first laps because especially on the hard tire the warm-up was a bit tricky and in Monaco you can’t expend a lot of energy. So it was a day where you just had to bring it home.”

While Perez questioned the strategy, Red Bull team principal Christian Horner took a different view of the matter stating that the decision to switch intermediates was the best call given the condition of the circuit.

“We all made the right decisions today. The command post, the strategists and above all the guys in the pit lane did a great job, and of course Checo too.

“His pace on the intermediates was outstanding and on the slicks he only had to manage the race until the end.

“There is a process. You have to have effective and clear communication. And I think we did a great job on the pit wall today, we had all the information and we used it well to get the transition right.”

The race was Ferrari’s to lose

Ultimately it was Ferrari who threw away the chance of a victory by first hesitating and ultimately doubting their strategy calls. A fact that Marko is quick to highlight.

“I can’t judge what happened to them internally, but we gladly accepted what was offered to us,” Marko commented.

Meanwhile, Horner took a more diplomatic approach to the situation preferring to highlight the work of his own team.

“I thought we could get one of them, but not both,” Horner said.

“And of course we benefited from their mistake, but at a certain point it looked like like we could overtake Sainz with both cars, including Max. So it was pretty close.

“The circumstances were the same for everyone and it was very close between the two teams. Charles seemed to have things pretty much under control in the early laps, he also had a buffer on his team-mate behind him.

“At that point it looked like Ferrari had the race in the bag but I think we just reacted very well to the conditions and got the transitions right, the double pit stop and so on and so on, that did very well works for us.”

The result means Red Bull now extend their lead over Ferrari in the Constructors’ Championship, on a weekend where both Ferrari and Leclerc should have regained their spot at the top of the standings.