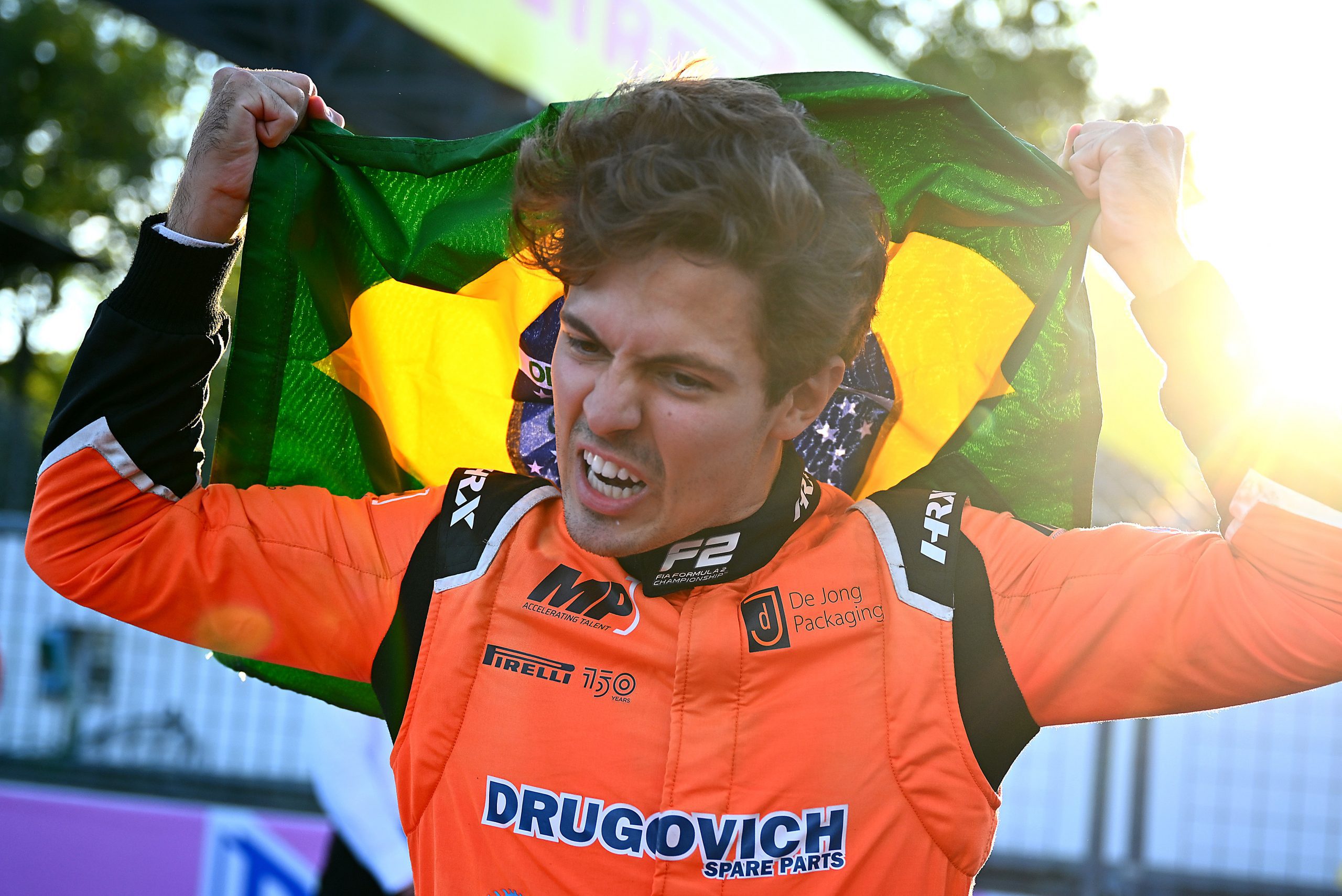 Dominating your way to the Formula 2 title surely warrants a seat in Formula 1. You would think so, but for some reason, Felipe Drugovich‘s 2022 F2 campaign isn’t enough to guarantee him a place on next year’s F1 grid.

Two feature races and a sprint remained when Drugovich was confirmed as the champion on the Saturday of the Italian Grand Prix weekend.

A relatively disappointing year for the highly rated Theo Pourchaire and nobody else able to step up to the plate saw Drugovich run away with the championship.

His reward? A reserve and development driver at Aston Martin. That’s not enough at all.

Why is Drugovich not being talked about?

On paper, prior to 2022, Drugovich‘s junior single-seater results are not that impressive.

He finished 16th in the 2019 Formula 3 championship, ninth in his first season of F2, eighth the following year and has now just won the title but in his third season.

In terms of pure performance, Drugovich was very good with his pole position at Silverstone being one of the highlights.

Considering he was expected to be largely anonymous, Drugovich certainly made a mark with a few impressive performances and tied Jordan King as the highest ever placed MP Motorsport driver ever in the standings, until this year of course.

Explaining his 2021 dip could simply be put down to him not fitting in at Virtuosi. Zhou Guanyu blew him out of the water, however there is an argument that the team favoured the Chinese driver more.

Drugovich moved back to MP Motorsport for this year and he has been the class of the field.

He has combined pace with consistency, the perfect combination for any racing driver, against a field that was, at least before the season, highly rated.

It’s easy to say now that the 2022 F2 grid is not that talented, but prior to the opening race, the likes of Pourchaire, Liam Lawson, Logan Sargeant and Dennis Hauger were all seen is excellent juniors.

Going into the final races in Abu Dhabi, Drugovich is 77 points clear of Pourchaire who has made lots of mistakes this year.

Forget what the Brazilian did or didn’t do before 2022, this season alone, in the championship which is dubbed by the FIA as the best series to prepare you for F1, is enough to earn a seat on next year’s grid.

F2 this season has been pretty dull at times because Drugovich has been that good, leading races from start to finish.

Will Drugovich be in F1?

At the moment, Drugovich is set to make it three drivers unless Red Bull come calling.

It appears that Colton Herta won’t be racing in F1 as he needs an exemption from the FIA due to the IndyCar star not having enough super licence points.

With Pierre Gasly still expected to join Alpine and Yuki Tsunoda‘s future being uncertain, there should be at least one spot up for grabs at AlphaTauri.

Helmut Marko has not been impressed by any of his Red Bull junior drivers in F2, so why not buy out the person who dominated them all?

“We had a few contacts in IndyCar but as I said many times, it’s not the main goal for now, we’re just trying to be in F1,” Drugovich told the press.

“If I need to race something else other than F1 next year, it’s for sure a category to consider.”

Drugovich not being in F1 is wrong

If Drugovich isn’t in F1 next year, there is clearly something fundamentally wrong with the system.

How can it be that drivers such as Antonio Giovinazzi and Nico Hulkenberg have been strongly linked to Haas yet there has been no mention of Drugovich?

How many drivers have had F2/GP2 campaigns like Drugovich? Very few and to do it with MP Motorsport, a team that is traditionally not a front-runner makes it all the more impressive.

With the debate about whether Herta should be given a super licence or whether IndyCar is given enough credit with the FIA‘s super licence points system, for a dominant F2 champion to have barely even been linked to F1 is outragous.

The worst thing is, it doesn’t feel like an Oscar Piastri situation where the Australian was always going to be in F1 at some point. With Drugovich, it feels like if it’s not now, it will never happen.

Nobody is saying Drugovich will be a world champion or a race winner, but at least give him a chance. Perhaps AlphaTauri just will, but it shouldn’t be this difficult.