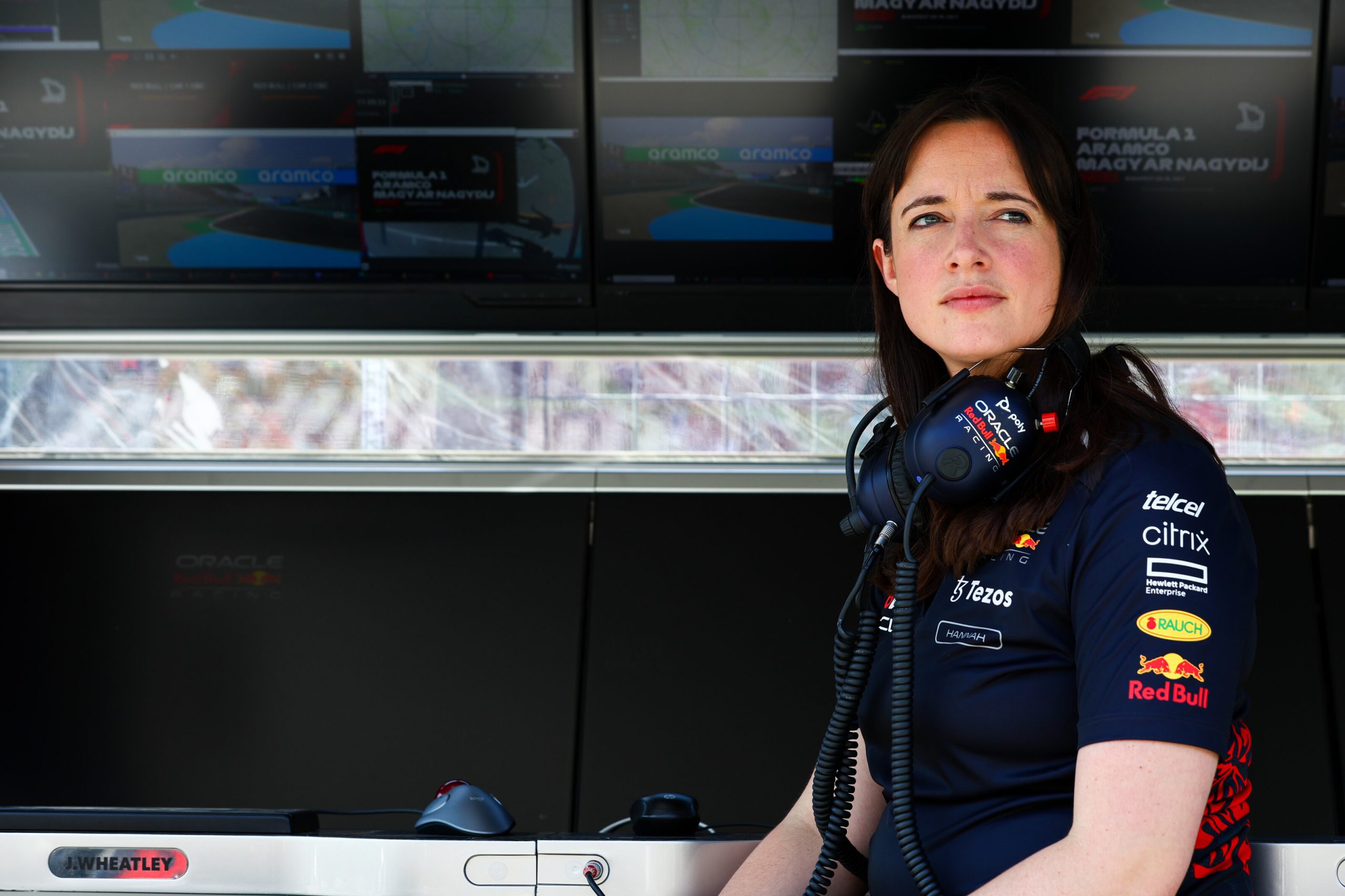 This was far from Schmitz‘s first race-winning involvement for Red Bull though, or even this season.

“Today, I think Hannah, our strategist, was insanely calm. Yeah, she’s very good,” Verstappen exalted after the Hungaroring win. “You can’t afford many mistakes. It’s of course very hard to always be on the good side, let’s say it like that.

“But I think we have a lot of good guys and girls in the team.”

The University of Cambridge graduate masterminded Sergio Perez‘s Monaco Grand Prix win and has consistently made the right calls to help Red Bull build a commanding lead over the strategically inept Ferrari.

But who is Hannah Schmitz? Find out more about Red Bull‘s Principal Strategy Engineer here.

Born Hannah McMillan and educated in London, Schmitz left Croydon High School in 2004 and started at Cambridge University the next year.

Having had a keen interest in cars and engineering ever since she was a toddler, she led Cambridge’s solar racing team to its first attempt at the World Solar Challenge in Australia.

She was also a keen water polo player, apparently.

After graduating in 2009 with a Master’s Degree in Mechanical Engineering, Schmitz walked straight into an internship at Red Bull Racing that same year, five years after her now rival counterpart Inaki Rueda entered the F1 world.

“I think there’s a lot of people that initially maybe don’t have the confidence in you to do the job,” she said of her early career on the Red Bull website.

“As a strategist you have to tell a lot of people what to do and they’ve got to listen to you, so it’s building up that trust and I think as a woman unfortunately that was harder, but now I have that respect and I hope other young women who want to get into the sport will see that you can do it, can embrace it, and we’ll see more diversity.”

After starting at the team as a Modelling and Simulation Engineer, Schmitz quickly ascended to the role of Senior Strategy Engineer in 2011, a role she’d hold for a decade.

But to most F1 fans, she rose to prominence with her winning call at the 2019 Brazilian Grand Prix. After a late safety car, she pitted Verstappen from the lead but he flew back past Lewis Hamilton for the win, and Schmitz was invited onto the podium to collect the trophy.

“It was an incredibly special moment and the pinnacle of my career,” she later said. “I’d actually just come back to work after having my first child so that was quite a big thing for me, to prove I was still here and could do the job well. It was just an incredible experience.”

That win, alongside consistently accurate calls, earned her another promotion 18 months later, to her current role of Principal Strategy Engineer, and she’s already helped scheme the downfall of two F1 giants.

Red Bull consistently outfoxed Mercedes – no strategic slouches themselves – during the 2021 F1 season, culminating in the controversial but tactically flawless Abu Dhabi showdown, in which Verstappen‘s switch to softs behind the safety car helped gift him the win.

Before that, an aggressive strategy at the US Grand Prix fought off the Black Arrows, and she also juggled both cars at the French Grand Prix to give the Dutchman another victory.

As most Tifosi will tell you, Ferrari‘s been a shambles on the pitwall this season – but that only helps Red Bull if they’re able to take advantage of it, and Schmitz has ensured they’ve punished the Scuderia at every turn.

Before July’s Hungarian Grand Prix, the streets of Monte Carlo were the stage for Schmitz‘s crowning glory.

With Charles Leclerc leading the race comfortably, she called in Perez for intermediate tyres on lap 17, and Verstappen a lap later.

The sluggish Ferrari only brought Leclerc in a lap later and when Schmitz double-stacked the Red Bulls on Lap 22. Perez took a lead that he’d never relinquish, whilst Verstappen also jumped his expletive-laden title rival.

Hungary was arguably an even more impressive feat, as she helped Verstappen recover from 10th on the grid to win.

A late startline switch to soft rubber enabled Verstappen to rise up to fifth, and as Leclerc floundered on the hard tyre, Verstappen twice overtook the Monegasque on his second set of mediums to take the win and put the championship further out of reach.

“We’re all very much a team, so all throughout the weekend it’s very collaborative, with listening to everybody’s different opinions and points of view,” Schmitz told Sky Sports F1.

“Because it’s not always just about the numbers and the data, the drivers have a lot of feeling as well in the car, so we try to take that on board, take on board what the race engineers are looking at kind of different data than the strategists.

“So taking all that information on board and we discuss everything. But at the end of the day, it’s a strategy call, and we’ll make the final call.

“We’ll kind of just work as a team and use as much information as we can to make those decisions.”

The secret to her success?

After Verstappen‘s praise, she also stressed the importance of staying calm on the pitwall.

“I think staying calm is one of the most important attributes of a strategist,” said Schmitz.

“A tip someone told me once is if you turn your hands over, so your palms face down, it helps you be clearer and more commanding in what you’re saying.”

Perhaps that’s where Ferrari have been going wrong. But as Schmitz‘s whole career shows, there’s more to winning a race against the odds than just the steering wheel in the palms of the driver’s hand – whichever way they’re facing.