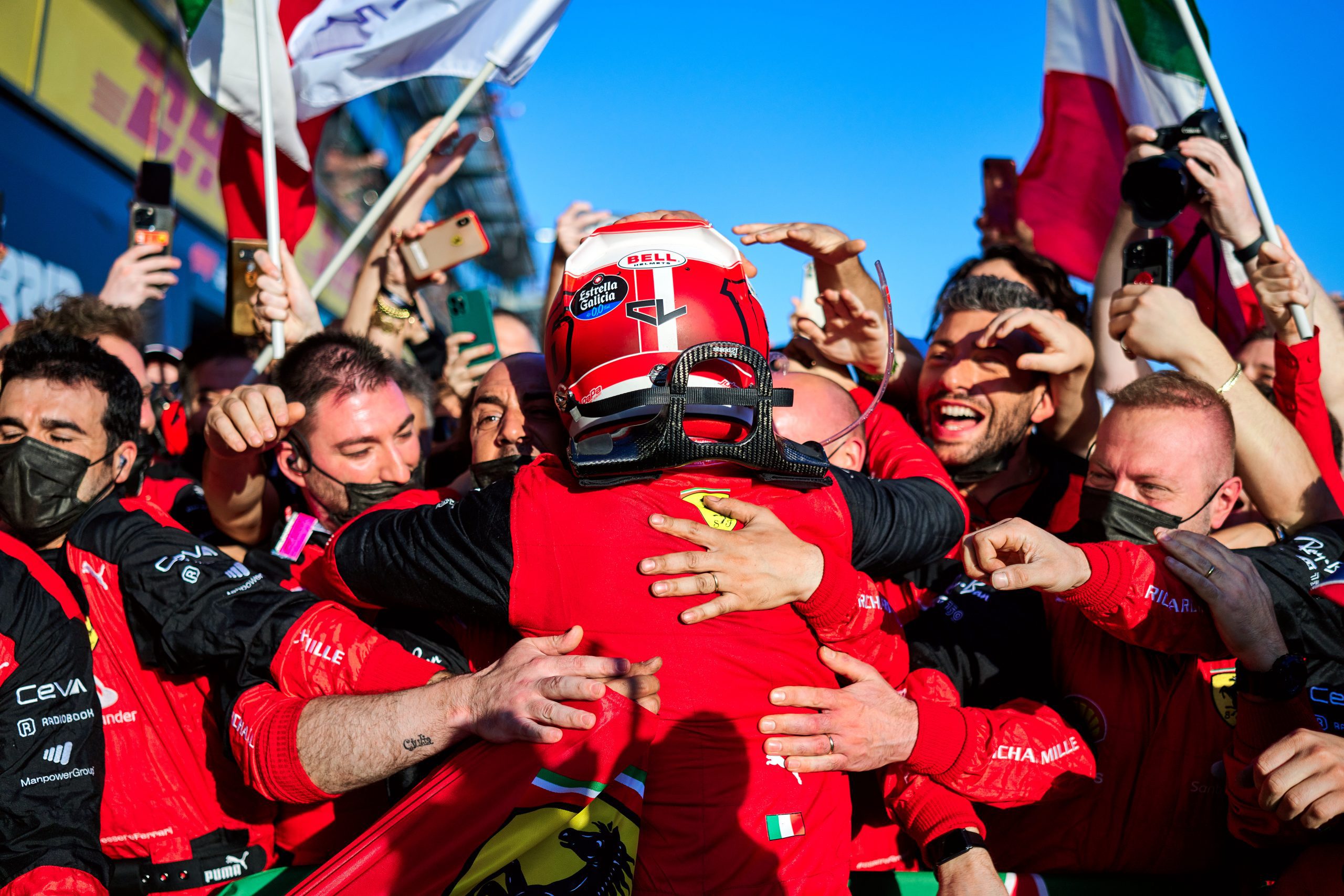 All eyes will be on Charles Leclerc as he enters the first European event of the Formula 1 season as championship leader and is without doubt the driver to beat at the Emilia Romagna Grand Prix.

Leclerc has opened up a relatively big lead of 34 points after three rounds, after some outstanding performances in Bahrain, Saudi Arabia and Australia.

His main rival Max Verstappen has fallen by the wayside due to reliability issues for Red Bull which have put the Dutchman 46 points behind Leclerc.

Verstappen won last year’s race at Imola and will be desperate for a repeat victory this weekend to turn his championship around.

However, there is the small matter of a sprint race and rain in the area for the teams to consider in Italy.

Imola sees the first of three sprint events this year, with eight points on offer for the winner of Saturday’s 100km sprint race. This means a possible 34 points can be won, so a troublesome weekend for Leclerc could see his championship lead eroded.

Just like 2021, there will be just 60 minutes of practice before heading straight into qualifying on Friday evening so the importance of preparing well and getting up to speed quickly is magnified.

This is where Ferrari can lead the way once again because it seems they have got got excellent correlation between their newly build simulator and the actual on-track performance from the car.

Conversely, Red Bull and Mercedes have had a trickier time to find the sweet spot of their respective cars so far.

Leclerc says his mindset for 2022 is different to previous years because he knows Ferrari have a car that’s capable of winning and all he has to do, which is easier said than done, is execute as best as he can.

“Thirty-four points is always good to take wherever you are in the calendar but I don’t want to focus too much on the championship for now,” Leclerc told the press.

“Italy will be incredible, but we need to approach the race weekend, just like we approached the first three weekends. I think it’s extremely important not to put on ourselves extra pressure and not try to overdo things.

“We are working as a team extremely well since the beginning of the season and we just need to keep doing our job, just like we did in the first three weekends.”

Rain to level the playing field?

F1 fans should know it’s morally wrong to talk about the chance of rain in the build-up to a Grand Prix, but the current forecast for Imola suggests the weather will be a big factor this weekend.

First practice and qualifying on Friday will almost certainly be wet so any teams that were considering to bring upgrades to Imola may want to think again because they will not get any meaningful data.

Alpine are the team that are set to bring the biggest upgrade package to the Emilia Romagna GP, with most teams waiting until the next race in Miami.

The only wet running to take place this year was on the final day of the first pre-season test in Barcelona when the track was artificially wet. However, the cars were still relatively new then and the circuit dried out very quickly so it’s anyone’s guess as to who will be fastest in the rain.

You would typically look to Verstappen or Lewis Hamilton, both of whom have produced some sensational wet-weather drives in F1.

Rain will give the teams a big dilemma regarding the wing levels they should run. With a likely dry sprint race on Saturday, you don’t want to be a sitting duck on the straights and we saw in 2021 how Hamilton‘s low-downforce setup so him ease past several cars to come back and finish second, having made a big mistake mid-race.

Equally, you need enough downforce to qualify and start the sprint race from a high grid position as Imola isn’t the easiest track to overtake at.

Will the Mercedes charge start in Imola?

Remarkably, George Russell sits in second in the drivers’ championship following his podium last time out in Melbourne.

Mercedes are also second in the constructors’ championship, a position they would have taken if you offered it to them at the end of pre-season testing.

Porpoising is still the big problem for Mercedes as they can’t run the car low to the ground as they intend to, perhaps this is also down to the car philosophy and lack of sidepods.

Once they sort this out, Mercedes are confident they will be a big threat and the medium speed corners of Imola should suit the characteristics of the W13.

“We’ve got to go about the process analytically, we can’t do anything crazy,” Russell told Sky Sports. “We want results and performance, but if we do anything too drastic, we’re going to go backwards not forwards.

“We’ve got to trust our team and the process and it’s going to take time, but we know there is so much potential in the car. We’re a bit overweight, lacking a bit of downforce and we know why – because of porpoising. But if we can get on top of those two things there is a lot of lap time there.”

Rain on Friday, and potentially Sunday, will provide more opportunities for mistakes from Ferrari and Red Bull, so this weekend should see the most competitive Mercedes yet in 2022.

Can Haas bounce back?

Haas had a disappointing Australian GP, with illness for Kevin Magnussen and mistakes from Mick Schumacher pushing them down the pecking order compared to Sakhir and Jeddah.

Given the performance that’s in the Haas, they need to start maximising the potential in the car so Imola will be a key weekend to point themselves in the right direction.

Magnussen believes Haas have an all-round car and feels the teams that can tackle the kerbs at Imola the best will be very competitive.

“Imola is an awesome track but the characteristics and speed-wise, corner speeds and straights, make it a more average track,” said Magnussen. “As it has a bit of everything, and this car is all-round good, I think we should be able to do well there

“The cars are lower and they’re also stiffer, so kerb riding is a little harder than it used to be with the old cars. We’ll see, I hope whatever challenges these new cars have we can still be in the competitive range in terms of kerb riding.”