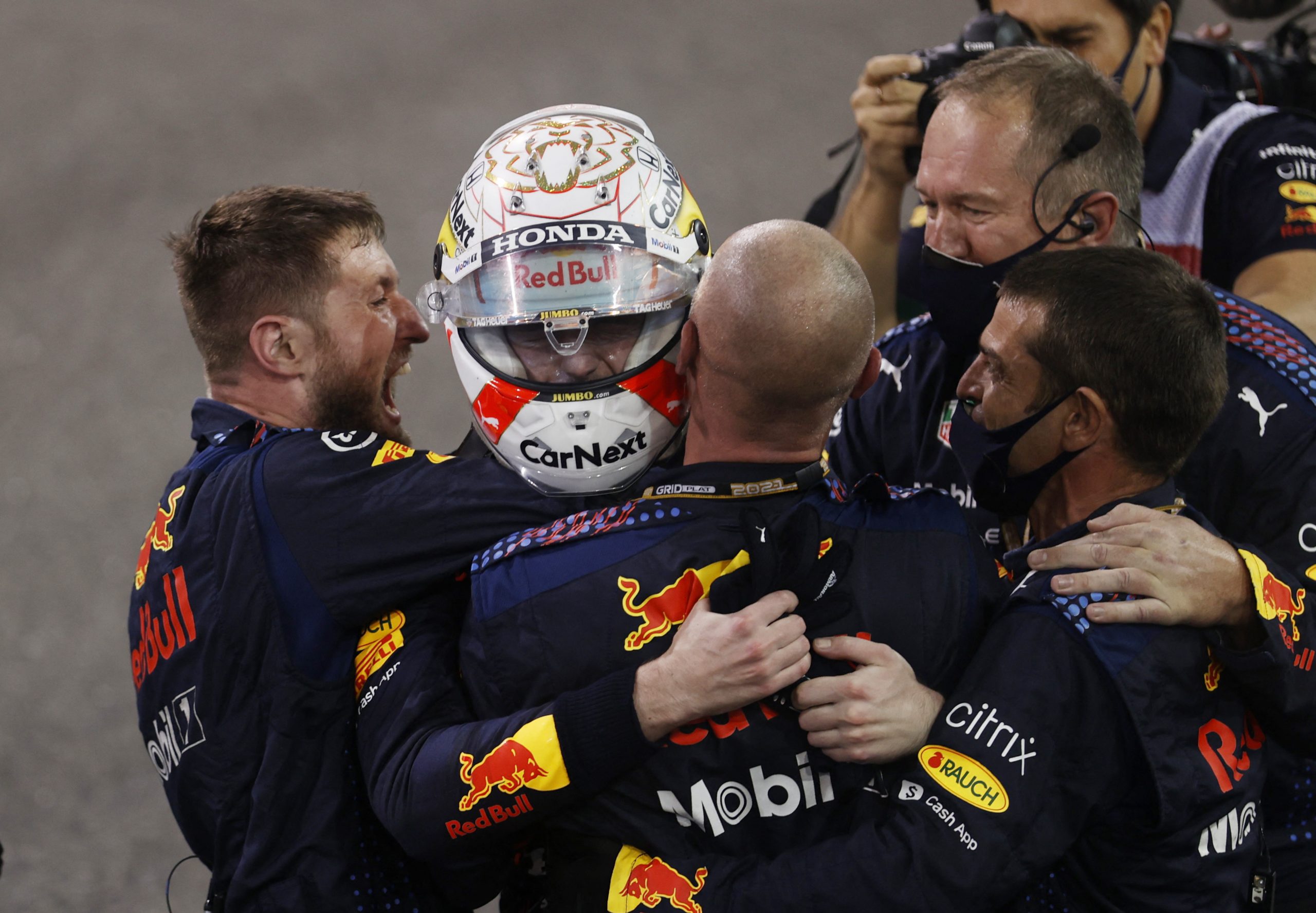 All had looked lost for Verstappen as he struggled to chase down the Mercedes, which had taken the race lead off the line in the first lap and maintained it ever since despite an early lunge from Verstappen to retake first, but a late safety car to clear the crashed Williams of Nicholas Latifi gave the Dutchman one last shot at the race win and the title.

Race control made the decision to allow the lapped cars between Hamilton and Verstappen to unlap themselves, putting the Red Bull right behind the Mercedes for the restart, and the young challenger managed to dethrone the established champion with a strong move up he inside, bring the lead home for a race and championship win that will go down as one of the most dramatic the sport has ever seen.

Verstappen, starting the race on the less-favoured soft tyres after a lock-up during Q2 yesterday, got a markedly slower launch of the line, the Red Bull car bogging down and allowing Hamilton with a faster reaction time to take the lead into Turn 1.

The Dutchman stuck on the tail of the Mercedes throughout the opening lap until he spotted a gap on the inside heading into Turn 6 and went for it.

The rear wheel of Verstappen collided with the front of Hamilton, with the champion forced to go off the track and rejoin ahead of the Red Bull.

Hamilton ended up ahead despite the protests from the Red Bull pit wall to Michael Masi and the stewards that the Mercedes had gained a lasting advantage, with race control determining the British driver had cut the gap to Verstappen behind and no penalty awarded either way,

The world champion then proceeded to show far superior pace, pulling out a gap to the Red Bull in second of more than four seconds by Lap 12, and when Verstappen came in to change his soft tyres for a set of hards in Lap 14, Mercedes mirrored the move the next lap.

Sergio Perez had put his car into play after starting from fourth when an early overtake on the McLaren of Lando Norris put him into the top three, and the Mexican tried everything to keep Hamilton behind as he went long after the top two pitted in a bid to slow the Mercedes.

He managed to keep Hamilton at bay for several laps with a sterling display of defensive driving, even taking back the place with some deft manoeuvring.

However, while Perez had helped his teammate close the gap to the leader from 6 seconds to around 1.5 seconds as he duelled with Hamilton, the Mercedes ultimately managed to pass once more on Lap 26 and pulled out a lead of over four seconds.

A retirement for Antonio Giovinazzi with engine issues on Lap 36 brought out the Virtual Safety Car, with Red Bull opting to pit Verstappen for fresh tyres while Hamilton stayed out, with the gap after the hazard was cleared dropping to around 17 seconds.

Hamilton came on the radio to state his concerns that the team had taken too large a risk in declining the pit stop under the VSC, but Mercedes explained the move by saying that it was a bigger gamble to come in and risk losing track position to his title rival.

But the move wasn’t enough to allow the Red Bull to challenge Hamilton for the lead of the race, and heading into the final 4 laps of the race everything looked lost for the challenger.

But the late safety car to clear Latifi’s crashed Williams offered Red Bull a sliver of hope, and when the decision was made to allow the lapped cars to pass the safety car and unlap themselves, leading the two title rivals in a clean shootout, Verstappen got the better of the Mercedes and took a shock victory.

Perez was the better of the title rival teams’ second drivers, and looked on for third before he was made to retire under the late safety car, with a challenging final race at Mercedes for Valtteri Bottas as the Finn finished in fifth.

Ferrari win out in the midfield

Carlos Sainz closed out an impressive maiden season with Ferrari by finishing third following the late retirement of Perez and ensuring the Italian team finished ahead of McLaren in the fight for third in the constructors’ championship.

Yuki Tsunoda capped his rookie season in F1 with fourth ahead of teammate Pierre Gasly in fifth, securing fifth for AlphaTauri in the Constructors Championship, with the pair finishing ahead of McLaren’s Lando Norris seventh ahead of the Alpine pair of Fernando Alonso and Esteban Ocon, and the second Ferrari of Charles Leclerc.

The final points position went to the he second Ferrari of Charles Leclerc, beating out his former teammate and the Aston Martin of Sebastian Vettel, while Daniel Ricciardo just missed out in 12th ahead of Vettel’s teammate Lance Stroll in 13th.

The lone Haas of Mick Schumacher, left as the team’s only car to start the race following a late positive COVID-19 test for Nikita Mazepin, came in 14th and last.

Kimi Raikkonen’s final race in Formula 1 failed to yield a fairytale finish, as the Iceman slid his Alfa Romeo off the track on Lap 26 and made contact with the barriers, damaging his rear wing in the process and forcing a retirement.

Alfa Romeo finished the day with a pair of retirements, with Giovinazzi also retiring from what could be the Italian’s final race in F1 with engine issues on Lap 36, as did Williams with George Russell stepping out in his final race for before joining Hamilton at Mercedes for the 2022 season, and the late crash taking out his teammate Latifi.