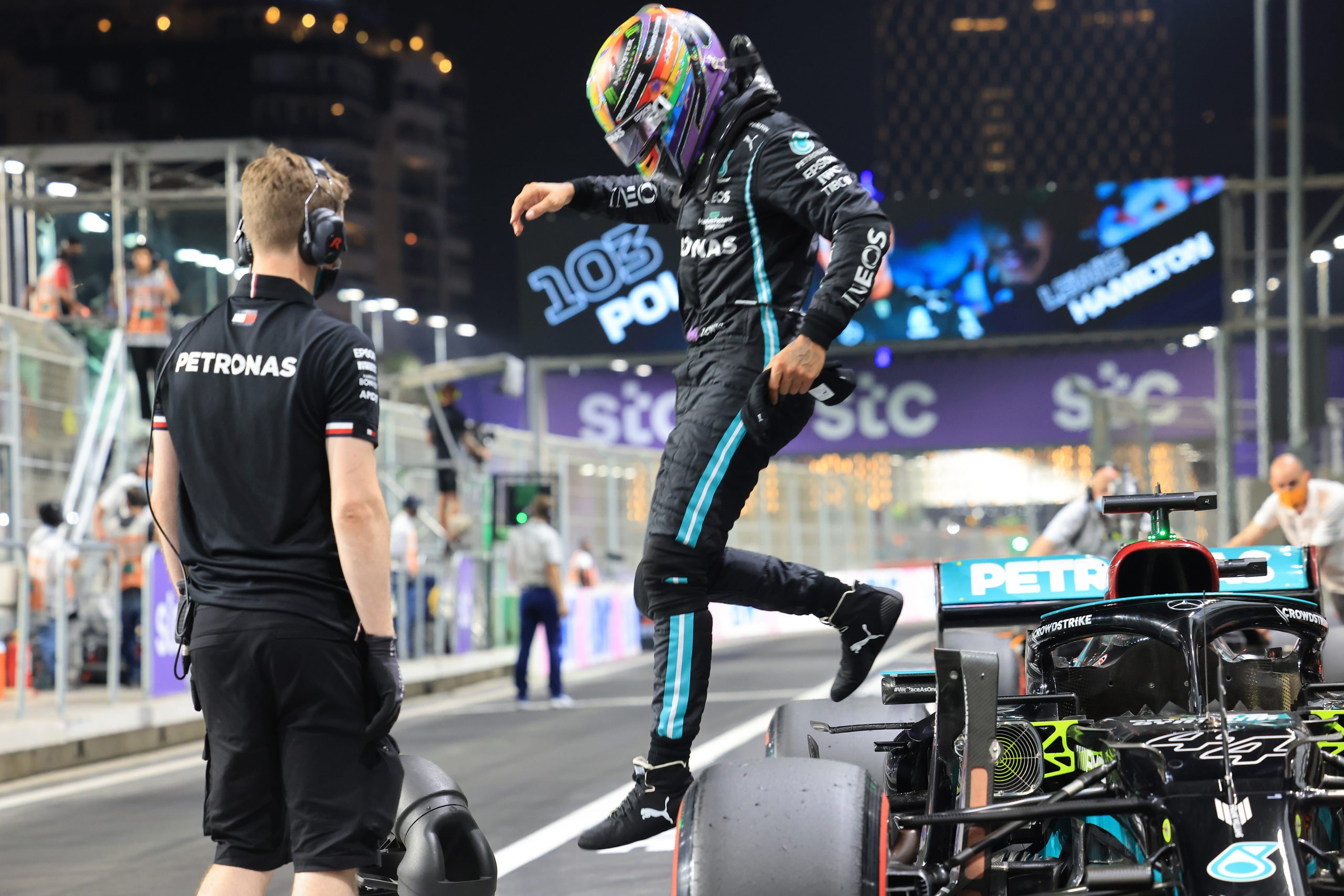 Lewis Hamilton stole pole for Sunday’s Saudi Arabian Grand Prix from under Max Verstappen‘s nose after the Dutchman hit the wall on the final corner of his final qualifying run.

The Red Bull look to have the measure of the Silver Arrows, having generally set the pace throughout. Prior to the start of Qualifying, it had been a day to forget for Mercedes driver Hamilton, who was summoned to the stewards for two separate incidents in Practice 3.

And yet, as qualifying got underway, he survived significant punishment, getting away with a reprimand for the incident with the Haas driver. This set up a crucial session, with the Jeddah circuit expected to be exceptionally difficult to pass on. Right from the off, we were treated to drama.

Just when you thought the season couldn’t get anymore dramatic, Verstappen slams into the wall in the final corner of his final Q3 qualifying lap – throwing away pole in the process.

For almost all of Q3, the 24-year-old looked to have pole sown up. Hamilton had to back out of his first run, clearly suffering from some pretty serious understeer, while Bottas could only go within four-tenths’s of the Red Bull man’s first run time.

However, it was in the second Q3 runs that the pendulum would swing massively back in Mercedes‘ favour. With Verstappen currently commanding an eight-point lead in the F1 Drivers’ Championship, pole would have put the Dutchman in a commanding position heading into Sunday’s race.

And yet, with a minute to go in the session, Hamilton improved on his first time, posting a 1.27.511 to move into provisional pole. This left Verstappen needing to pull another rabbit out of the hat – which he very nearly managed.

Following a scrape with the wall in Sector 1, the Dutchman was looked sensationally quick through the middle sector, holding a two-tenth advantage over Hamilton with only the straightforward final section to go.

But then it happened. Heading into the final corner, Verstappen locked up massively, running very wide coming out of the final corner. He slammed into the outside wall, snapping his rear wishbone in the process.

In what could prove to be a title-defining error, he handed Mercedes a front-row lock-out, with Valtteri Bottas now poised to start right alongside Hamilton for Sunday’s race – while Verstappen has to settle for third place.

It remains to be seen whether Verstappen‘s RB16B has sustained any damage that will require Red Bull to take a penalty on Sunday – but after the season we’ve had, you wouldn’t rule anything out just yet.

Ahead of the Saudi Arabian GP, much of the talk revolved around its uncompromising nature, and the immense speeds that drivers would reach. This was on show during Q2, when Ferrari’s Carlos Sainz was very fortunate to avoid slamming into the barriers in Sector 1.

The Spaniard was seemly unable to keep the rear of his car in check, describing his machine as undrivable after his second run. Naturally, he finished last in Q2, meaning that Sainz will line up in P15 for tomorrow’s main event. Significantly, McLaren were largely unable to capitalise on Ferrari‘s woes, as Ricciardo could only qualify in 11th place.

While the likes of Alfa Romeo and Williams managed to get one or both cars out of Q1, it came at the expense of both Aston Martin cars. Sebastian Vettel ands Lance Stroll will line up P17 and P18 respectively for tomorrow’s race, finding themselves half a second away from safety in the first qualifying session.

Alpine’s Fernando Alonso, fresh from a third placed finish in Qatar, was also fortunate not to be eliminated at the first time of asking, with the French manufacture struggling for pace all weekend. George Russell of Williams did manage to sneak into Q2, with the Brit set to line up in P14 for tomorrow’s race.