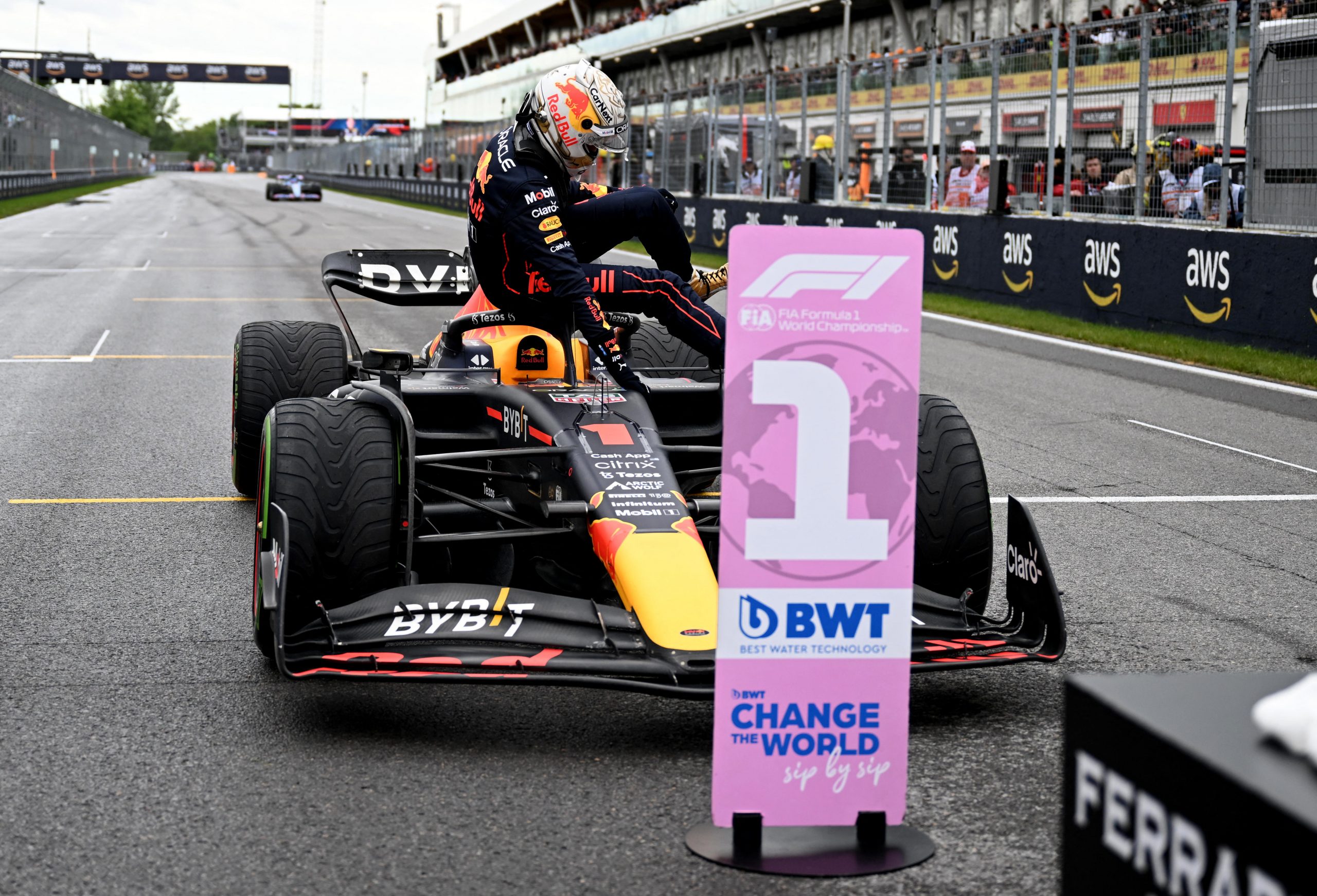 Max Verstappen claimed his second pole position of the season after expertly navigating what was a wet 2022 Canadian Grand Prix qualifying session.

The Red Bull driver was in a class of his own all session and his time of 1:21.299, set on his final lap, was a full 0.645s faster than his nearest competitor.

Joining him on the front row is Fernando Alonso, as the Alpine driver carried his strong form from FP3 to secure the qualifying result of the session and, perhaps, the season.

The Spaniard managed to snatch second from Ferrari‘s Carlos Sainz, who was on a blinding lap to end the session. Unfortunately for him, he couldn’t get the car settled out of the final corner, forcing him to settle for third alongside Lewis Hamilton.

“It feels great. It was an unbelievable weekend so far for us, thanks to the wet conditions,” Alonso said after qualifying.

“The car was mega. I’m so comfortable with driving this car and I think also the fans pushed me to make an extra push. I think I will attack Max on the first corner.”

He’s joined by George Russell, who was the lone driver to make the switch to slicks at the end of Q3, however he failed to improve his time after running off track.

Daniel Ricciardo and Zhou Guanyu round out the top 10.

With drivers making the switch to intermediates for Q2, it didn’t take long for the session to be stopped.

Although Alex Albon crashed and reversed out of the barriers at Turn 6, Sergio Perez wasn’t as lucky. The Red Bull driver went into the barriers between Turn 3 and 4, but unfortunately for him, he couldn’t find reverse, forcing him to end his day with the 13th fastest time.

That resulted in some furious action when the session resumed, but not for Lando Norris, who failed to set a time. The McLaren driver reported a power unit issue before the red flag period, and although he returned to the track with minutes to spare, he failed to set a time and finished 14th.

A strong effort by Ocon with little time remaining saw him climb into the top 10, resulting in Valtteri Bottas and Albon finishing 11th and 12th respectively.

Charles Leclerc made it out of Q1, but the Ferrari driver didn’t set a lap time during Q2 due to his grid penalty for Sunday’s race. He’ll start Sunday’s race 19th, ahead of Yuki Tsunoda, who finished with the slowest time in the first session.

There was no shortage of action during Q1 as all 20 cars took to the wet track. Despite the traffic, the session was completed without a red flag, though several drivers went off track at different stages.

The lap times began to tumble halfway through the session as a clear racing line began to form, with none of the frontrunners being caught out by the conditions.

Nevertheless, there were some shocks as Pierre Gasly and Sebastian Vettel both failed to make it out of Q1. The two drivers finished second and third respectively in FP3, however they couldn’t replicate that pace when it mattered most.

Aston Martin‘s disappointment was twofold as Lance Stroll finished with the 18th fastest time, one spot ahead of fellow Canadian Nicholas Latifi.