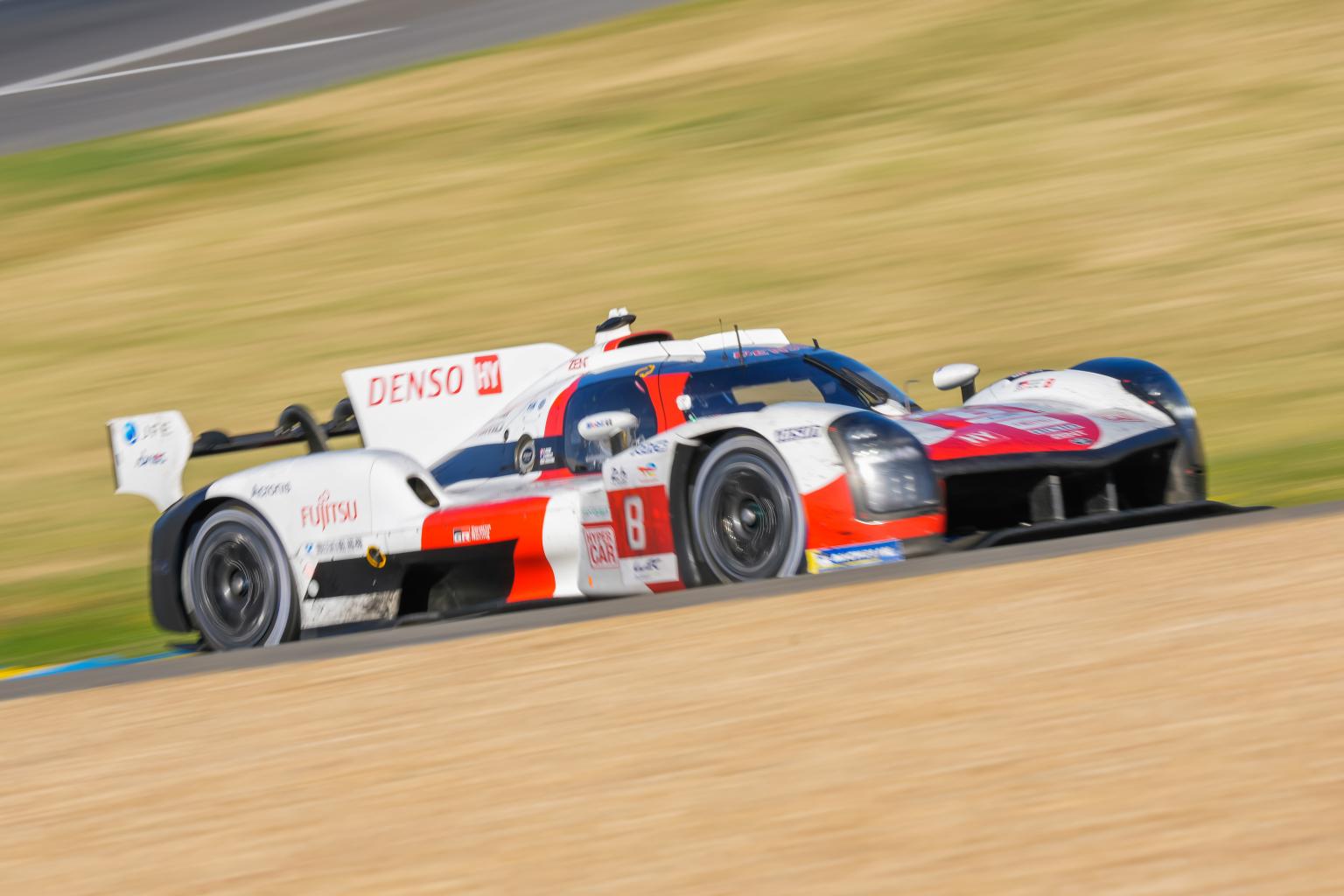 Toyota secured their fifth straight win at the 24 Hours of Le Mans as the Japanese manufacturer took a 1-2 at the Circuit de la Sarthe.

The #8 Toyota car driven by the team of former F1 drivers Sebastian Buemi and Brendon Hartley alongside Super GT’s Ryo Hirakawa were dominant throughout the race, with the squad comfortably faster than LMP1 challengers Glickenhaus and Alpine.

There was little to separate the two Toyota runners on pace, but the #7 car which came home second with Jose Maria Lopez, Mike Conway and Kamui Kobayashi behind the wheel lost over a lap to the leaders after a hybrid issue around 17 hours into the race.

Alpine, who currently have the overall lead of the World Endurance Championship, had a tough outing at their home race, with their A480 LMP1 car suffering a host of technical issues and ultimately taking the chequered flag back in 28th overall.

In the LMP2 class, the JOTA team similarly looked untouchable at the front, as the #38 Oreca 07-Gibson of Formula E driver Antonio Felix da Costa, Roberto Gonzalez and Will Stevens maintained the lead gained at the first batch of pit stops to take the win.

The victory was the first for JOTA since 2017, as the team came in over 2 minutes ahead of the nearest challenger, the #9 Prema Oreca of Robert Kubica, Louis Deletraz and Lorenzo Colomb.

The second JOTA car #28 of Ed Jones, Jonathan Aberdein and Oliver Rasmussen made it a double podium for the team, coming home 3rd in LMP2.

That third was helped by a crash of the WRT #31 entry, after Formula E driver Robin Frijns crashed overtaking a lower class car, bringing out the only safety car of the 24 hours.

In the final running of the GTE Pro class at Le Mans before it is replaced by GT3 racing from next year, Porsche secured a shock win after a pair of incidents took the favoured Corvette cars out of contention.

Porsche’s #91 car of Gianmaria Bruni, Richard Lietz and Frederic Makowiecki was left with the lead late in the race after Alexander Sims in the #64 C8.R Corvette flew into the barriers on the Mulsanne Straight following a collision with the AF Corse LMP2 car of Francois Perrodo.

That incident compounded a miserable day for Corvette, which had earlier retired the #63 car of Antonio Garcia, Jordan Taylor and Nicky Catsburg due to a suspension failure.

Porsche’s #92 car of Kevin Estre, Michael Christensen and Laurens Vanthoor had then looked the favourite to take the win, but also had to retire after a puncture put them out of contention.

While the #51 Ferrari 488 GTE Evo of James Calado, Alessandro Pier Guidi and Daniel Serra had inherited the lead ahead of the Porsche, that car eventually retired with a puncture, and from there the #91 maintained first for the rest of the race to take the win.

The final podium spot in the class went to the #52 Ferrari of Miguel Molina, Davide Rigon and Antonio Fuoco.

In the GTE Amateur class Aston Martin took the honours through the TF Sport entry of Marco Sorensen and Henrique Chaves, with a second car from the manufacturer from NorthWest AMR of Nicki Thiim, Paul Dalla Lana and David Pittard finishing 2nd a lap behind the leaders.