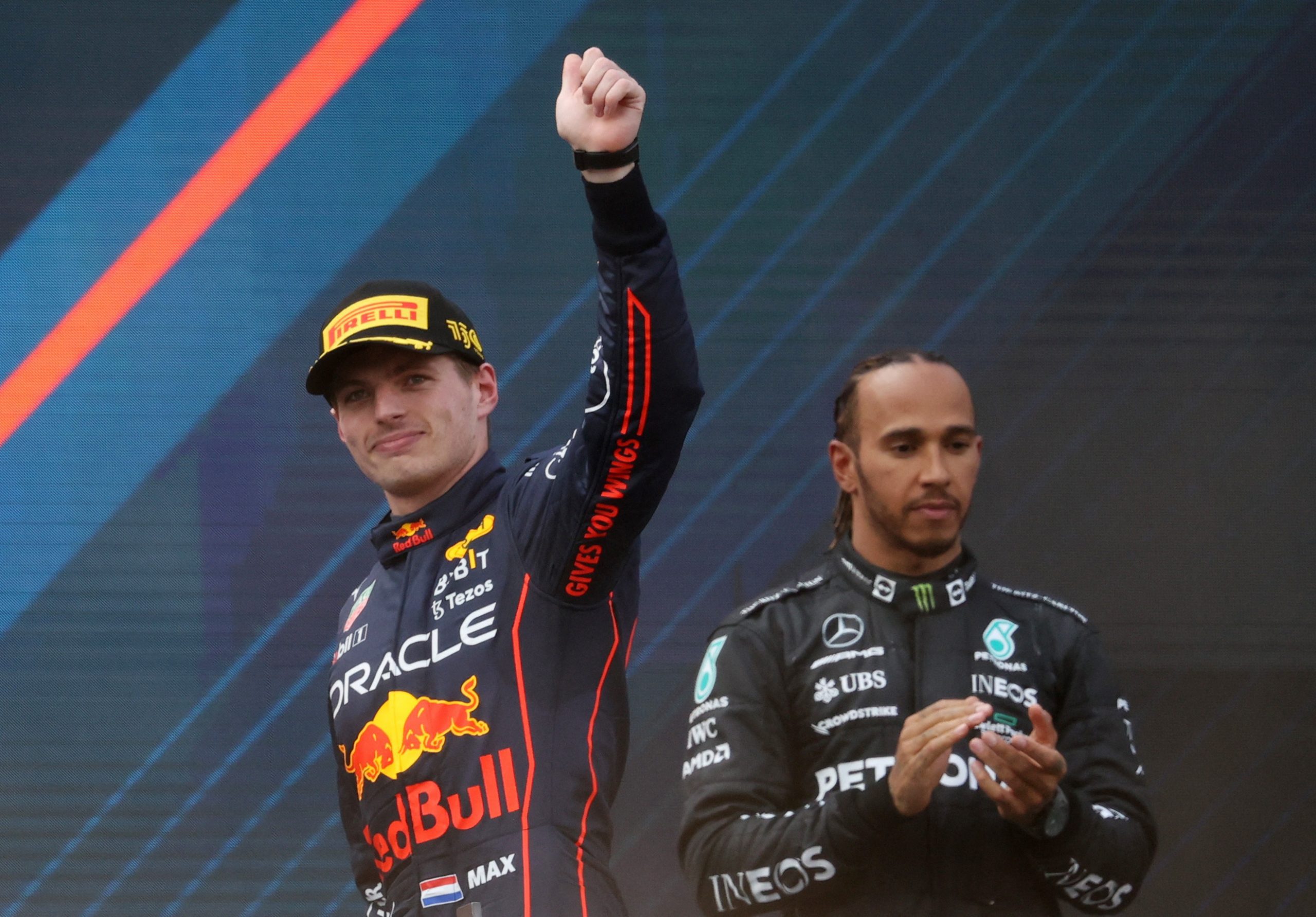 That awful feeling when you forget something, it’s horrible isn’t it. Well, we’re here to help, if it was Formula 1 moments in 2022 that you wanted to remember. Even if not, do read on!

Max Verstappen became a two-time world champion, Lewis Hamilton failed to win a race, Ferrari‘s title challenge crumbled and we also had some had first-time winners in Carlos Sainz and George Russell. We all know this.

But what about the things you didn’t know or simply forgot from an intriguing year of F1.

Mazepin was meant to drive

Nikita Mazepin kept his seat for 2022 despite a very poor rookie campaign but was forced out of F1 due to the Russian invasion of Ukraine.

Mazepin drove in the first pre-season test in Barcelona as his home country launched the attack, which led to Haas removing their sponsor Uralkali, which is a Russian-backed chemical company.

It then emerged that Mazepin’s father Dmirty Mazepin had links to Vladimir Putin and very quickly his son was gone.

In came Kevin Magnussen, who impressed immediately by finishing fifth at the season-opening Bahrain GP.

Meanwhile, Mazepin created “We Compete as One”, a foundation to support athletes excluded for political reasons.

Yes you read that correctly, F1 used a VAR (Video Assistant Referee) system in 2022 which was called the Remote Operations Centre.

This was announced in February following the dismissal of Michael Masi as race director due to the controversial events of the 2021 Abu Dhabi GP.

The FIA said the system would provide additional support to on-site race officials and become a valuable training and educational resource for of the next generation of race control staff and stewards.

They added its benefits will later extend to other FIA Championships and the wider international community of FIA National Sporting Authorities (ASNs).

How much this was used is anyone’s guess but we certainly heard nothing about it once the season got underway.

When Sebastian Vettel tested positive for coronavirus on the eve of the Bahrain GP, there was only one person who could replace him, Nico Hulkenberg.

Having filled in for Sergio Perez and Lance Stroll at Racing Point in 2020, Hulkenberg did another great job in Bahrain and Saudi Arabia.

He outqualified Stroll in Sakhir and was ahead in the Grand Prix in Jeddah. Fast forward nine months and Hulkenberg was announced as a Haas driver for 2023.

Alpine unveiled a special pink livery when they launched their car in February as part of their new title sponsor BWT.

Coincidentally, it looked very similar to the 2017 and 2018 Force India and Alpine had, funnily enough, just signed Otmar Szafnauer to be their new team principal. Szafnauer was in charge at Force India when they had a pink car.

Fernando Alonso and Esteban Ocon ran the pink livery in the first two races at the Bahrain and Saudi Arabian GP.

After that, Alpine reverted to the normal blue colours which we saw for the rest of the year.

Second free practice session at the Saudi Arabian GP was delayed after a missile from Yemen’s Houthi rebel group hit an Aramco facility just a few miles away from the track.

It was a scary time for everyone in the F1 paddock and there serious talks about abandoning the weekend that went long into the night.

The drivers debated with each other, the FIA and F1 for over four hours and it is understood the field were united to not race.

But, on Saturday morning, a statement from F1 announced the weekend would continue as planned.

“Formula 1 and the FIA can confirm that following discussions with all the teams and drivers, the Saudi Arabian Grand Prix will continue as scheduled,” read the statement.

“Following the widely reported incident that took place in Jeddah on Friday, there has been extensive discussion between all stakeholders, the Saudi government authorities and security agencies who have given full and detailed assurances that the event is secure.

“It has been agreed with all stakeholders to maintain a clear and open dialogue throughout the event and for the future.”

Lando Norris was the only non-Red Bull, Ferrari or Mercedes driver to stand on the podium which is a fantastic achievment.

Norris rode his luck in qualifying when he was third but spun in Q3 which meant nobody could improve on their final run.

He was excellent in the Sprint Race and the main Grand Prix though, especially in the wet on the Sunday.

The British driver didn’t have the car to shine as much as he did in 2021 but he took advantage of a mistake from Charles Leclerc to take third place at Imola.

Zhou Guanyu‘s horrific crash at the start of the British GP prevented something just as bad from happening later on Lap 1 because environmental activists made a protest by jumping the fence and sitting in the middle of the track on the Hanger Straight.

A safety car and red flag came out immediately when Zhou had his accident but it could have been much worse as the drivers could have been going at racing speed towards some fans.

They were taken away by police and although some drivers supported what they were protesting, the method was questioned.

Former England footballer Gary Lineker said: “Way more risk of death with climate change to everyone than there is attempting to delay a motor race.”

Martin Brundle hit back by tweeting: “Gary please don’t encourage this reckless behaviour. They’d have been sliced into 100 pieces and fans, marshals and drivers were wholly at risk of injury and death.

“We already had one lucky escape. I totally support freedom of speech and opinion, but do it responsibly.”

During second practice at the Japanese GP, Nicholas Latifi had a funny moment when he appeared to get lost in the wet conditions by turning too early going into the final chicane.

Latifi took an alternative route, 30 metres before the actual corner, and approached a dead end.

The Williams driver was scolded by fans when he came on the radio and said: “Not sure what happened there… the car… a little strange… anyways, I’m OK.”

He cleared things up to the media and revealed the radio message that was played out actually happened when he tried to pirouette the car, which he failed to do, so ended up reversing to get back in the right direction.

“It was totally my fault, but I was getting some calls from my engineer,” said Latifi. “We were supposed to do another lap but then we did a last-minute thing to box.

“I was changing something on my steering wheel, looking down, and when I looked up I saw the turn, which was obviously not the right turn!”

Whilst there was confusion over whether Max Verstappen had won the world championship or not, Sebastian Vettel and Fernando Alonso had an incredible photo finish for sixth place.

Alonso had been stuck behind Vettel for the majority of the race but went for a late lunge into the final chicane on the last lap.

The pair went side by side through the right and the left of the corner, before Alonso floored it to inch ahead.

But, Vettel was able to keep more on the power due to being on the outside line, so had more grip, and got back in front just before the line by 0.011 seconds.

Most people don’t watch practice sessions anyway, although F1 nerds like myself watch every second of the sport.

However, there were two FP2s that were literally forgettable because a blind tyre test was conducted at the United States and Mexico City GP.

The session was 30 minutes longer than usual with every driver running at least one of Pirelli‘s 2023 tyre compounds.

It meant the session was completely unrepresentative of the weekend’s pecking order, with no qualifying simulations and no idea what tyres are fuel loads teams were running.