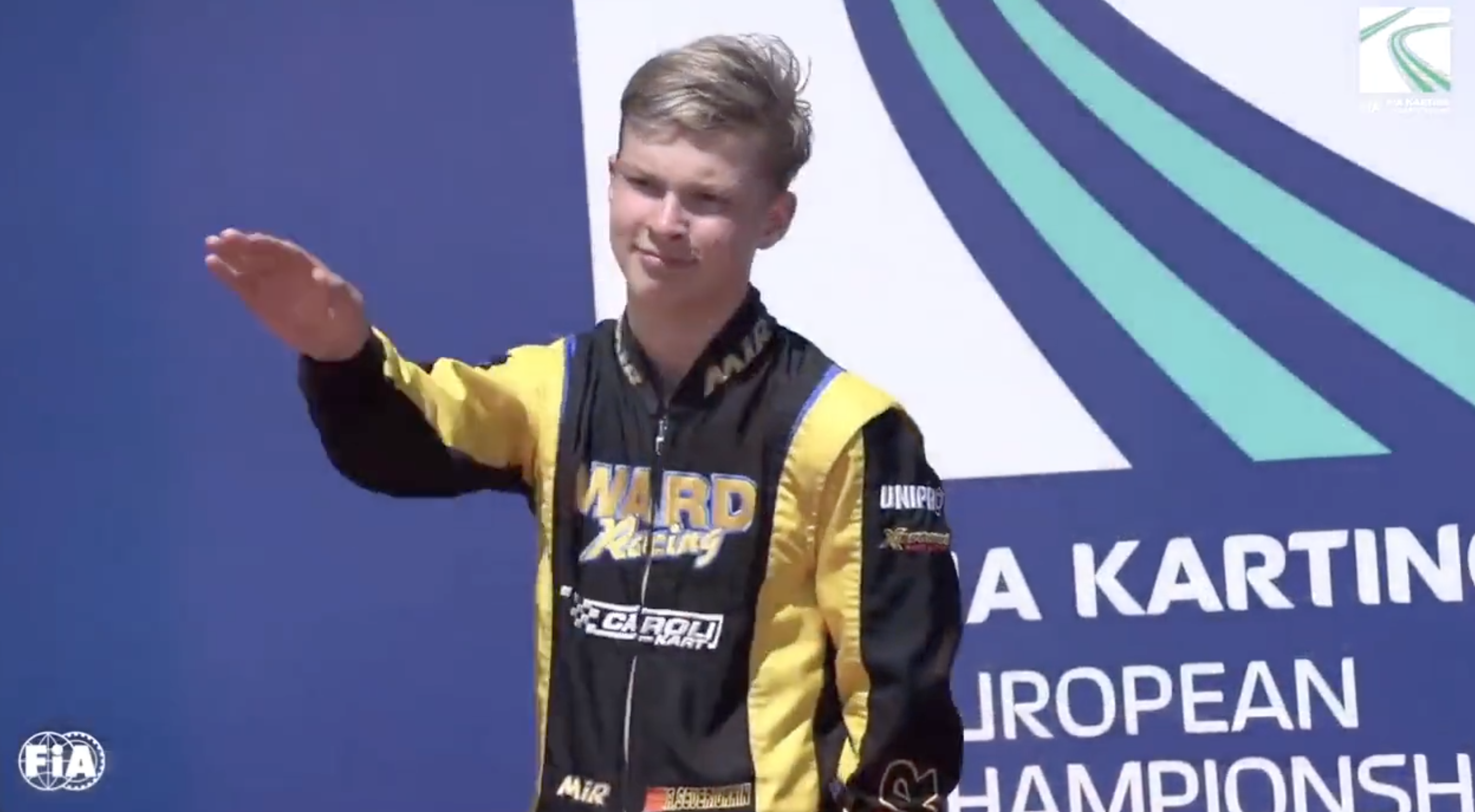 Artem Severiukhin, a Russian karting driver has caused huge controversy after making a Nazi salute while on the podium over the weekend, which has prompted an FIA investigation into his conduct, and despite an apology his team, Ward Racing, have terminated his contract.

Severiukhin won Round 1 of the FIA Karting European Championship in Portimao and was racing under the Italian flag due to the ongoing sanctions imposed on Russian drivers and athletes amid the Ukraine invasion.

As expected the action blew up on social media, with Severiukhin, who is just 15 years old, roundly condemned by motorsport fans and the community at large. The Russian has since apologised for his actions.

The FIA were quick to act and immediately issued a statement condemning the actions of Severiukhin and announcing an investigation into the Russian’s conduct.

“The FIA confirms that it has launched an immediate investigation into the unacceptable conduct of Mr Artem Severiukhin that occurred during the podium ceremony for the OK category at Round 1 of the 2022 FIA Karting European Championship at the Kartodromo Internacional do Algarve in Portugal,” the FIA statement read.

“The FIA will communicate shortly on the further steps that will be taken in this case.”

Severiukhin‘s team Ward Racing have already announced that the driver has had his racing contract terminated with the team following the incident. .

“Ward Racing is deeply in shame of the pilot’s behaviour,” a statement posted on Instagram read.

“The actions of Artem Severiukhin during the award ceremony on April 10, 2022 were exclusively individual and do not represent the views and values of Ward Racing in any manner.

“Ward Racing sees no possibility of continued cooperation with Artem Severiukhin and will proceed with terminating his racing contract.”

Amid the controversy, Severiukhin took to social media to apologise for his actions and denied he used a Nazi salute, though failed to offer an explanation as to what the gesture actually meant.

“I would like to apologise for what happened yesterday at the European Karting Championship,” Severiukhin said in a video posted on the Russian Automobile Federation’s Telegram channel.

“Standing on the podium, I depicted a gesture that many perceived as a Nazi greeting. But that’s not true, I have never supported Nazism and consider it one of the most terrible crimes against humanity.

“I can’t explain how everything else happened. I know it’s my fault, I know I’m stupid, and I’m ready to be punished. But please understand that I did not support Nazism or fascism with this gesture.”