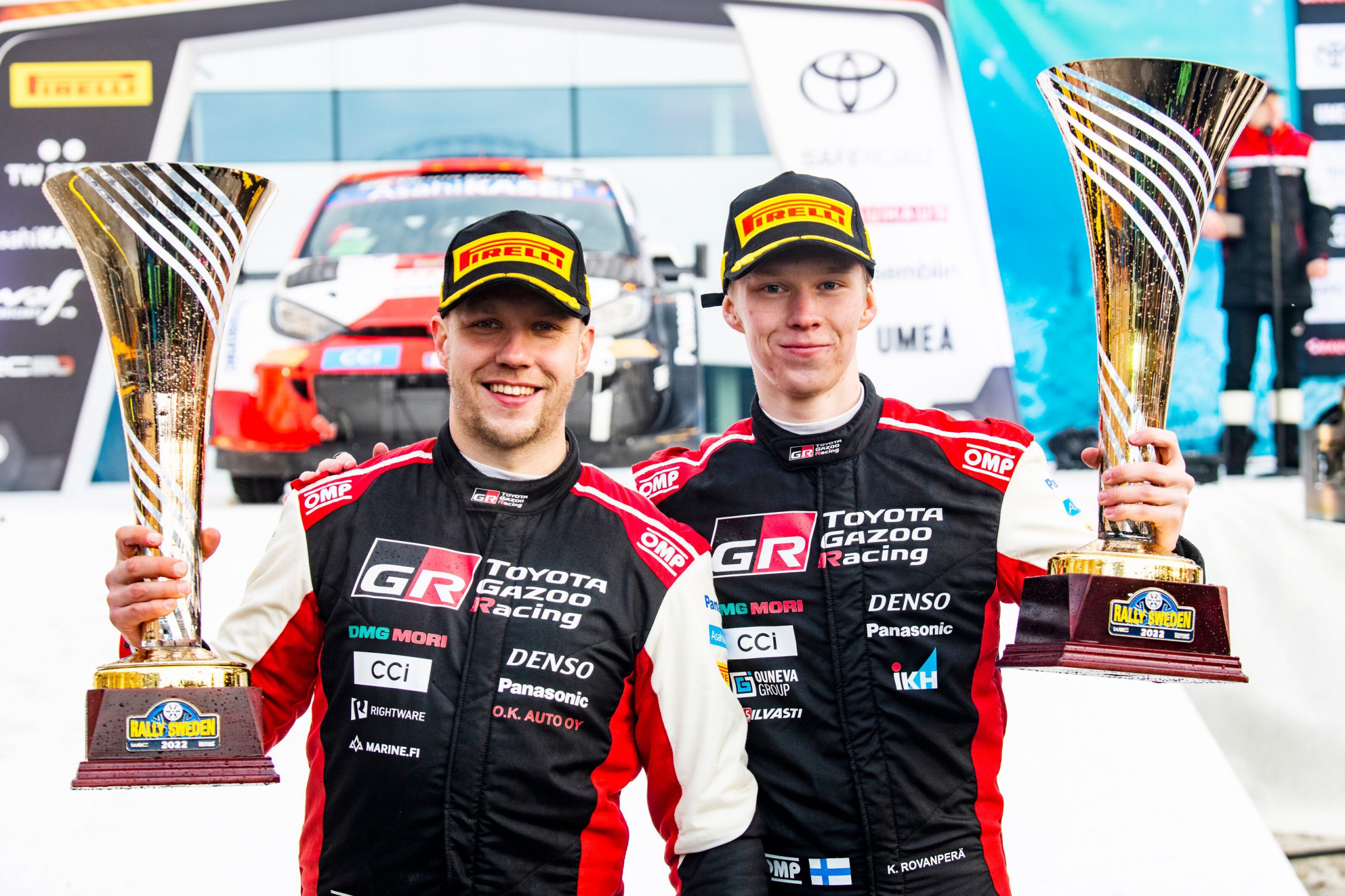 Toyota’s Kalle Rovanpera stormed to victory at Rally Sweden, with the Finnish driver fighting off the competition to take his third career WRC win.

Hyundai’s Thierry Neuville had led going into the second day of the rally on Saturday with a slender lead of 4.3 seconds, but Rovanpera fought back amid stiff competition to lead going into the final day.

The young driver was pushed hard by teammate Elfyn Evans in the sister Toyota, with the two jousting back and forth on the Saturday, but the Welshman’s challenge was ended by a wild finish on the night stage which earned him a 10 second time penalty.

Rovanpera said he was pleased with the victory following a tough fight with his teammate and the chasing pack and an underwhelming first outing in the Monte-Carlo Rally.

“After being the first car on the road on Friday, this is a really good result. It was a bit of a pity that Elfyn went out this morning because it was a great fight, but otherwise it’s a very good result for the team,” he said.

“I struggled a bit in the first rally with this car in Monte Carlo, but now I felt much more confident over the whole weekend with the car.

“Big thanks to the team because it has been a big job for them to make the car better all the time and make me comfortable.”

Despite the disappointment for Evans, it was a winning weekend for Toyota, with the purpose-built GR Yaris earning its first victory in the WRC and the team bouncing back from an agonising defeat to M-Sport Ford and the hands of Sebastian Loeb at the season opener in Monte Carlo last time out.

Rounding off the success for the Japanese outfit was a podium in third for Rovanpera’s fellow Finn Esapekka Lappi, with Nevuille splitting the two with his Hyundai in second.

The weekend marked the first time since 2006 that neither of the competition’s legendary Sebs- Sebastian Ogier and Loeb, had been behind the wheel of a WRC car.

British-based outfit M-Sport Ford had enjoyed a dream start to the season in the mountain stages of Monte Carlo, with returning legend Loeb beating out long-time rival Ogier in the Toyota to victory.

But the heroics were not to be repeated on the snowy roads of rural Sweden, with only Gus Greensmith’s car managing to finish the full length of the rally and come home in fifth.

Irishman Craig Breen twice was forced to stop, first with a crash and second with a technical issue with the car, while Adrien Formaux fresh off a major crash in Monte Carlo retired while running sixth with an electrical issue.

The 2019 WRC champion Ott Tanak was competitive in the early stages, pushing the Toyotas, but pulled out following an issue with his hybrid unit on the car while running in second on stage 5.

Next up the WRC returns to Croatia for the third round of the 2022 championship on 21-24 April.