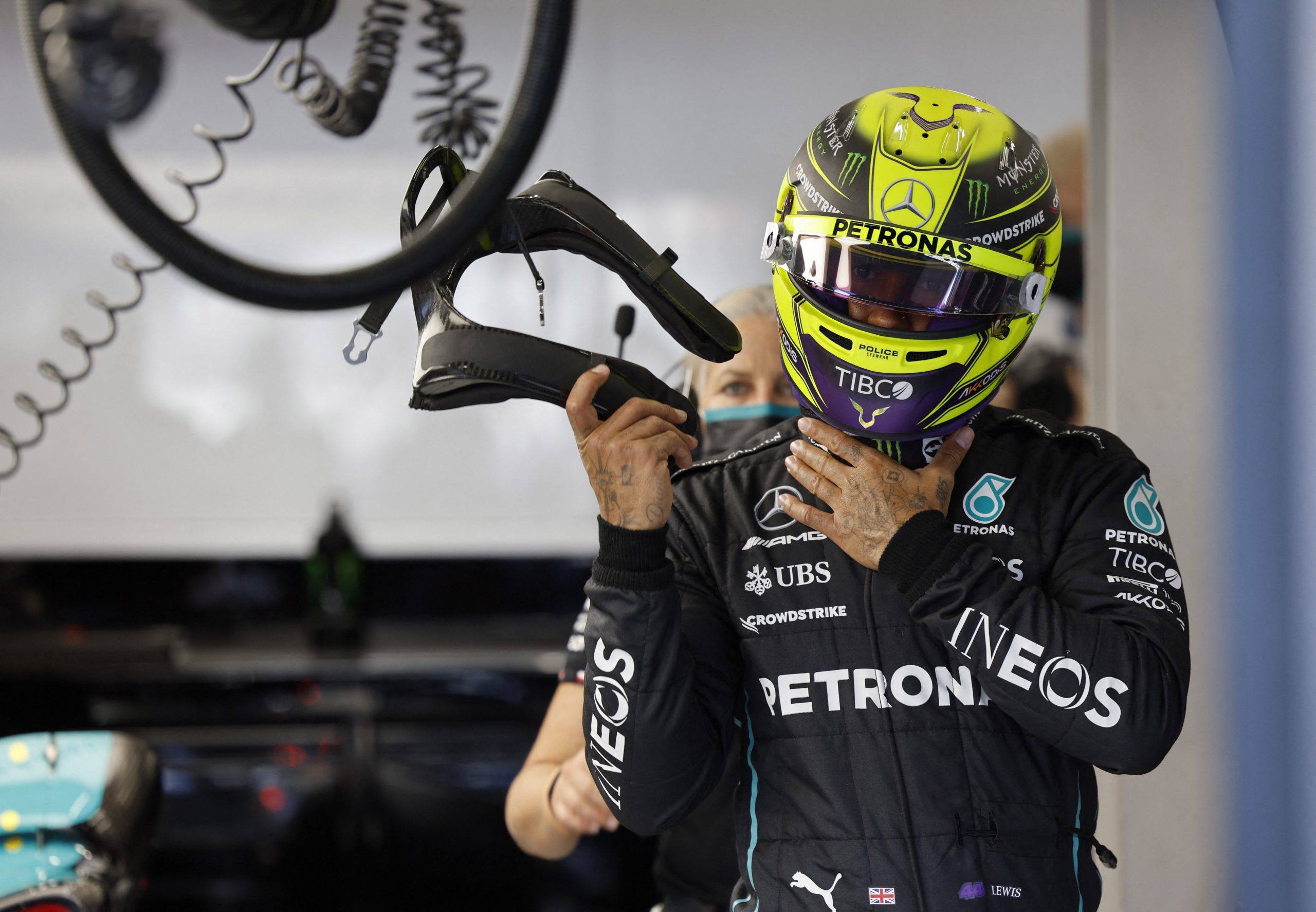 Arguably the biggest story from qualifying for the Saudi Arabian Grand Prix was Lewis Hamilton been knocked out in Q1, leaving the Mercedes driver down in 16th for Sunday’s race at the Jeddah Corniche Circuit.

Hamilton tried several times to improve his position, which he did to go 15th, but was demoted into the relegation zone by Aston Martin‘s Lance Stroll to exit the first part of qualifying for the first time since the 2017 Brazilian GP.

Mercedes were expected to still be off the pace this weekend compared to Red Bull and Ferrari, but to be eliminated in Q1 is a new low for a team that’s won the last eight constructors’ championships.

The big question is whether there will be more results like Hamilton‘s qualifying in Jeddah, or was it a one-off?

What has Lewis Hamilton had to say?

Hamilton apologised to his engineer Peter Bonington on the team radio when told he failed to reach Q2.

He was short for words when speaking to the press post-qualifying, but stated the W13 was nervous.

“I just struggled with the balance of the car and [I’m] not where I want to be,” Hamilton told Sky Sports F1.

“It’s something in the set-up. It was looking good in FP3 and we tried to progress in a similar direction. Maybe we went too far and then the car was undriveable. It’s so nervous.”

Where did it go wrong for Hamilton?

Hamilton‘s best time in Q1 was only two tenths of a second quicker than his 1:30.513 from the second practice session on Friday.

He clearly lacked the confidence to really push his car, whilst everyone else found time from Friday.

The seven-time world champion was 0.663 seconds slower than teammate George Russell in Q1, and appeared to be slower everywhere.

“That’s the second race of the season and another confirmation that we are not where we want to be, and need to be,” said Mercedes team principal Toto Wolff in a press release.

“On Lewis’s side we experimented with a setup that was worse, and the consequence was there was no rear grip and the car became undrivable.

“For George, I think today was a good effort considering we only had one soft tyre for Q3, so a solid job from him. Nevertheless, the optimum scenario for us today was the no-man’s-land between the Red Bull and Alpine, and that’s certainly not acceptable.”

To have a car which is relatively slow, to what Mercedes usually expect, and is sensitive to setup or changing conditions, is a horrible combination in F1. The next races will tell us if Mercedes are in this tricky situation.

Mercedes losing time on the straights

The Bahrain GP saw all Mercedes-powered cars were down in the speed traps, and this trend has continued in Jeddah.

Hamilton was 17th in the fastest speed trap in qualifying, 10.7km/h slower than pole-sitter Sergio Perez, who had the best straight line speed.

It’s no coincidence that Aston Martin, McLaren, Williams and Mercedes are in the bottom half of nearly every speed trap chart, suggesting the Mercedes power unit is lacking raw grunt compared to the Renault, Ferrari and Red Bull engines.

However, Hamilton‘s time loss cannot just be put down to a straight line speed deficit. He clearly went the wrong way with setup and the team are no closer to understanding the porpoising and handling issues of their 2022 car.

“We know we aren’t quick enough at the moment and Lewis exiting in Q1 is just a symptom of that,” said Mercedes trackside engineer Andrew Shovlin. “We struggled here on single lap pace, it was more of a challenge than Bahrain and we weren’t fast enough in Bahrain.

“The porpoising is priority number one because it’s preventing us from running the car where we want it. We’ve got some avenues which are giving us good direction but it’s taking us time to get those as parts on the car.

“We’re leaving no stone unturned and every day we run, we’re learning.”

Mercedes tried various floors during Friday practice for the Saudi Arabian GP, as they did in Bahrain, yet none of them work. If this continues in Melbourne, the likelihood is the W13 has a fundamental problem.

What can Hamilton do in the Saudi Arbian GP?

Given Hamilton‘s lack of straight line speed, he may even struggle to score points and will be relying on strategy to move up the order.

He didn’t exactly have amazing tyre wear in Bahrain, and the Grand Prix is likely to be a one-stop race so his strategy options are limited.

“The car did look better in race spec yesterday than on single runs, so we’re hopeful we’ll have a better package in the race, ” said Shovlin. “We know the races here don’t normally run to plan so there’s lots of opportunity to move forward and we’ll no doubt gain some useful knowledge along the way.”

Fortune such as a well-timed safety car or red flag are likely to be the only ways Hamilton can get into the top six, to salvage a reasonable result.

Should it be a race with little chaos, Hamilton might find himself outside the top 10 on merit.