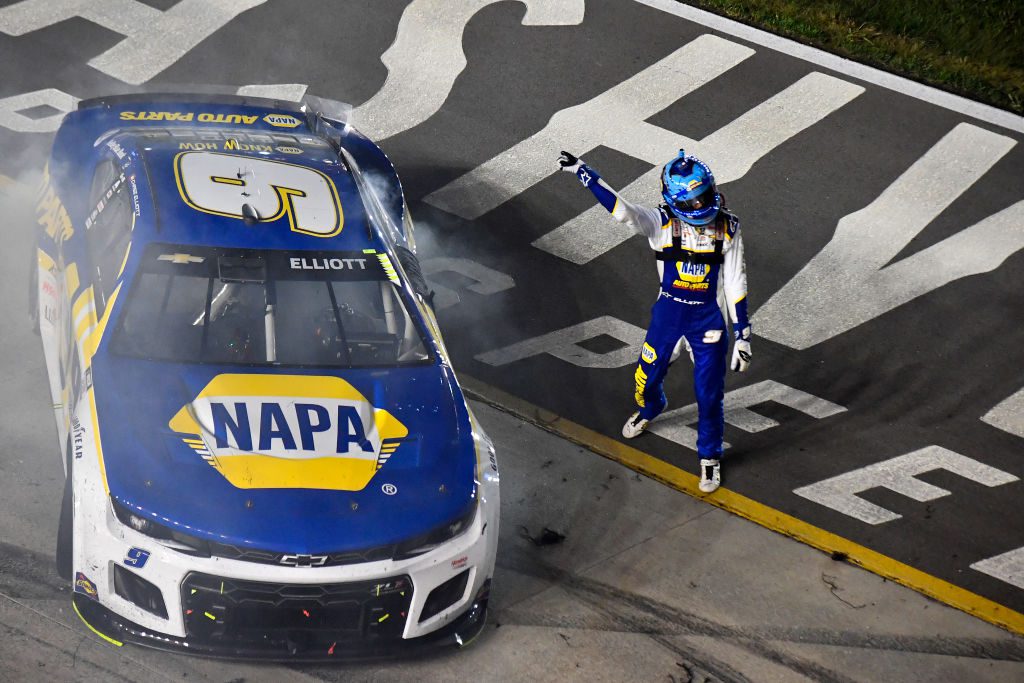 Hendrick Motorsports driver Chase Elliot fought his way back the order, after a delayed pit stop, to claim victory at NASCAR’s Ally 400 held at the Nashville Superspeedway.

The Ally 400 faced two weather-related delays meaning that the race was only conducted on Sunday night. The enforced delay worked to the drivers’ advantage with midday temperatures touching over 90 degrees Fahrenheit, with many expecting the race to be a grueling affair, much like the Xfinity Series truck race that took place prior to the main event.

Pole man Denny Hamlin, led a race-high 115 laps, with the #11 Toyota Camry driver leading when the race was first halted due to the lightning strikes and eventual storm that hit the venue. Following the restart and two more caution periods, Hamlin would lose the lead of the race to Toyota teammate Martin Truex Jr, who himself would lose the lead to Elliot during the race’s final third.

Once at the front, Elliot would build a one-second lead over the Toyota trio of Kyle Busch, Hamlin, and Truex before an engine failure for Josh Bilicky negated his advantage. Elliot would hold off the challenge from Busch at the restart, claiming the win by a little over five-tenths of a second.

“I’m so proud of our team,” Elliott said after the race.

“We had a setback about halfway, but we were able to get the NAPA Chevy dialed back in and get back in the mix. It was a long day, a fun day… I’m so proud of our team. We’ve had a pretty rough month, month and a half. It’s just nice to get back going in the right direction.

“Getting a win is always huge. To do it in a really cool city like Nashville is even better. I’m looking forward to that guitar (trophy).”

Busch for his part admitted that he made several mistakes over the course of the 300-lap race.

“I wanted to throw some fenders, but I didn’t get the job done,” Busch commented.

“Everybody will be smiling, but I let them down. I should have come up with a better plan. We were going to stay out no matter what, and I needed to start throwing fenders to move people around. I didn’t get after it, and I made too many mistakes and didn’t stick with our strength.

“I’m not going to say what our strength was, but we did a lot of things good.

“We didn’t have one exceptional item. We’re second with our Toyota Camry. I want to do it over, but you don’t get those at this elite level and Chase got the job done.”

With his win in Nashville, Elliot claimed the 15th win of his career and the second of his 2022 Cup Series season. The win moves Elliot to the top of the regular season standings displacing Trackhouse’s Ross Chastain.