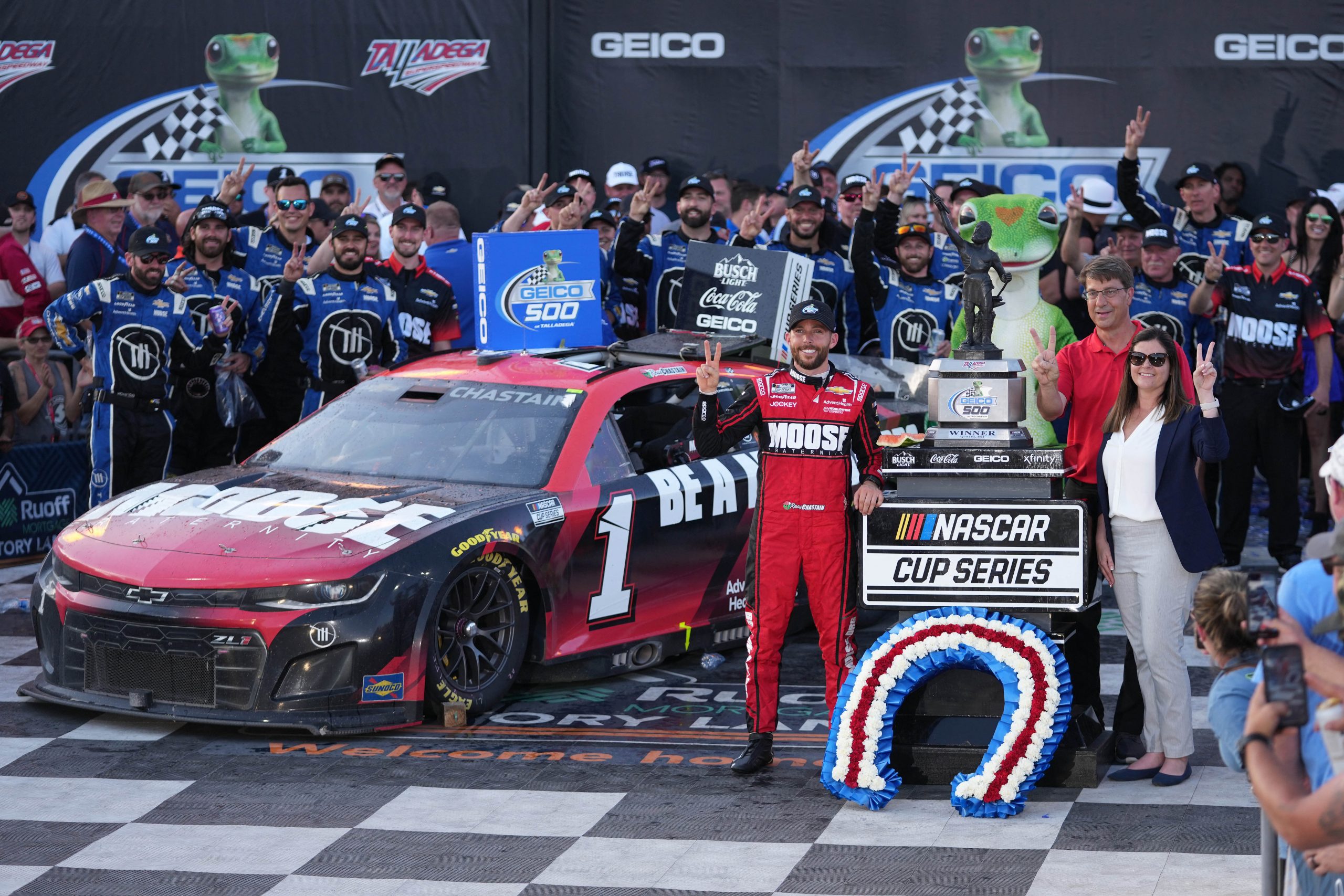 Racing for the Chip Ganassi Racing Team, Ross Chastain kept his cool during a frantic last lap to claim victory at NASCAR‘s Gieco 500 held at the Talladega Superspeedway.

The win marked Chastian’s second win this year and moves the Chevrolet driver into second in the standings after a crazy race that saw leaders Erik Jones and Kyle Larson throw away their chances at winning by battling each other.

While Chastian drove a hard and aggressive race, the onus was on Jones to bring home team Richard Petty’s first win in the series since 2014. Jones came under increasing pressure from Hendrick Motorsport’s Kyle Larson, with Larson moving towards the outside of the oval in order to get the jump on Jones.

Sensing the move by Larson, Jones decided to follow suit and cover the attack from Larson, which in turn opened the door for Chastian to make his move. The Chip Ganassi driver kept his cool overtaking both Larson and Jones to claim his second win in NASCAR.

Larson would eventually end up fourth with Jones dropping down to sixth with Austin Dillion and Kyle Busch leapfrogging the pair during the ensuing melee.

“I’m always the one going to the top too early and making the mistake,” Chastian said to Fox Sports at the end of the race.

“There at the end it was like eight to go, and I was like ‘I’m not going up there again … I’ll just ride on the bottom. I’m not gonna lose the race for us.’ They kept going up, and they just kept moving out of the way!”

Jones was left wondering what might have been, with the Richard Petty driver regretting his decision to cover off Larson as the field made its way around the final corner. The decision ultimately dropped Jones down to sixth after what looked like an assured win.

“Looking back, I wish we would have stayed on the bottom and let the No.1 push me,” Jones told Fox Sports.

“I didn’t realize they were coming with that much speed. Try to defend on the No.5, you’re too far ahead already. Obviously a defense on the No.5 kind of gives the door to the No.1.

“It is what it is. You’re trying to just win the race. You can only see so much of what’s going on from the seat, and you’re trying to make the best decision you can in the last 1500 feet.”

Defending champion Larson was content with a top-five finish at Talladega with the American generally struggling on superspeedway circuits. His fourth place marked the first-ever time he finished in the top five at either Talledega or Daytona.

“I feel like I did a near-perfect job for me at a superspeedway until the last lap there,” Larson told Speedway Digest after the race.

“I think just kinda faked going high, then went back low. I had that run. Ross helped me with that run. It kinda baited me into going to the outside. A bit of inexperience probably there.

The results from the Talledega 500 leave Chastian in second place in the standings behind William Byron, who finished 15th. With Talledega in the bag, the series now moves to Dover Motorspeedway in a week’s time.