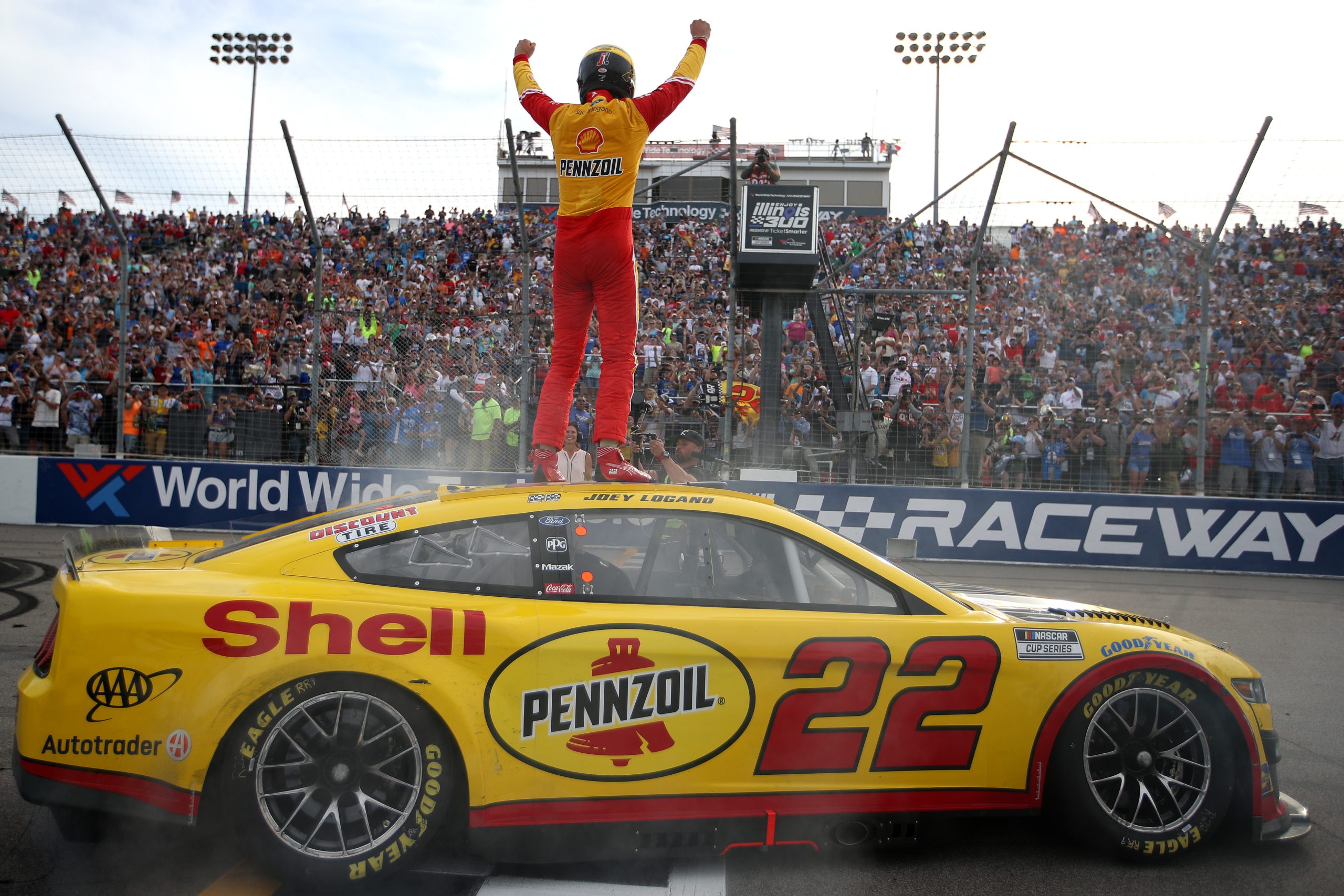 Pole-sitter Chase Briscoe led the early stages of the race before a puncture dropped the Stewart-Haas driver out of contention. Trackhouse’s Ross Chastin was at the center of controversy with the Chevrolet Camaro driver involved in two separate incidents with Denny Hamlin and Chase Elliot.

How the race was won

The first-ever NASCAR Cup Series race at the Gateway was a thrilling affair with the race needing an overtime restart after Kevin Harvick’s Ford Mustang was pitched into the wall after suffering issues with his brake rotor on lap 236 of the 240 lap event.

The restart saw Busch and Logano battle for the lead with Ford driver Ryan Blaney providing his teammate Logano with a timely shove that ultimately helped him prevail over Busch by .655 of a second.

“Thanks for coming out, guys,” Logano said to the crowd after his win.

“I hope you enjoyed that race. It doesn’t get much better than that. Racing for the lead like that with Kyle, one of the best. It was a lot of fun. Crossing each other back and forth. I knew it was coming. I did it to him; I knew he was going to do it to me. We crossed back and forth there a couple of times.

“What a great car, though. Really fast. I kind of messed up in qualifying, and (crew chief) Paul (Wolfe) made a great call putting two tires on (during the No. 22 Team Penske Ford’s final pit stop). Blaney did a great job with the push down into (Turn) 1, which kept me close at least and being able to make the move. Good racing there.”

Despite the thrilling conclusion to the race, the incidents involving Chastain were a serious talking point.

The Trackhouse driver first bumped Hamlin’s Toyota off the track on Lap 64, with Hamlin showing his displeasure by pushing Chastain down the apron on the backstraight.

The 101st lap saw Chastain at it again, with Elliot now the victim of Chastain’s recklessly driving.

Chastain though was apologetic about his driving standards and noted that some form of revenge maybe exerted later in the season.

“It’s one thing to do it once, but I just kept driving into guys and at this level, I’m supposed to be better than that. Just a shame for Moose and Advent Health and Jockey and Worldwide Express. And to have all these people believing in me, (Trackhouse Racing owners) Justin Marks and Pitbull to put me in this car, they deserve better.

“I owe half the field an apology. And words aren’t going to fix it, so I’ll have to pay for it on the track and almost did today. And I deserve everything that they do. I just can’t believe that I continue to make the same mistakes and overdrive the corners and drive into guys.

“I had time under caution to get reset, and we go green and I drive into somebody. That’s terrible.”