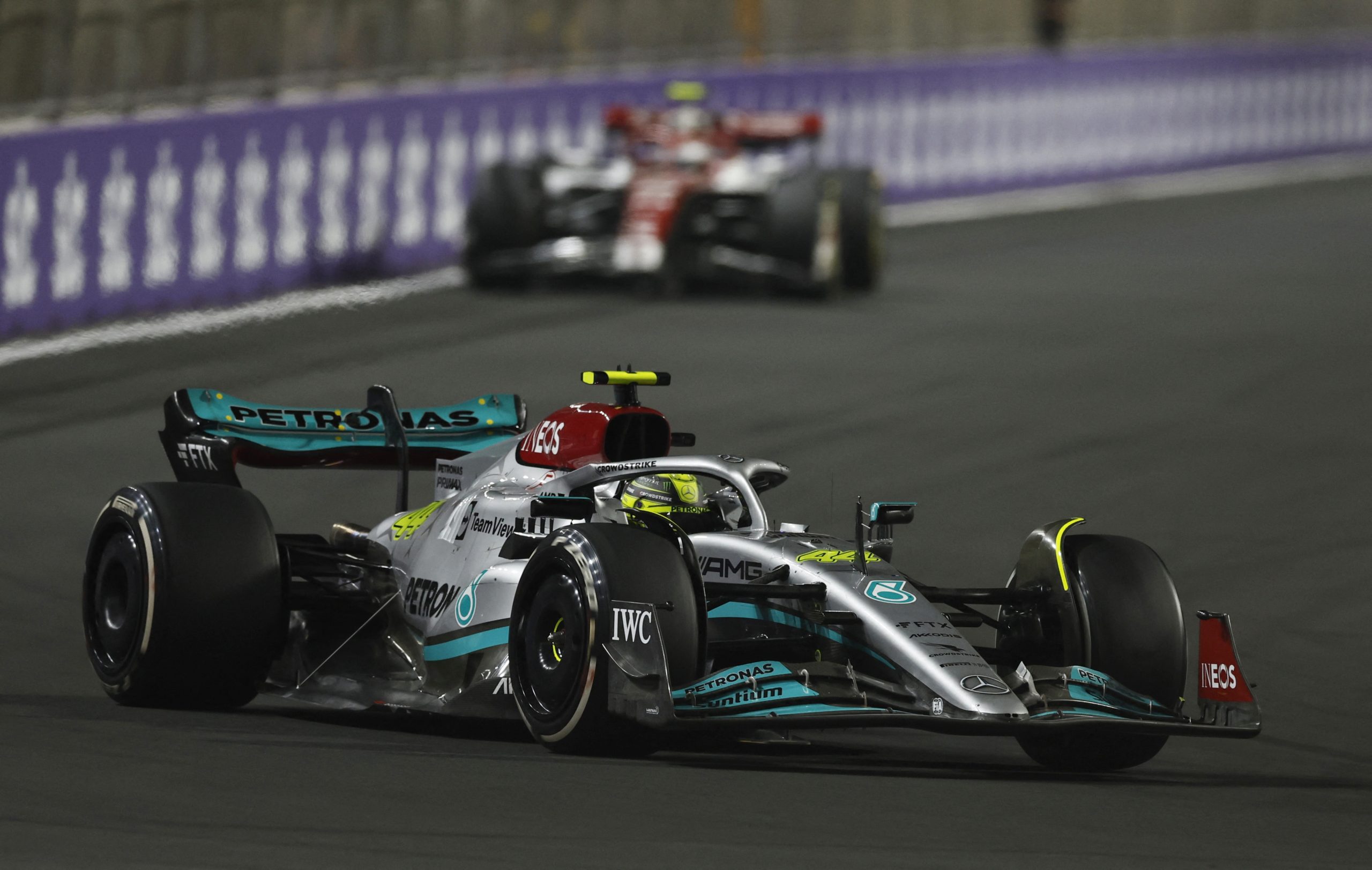 You could hear the mix of sarcasm and disappointment in Lewis Hamilton‘s voice as he spoke with race engineer Pete Bonnington following the 2022 Saudi Arabian Grand Prix.

“Is there even a point for that position?” he asked after crossing the line in an unfamiliar 10th position.

After claiming an unexpected podium finish in Bahrain, there was no magic, or Red Bull DNFs, to save Hamilton in Jeddah. His weekend went off the rails as early as Friday, when he just couldn’t find the right setup for his W13.

The difficulties only snowballed from there. Hamilton failed to make it out of Q1 in qualifying, marking the first time since the 2009 British Grand Prix he’s been eliminated that early on pure pace alone.

Back then he was still at McLaren, while Sebastian Vettel still hadn’t won a World Championship. It was so long ago that last year’s champion Max Verstappen was just 12 years old.

Hamilton not used to F1 struggles

Further misery came on raceday, Hamilton‘s 10th place finish giving him his lowest haul of points after two races since the current scoring system was introduced.

A deeper dive shows that in terms of results, third and 10th are his worst to start the year since 2009, when he was disqualified in Australia and then took seventh in Malaysia. The silver lining then was that he crossed the line third in Melbourne before being penalised.

This year, there isn’t much Hamilton can do to mask what’s taken place on track. The podium finish in Bahrain was celebrated like a victory of sorts, especially since the Brit and his Mercedes team had low expectations heading into the weekend.

The euphoria was also aided by the sight of rival Max Verstappen’s Red Bull crawling back to the pit lane with a handful of laps remaining, last year’s championship disappointment still fresh on everyone’s mind in the Silver Arrows garage.

A week later, and the story in Jeddah was much different. Given how far both Mercedes cars finished behind the two Red Bull and Ferrari cars, the opening race celebrations may have been justified.

Just as McLaren and Ferrari celebrated their occasional podium finishes with gusto last year, Hamilton and Mercedes may have to come to terms with being the third force on the grid.

You only have to look back at four months ago when the first ever Saudi Arabian Grand Prix was held in early December. Hamilton finished that weekend with pole, fastest lap and the race victory, but none of those achievements were realistically possible at this year’s race.

While Mercedes‘ eye-catching sidepod design turned heads in preseason testing, the fact is the team have been nowhere close to matching the pace shown by Red Bull and Ferrari after two races. It’s why Team Principal Toto Wolff branded the their qualifying performance on Saturday as “unacceptable”.

The team have been unable to get on top of the severe porpoising that have hampered the W13, and as a result, they’ve had to comprise their set-up in order to control the excessive bouncing at high speed.

Perhaps more worrying for Hamilton is that teammate George Russell believes solving the porpoising problem will cure much of their woes, a sentiment he doesn’t share.

“We’re still really down on speed on the speed trace,” Hamilton said. “I don’t know if that is just one fix or several things, I don’t know how much drag we have compared to others, but it feels like a lot.”

It’s a statement that suggests Hamilton has some ways to go before he turns his attention to catching Verstappen and Charles Leclerc. Unlike previous seasons when the Brit always had the better of Valtteri Bottas, Russell hasn’t joined the Brackley outfit to simply serve as an understudy.

Thus, Hamilton‘s immediate goal at F1’s next stop in Australia will be to get on top of the W13, and reestablish the hierarchy everyone took for granted at Mercedes heading into the season. Unfortunately for him, Red Bull and Ferrari aren’t going to sit around idly.

An eighth World Championship was the goal for Hamilton heading into 2022. It’s the only way to put last year’s Abu Dhabi debacle well and truly behind him. Instead, those plans may already be out the door after just two races.