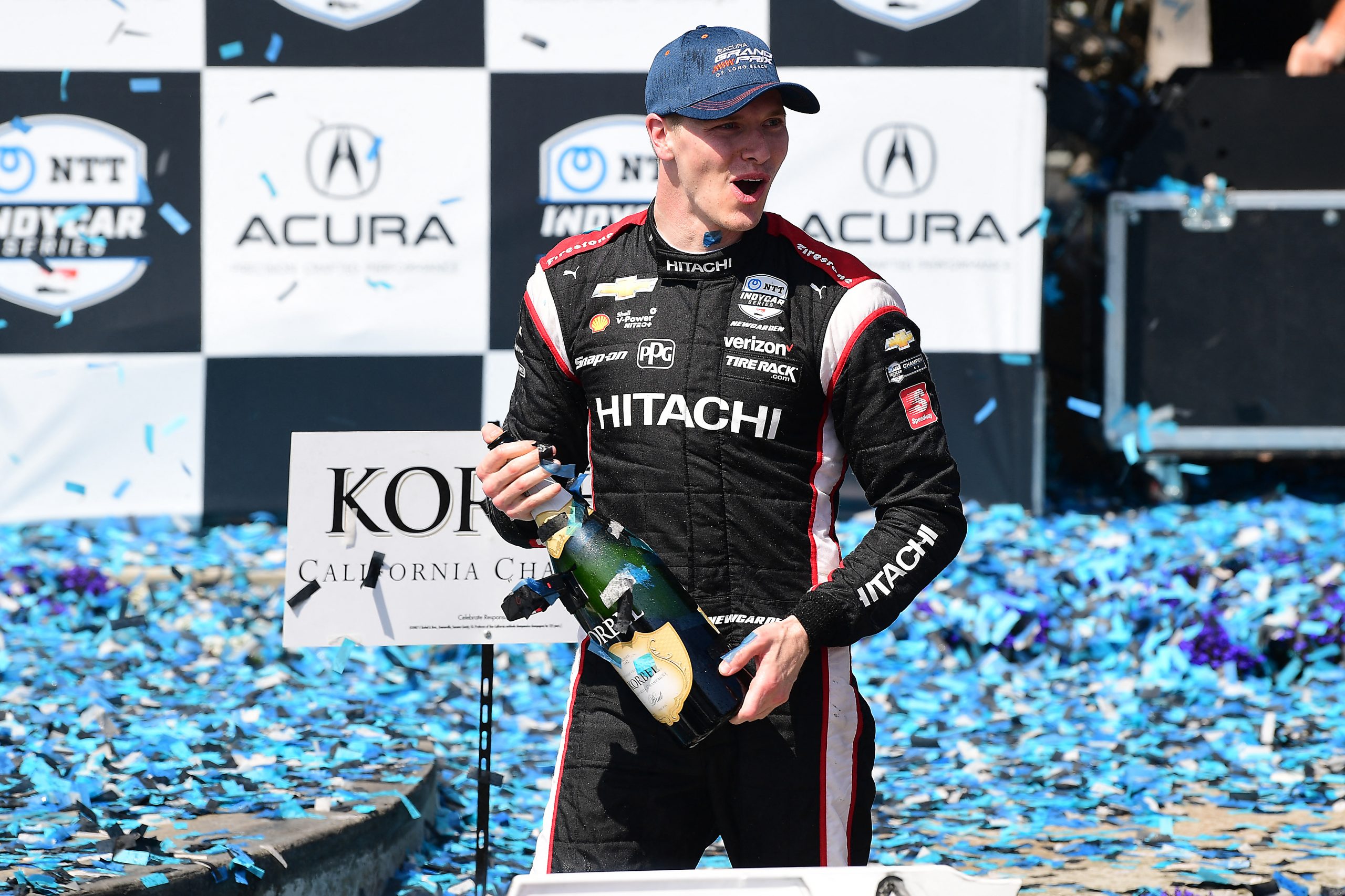 Josef Newgarden won IndyCar‘s annual race at Long Beach to make it back-to-back victories, but it was far from easy and it required a spectacular performance from the Penske driver to beat Romain Grosjean and Alex Palou.

Colten Herta was the big favourite for the race, having topped each of the three segments of qualifying to take pole position, by nearly a massive half a second from Newgarden.

However, the race became a strategic affair and Newgarden used all of his experience to win the 22nd IndyCar race of his career and take the lead in the championship.

Running in third place, Palou triggered the first round of pit stops with a rapid in lap and a very quick pit stop at 7.6 seconds.

Newgarden responded two laps later, only to come out three seconds behind Palou. Crucially, he undercut Herta, who had a relatively poor 9.3-second pit stop.

Pit stops have been a problem for Herta‘s pit crew this season, after both of his final pit stops at the opening round in St Petersburg and the oval race at Texas saw problems for the Andretti driver’s team.

Herta was visibly on the attack, as he questioned how he ended up in third. It didn’t faze Newgarden though, as the two-time IndyCar champion stayed smart and didn’t use up too much of his push to pass. Unlike Herta, Newgarden was driving more smoothly and it paid dividend later in the race.

How Newgarden got ahead of Palou

Whilst the undercut worked at the first round of pit stops, it was the overcut that made the difference.

Palou was the first of the leaders to pit, so Newgarden and Herta began to push in an attempt to get the jump on the Spaniard.

Just like Nashville last year, Herta cracked by braking too late at Turn 9 and hitting the wall hard as a consequence. In an instant, Herta was out of the race.

“It was just a stupid mistake,” said Herta. “We running in third, keeping up with Alex and Josef so it’s unfortunate. I feel really bad. The car was fantastic and I just overdid it a little bit.”

Meanwhile, Newgarden made the most of his Firestone rubber which he had saved to make a big push on his in lap. When he made his pit stop, Newgarden just came out ahead of Palou, but was on cold tyres against the defending IndyCar champion.

Palou looked left and right but Newgarden withstood the pressure and smartly used his push to pass, just like he did against Herta. Newgarden‘s racecraft and defence was top notch and it was the key moment of the race.

“The out lap with Palou was risky,” said Newgarden. “We got together at Turn 5 going in deep and that almost didn’t work out, when we went side by side into there and then into Turn 6. That was the difficult battle.”

A spin for Simon Pagenaud at the iconic Long Beach Dolphin Fountain at Turn 3 brought out the Safety Car and gave Newgarden some reprieve, but he had more work to do.

The Safety Car gave Romain Grosjean an opportunity to attack the leaders because the former Formula 1 driver was on reds (soft tyres) whilst everyone else was on the primary black tyre.

Marcus Ericsson was running in third until he tagged the wall and retired from the race, so Grosjean moved from fourth into the podium places.

Grosjean was on a big charge and aggressively fought his way past Palou. Very quickly, Grosjean was threatening Newgarden for the lead and the latter made a mistake at Turn 6 by running wide.

Newgarden‘s wide moment put Grosjean alongside him, but he had to tuck back in behind because he was on the outside going into Turn 7. Grosjean then ran out of push to pass and used the best of his softer Firestone rubber, whilst Newgarden had four seconds of his extra power to spare.

Grosjean had a great restart and was right on Newgarden‘s tail, so the Penske driver used his last bit of push to pass to hold the inside and keep the Frenchman at bay.

Once again, Newgarden mastered the cold tyres and he didn’t make any mistakes this time so was able to withstand Grosjean‘s attack.

The race ended with half a lap to go due to a crash for Takuma Sato, so Newgarden won consecutive races for the first time since 2017 with a phenomenal drive.

“This was a fight today, it was not an easy race to win,” said Newgarden. “I was working my butt off with Grosjean at the end.

“I just tried to hold him off at the restart and it was super difficult. This Hitachi car though was on it. We knew coming into the race we would have a good strategy, make good fuel and we’d be alright. So I’m proud of team Penske.”

A difficult start to the season for Newgarden has been reversed with a last lap race-winning pass on Scott McLaughlin in Texas and his first victory at Long Beach. He leads the championship by five points from McLaughlin and is 15 points ahead of Palou.

Will Power and Scott Dixon are right in the mix too in third and fourth, whilst Grosjean has moved up to fifth in the Drivers’ Championship, just 43 points behind Newgarden.

The Indy 500, as always, will be a double points event and there are two other events in the month of May – Barber Motorsports Park (May 1) and the Indianapolis Road Course (May 15).

Those five weeks will decide which drivers are truly in championship contention, but it’s safe to say Newgarden has got the momentum heading into the most important period of the season.