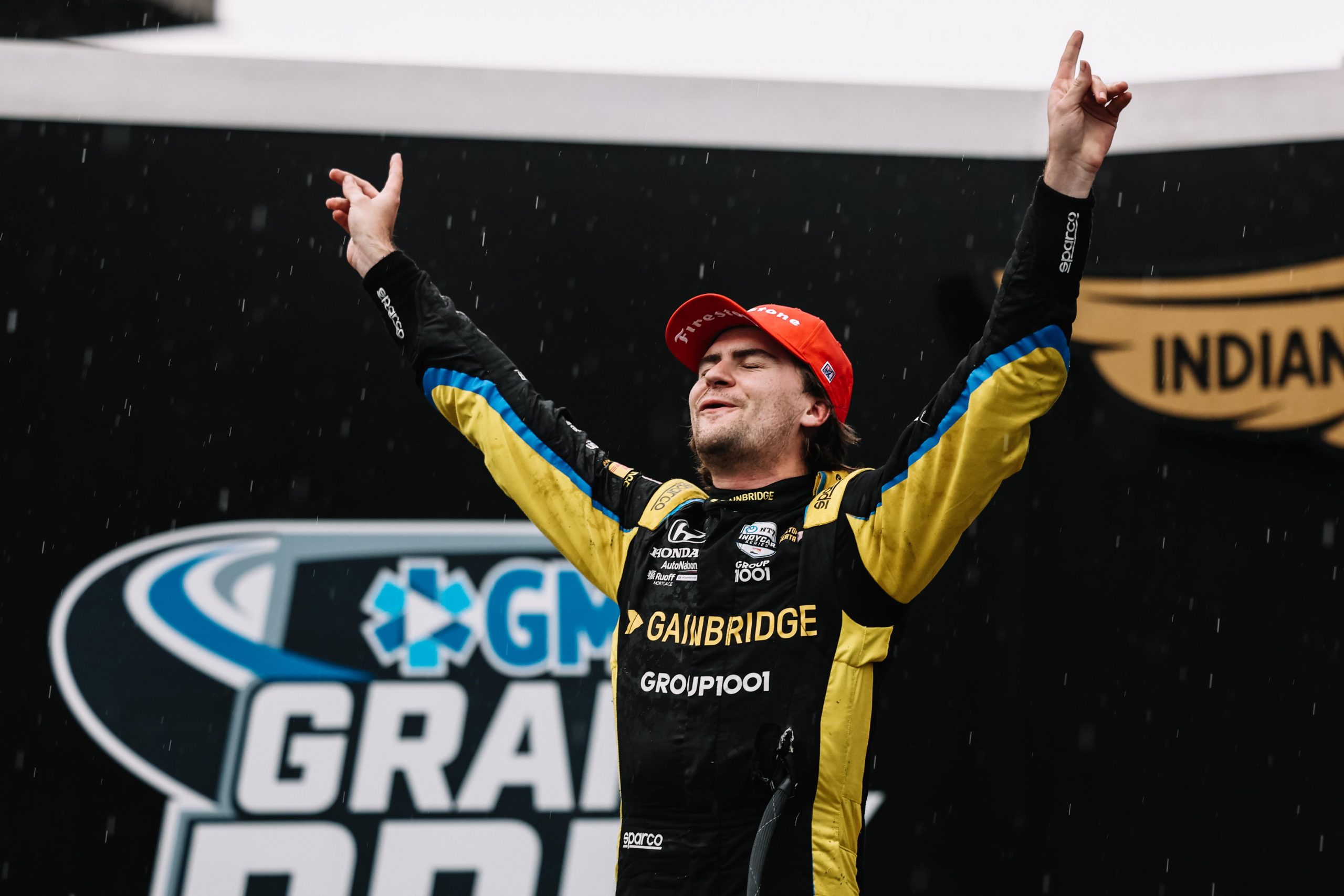 Colton Herta is on the verge of securing a seat on the 2023 Formula 1 grid with AlphaTauri, but the young IndyCar star will need an exemption from the FIA‘s super licence rules, which has polarised the paddock.

Depending on where he finishes in this year’s IndyCar championship, which concludes this Sunday at Laguna Seca, Herta will have up to 32 points on his super licence which is eight short of the 40 needed to earn the right to drive in F1.

Red Bull‘s Helmut Marko has stated he held talks with the FIA over the Dutch Grand Prix weekend and expects a decision to be made at Monza this weekend.

The big question everyone will be asking is, has Herta done enough to be given a super licence even though he hasn’t scored 40 points and is he good enough for F1?

Is Colton Herta a good driver?

You might be thinking why is there so much hype surrounding a driver who didn’t win a single-seater junior series when he was racing in Europe and is currently eighth in the IndyCar standings.

But, in the 2016 Euroformula Open Championship and Spanish Formula 3 Championship, he finished third and second in the standings.

For comparison, his team-mates where outside of the top 10 so he took a weaker car and team to the front of the grid, winning races along the way.

It was the same story when he made his full-time move to America in Indy Lights, which is IndyCar‘s feeder series where he again finished in the top three in 2017 and 2018. His ability to turn up in a new series and be fast didn’t go unnoticed.

Herta made his mark in 2019 when in just his third ever IndyCar race, he won with Harding Steinbrenner Racing at the Circuit of the Americas.

This was an IndyCar team that had major funding issues and needed Andretti to save them after the 2019 season, yet Herta won two races for them in his rookie season, plus three pole positions.

In 2020, Herta finished third in the IndyCar championship with the backing of Andretti, before kicking on again with three victories in 2021 on his way to firth in the standings.

Again, you might be thinking – why isn’t he winning the championship or more races?

The fact is, Chip Ganassi and Penske are the two top teams in IndyCar which fills six spaces.

Plus, if you ignore the ovals, which you maybe should when thinking about Herta and how he would fare in F1, the Andretti driver would have finished second in 2020 instead of fifth, and fourth instead of third in 2021.

For the super licence, this means Herta would have 30 points from 2020 and 10 from 2021 which would be enough for a super licence from those two years alone.

There is an argument that Formula 2 prepares drivers more than any other racing series for F1. However, IndyCar does too.

Both are fast single-seater racing cars in highly competitive series. Of course, the cars will handle differently and the style of racing is slightly different too.

In F2 there is more tyre saving due to the nature of the Pirelli rubber and it has DRS whereas IndyCar has push to pass.

F2 also races on F1 tracks and gives the drivers the chance to experience the environment of a Grand Prix weekend.

None of these factors are things anyone, including Herta, can’t learn though in F1 and if he’s talented and wanted by an F1 team they should have the right to sign him up with no hassle.

Another major difference is the best F2 drivers will move onto F1 or Formula E, so the front-runners change on an annual basis.

In IndyCar, the best drivers remain so the likes of Scott Dixon, Josef Newgarden and Will Power will always be in the mix and have been for over a decade. This arguably makes it a tougher series than F2.

His maiden win came at the Circuit of the Americas in 2019 with his second at that year’s finale at Luguna Seca. His pole position at Road America also made him the youngest ever pole-sitter in Indycar history at 19 years old.

He took just one win in a shortened 2020, due to the coronavirus pandemic, with a dominant display at Mid-Ohio.

A similarly impressive performance on the streets of St Petersburg in 2021 was followed by back-to-back wins at Laguna Seca and Long Beach at the end of the year.

It wasn’t all great though as mistakes and crashes have also plagued Herta‘s career. When chasing down Marcus Ericsson in Nashville 2021, he hit the wall.

He did the same thing during an intense strategic fight against Newgarden and Alex Palou at Long Beach 2022, braking too late and hitting the wall to end his day early.

There have also been moments of brilliance too, such as his latest win at Indianapolis when two heroic laps out of the pit lane with dry tyres on a wet track saw him take a spectacular victory.

Herta was see-sawing at the wheel, lighting up his rear tyres as he used every ounce of driver skill to not spin and have enough momentum through the corners.

It was exemplary driving and he showed off his talent with one of the best saves you will ever see in motorsport when he lost control of his car at Turn 12, only to gather it all up, and take the lead just seconds later.

In 2021, Herta was in talks to join Alfa Romeo-Sauber for the 2022 season with Andretti attempting to purchase the F1 team.

He did a test on Alfa Romeo‘s simulator in Switzerland and according to 1978 F1 world champion Mario Andretti, Herta was faster than Kimi Raikkonen and Antonio Giovinazzi who were the team’s drivers.

There were plans for a secret test at Ferrari‘s Fiorano circuit, plus free practice outings at the United States, Mexican and Sao Paulo GP.

But, none of it happened as Andretti failed to take over Sauber with Zhou Guanyu instead getting the seat to become China’s first ever F1 driver.

Herta says a move to F1 was a lot closer than people think.

“It was a crazy ride, the craziest year of my life,” Herta said.

“I was definitely telling myself I’d be back [in IndyCar] but I just didn’t really know when. I didn’t want to race in F1 the rest of my life and retire. I wanted to come back and be able to run the Indy 500 more times and run the full season.

“But I believed I was going [to F1], and I thought it was almost for sure . Although there was a small part of me that was still, like, ‘Well, I don’t have a contract yet, so it can still come undone.’

“It was just so surreal, I thought we did it for a second, and then it all came crashing down.”

Herta tested an F1 car for the first time with McLaren in July 2022 at Portimao, where the Portuguese GP used to be held.

The 22-year-old, who is McLaren‘s development driver, drove the 2021 machine and team principal Andreas Seidl says it was impressive.

“I think he did a very good test,” Seidl told the press during the Dutch GP weekend. “At the same time, it was only, let’s say, the initial test with us.

“It was also very important, and we were clear with Colton to take his time also in order to build it up. But yeah, it was quite impressive.

“[I am] absolutely open for some flexibility there and handing a guy like Colton the super licence, because in the end, with what he has shown so far in his racing career, I have no doubt that he is absolutely able to compete in Formula 1.”