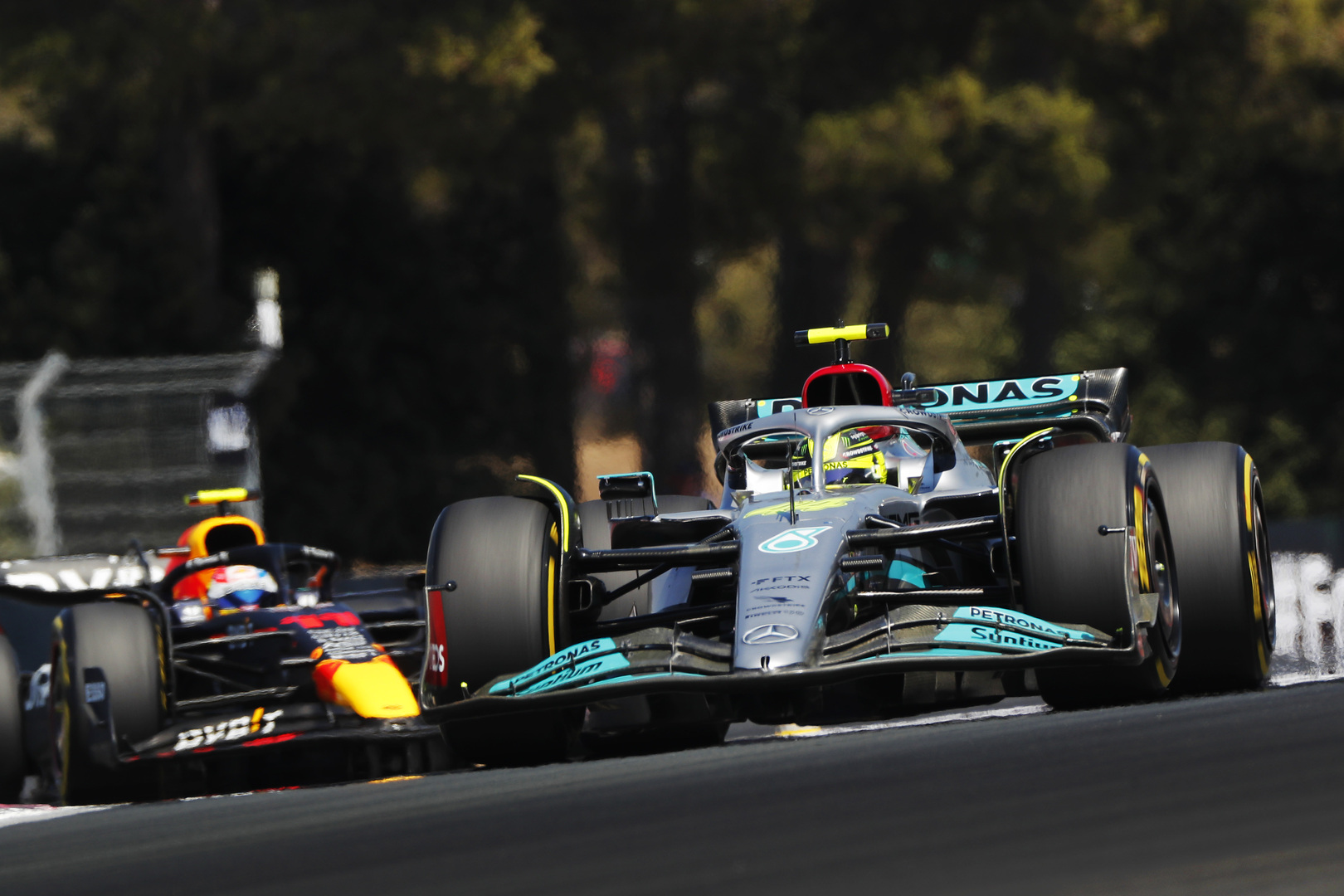 Many Formula 1 experts were billing the 2022 French Grand Prix as Mercedes‘ best chance to challenge Red Bull and Ferrari. They were partly right as Lewis Hamilton and George Russell gave the Silver Arrows their first double podium of the 2022 season.

Hamilton‘s second place finish was his fourth podium in a row, whilst Russell continued his streak of being in the top five in each race he’s seen the chequered flag with his third place.

Paul Ricard was touted as Mercedes‘ best track yet, but don’t be surprised if there is more to come this weekend at the Hungaroring.

Mercedes‘ biggest weakness is their straight line speed as they were, on average, 10km/h down on Red Bull, who set the benchmark, throughout the French GP.

A combination of less grunt from the engine, a less efficient energy recovery system and drag means an area where Mercedes used to dominate and blitz the field, is now holding them back.

But, the Hungaroring is one of the least power sensitive circuits on the 2022 F1 calendar and it’s all about the corners.

Silverstone saw Hamilton come alive and he had a genuine chance of winning on pure pace if the late-race safety car didn’t appear. Prior to that, he was catching the Ferrari pair of Carlos Sainz and Charles Leclerc.

The change of direction of the W13 was pivotal for Mercedes‘ pace and the middle sector at the Hungaroring is all about exactly that.

It seems Hamilton and Russell can roll the car into the corners nicely and have the confidence to flick it the other way.

There is plenty of downforce on the car in the middle and high speed turns too, a trait which should also serve them well this weekend.

As ever, tyres is crucial in F1 too which team principal Toto Wolff says Mercedes didn’t optimise at Paul Ricard.

“In qualifying we struggle to bring the tyres into the optimum window and don’t manage to extract the most from the first flying lap,” said Wolff.

“Then in the race, we lose three seconds at the start of the race, but once we stabilise, we are actually not so bad.

“We still have a lot of work to do, but I believe we have the best people to do so. All in all, it was a great team effort at track and back at the factories and we’re heading in the right direction.”

Mercedes will no doubt crunch the numbers to understand why they couldn’t bring the tyres into the right window and the warm temperatures in Budapest will give them another chance to get on top of these issues.

As much as the cars changed for 2022, the bigger 18-inch Pirelli rubber is also a factor which shouldn’t be underestimated when it comes to finding a tenth or two.

When you’ve at 24 different F1 tracks, it’s difficult to say whether there are some venues you are stronger at.

But, Hamilton’s record at the Hungarian GP is equally as strong as his achievements at the British GP, and we all know how impressive that is.

He’s won eight times at the Hungaroring and perhaps most importantly, two of those years were 2009 and 2013 when he generally struggled for a decent chunk of the season.

Hamilton often says he has a bad memory when questioned by the press about previous F1 seasons, but he had a lot to say when asked about the similarities between 2009 and this year.

“I remember the struggles of that year, qualifying 15th or whatever it was in the first race and then just continuously chipping away and I remember getting a big upgrade at Nurburgring,” said Hamilton.

“They only had one kit and because I was ahead on points, I think it was, I got the upgrade and I remember going through Turn 6 and 7, it was the first time we could take it flat.

“I remember I accidentally had the radio on and I made this ‘whoo-hoo’ kind of noise and they played it back to the guys back in the factory and then we got our first win in Budapest.

“This year, at the start a season, very, very similar when we were in February sitting down in the room, it looks like a glorious [car] and we’d got a lot of performance on the car, a lot of confidence, the car’s going to be good and then you get in the thing and it was bouncing.

“It’s taken us a long time to fix that, taken a lot of performance off that car to enable it to stop bouncing.

“But I would say this experience, it’s impressive to see a group of people just continuously not giving up, what you see within these teams.

“I think we haven’t made that big step that we made in 2009 to enable us perhaps to win in Budapest but who knows. We’re not giving up, we’re staying pedal to the metal.”

History tends to repeat itself in sport, something Hamilton knows all to well having seen it all during his 15 years in F1.

Current weather forecasts say there is a high chance of thunderstorms on Saturday with the potential for rain on Sunday too.

Of course, Max Verstappen in the Red Bull will be incredibly tough to beat if it’s wet as he proved at the Canadian GP in qualifying by topping every session. However, Hamilton and Russell can be pretty spectacular too in the rain.

It will likely need Verstappen to make a mistake to give Mercedes a chance, but look at last year’s Hungarian GP when carnage at Turn 1 paved the way for Esteban Ocon to win his maiden F1 race.

On paper, the Hungaroring should create boring races due to its lack of straights. However, it has a knack of throwing up plenty of drama that can provide opportunities.

If there’s one thing Mercedes have done right in 2022, they have taken their chances. That’s why Russell has finished in top five in every race he’s seen the chequered flag, and why Hamilton has stood on the podium at the last four Grand Prix.

Without doubt, if Mercedes keep maximising their races, they will win a race this season and it might even come this Sunday.