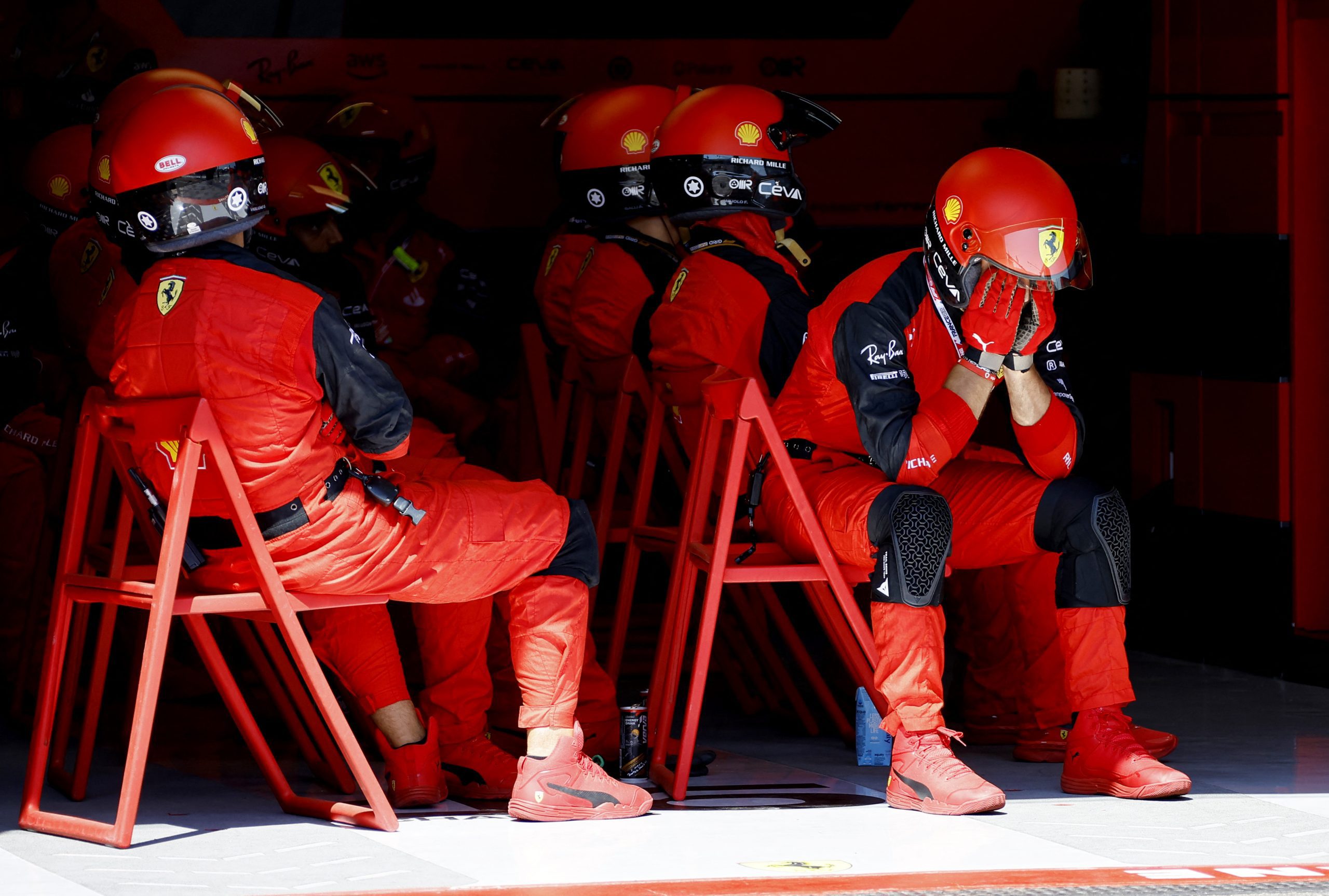 How many times have you read about Ferrari making a mistake this year? Too many times. But the 2022 French Grand Prix on Sunday saw the Scuderia hit a new low because it was painful to see Charles Leclerc throw away a win and the most confusing strategy decisions with Carlos Sainz. It was almost laughable.

Max Verstappen took full advantage as he has already done on a couple of occasions this season and now has a 63-point lead over Leclerc.

Mercedes also picked up the spoils with their first double podium of 2022 with Lewis Hamilton taking a brilliant second and George Russell catching Sergio Perez off guard to steal third.

Ferrari have experienced this run of errors with Sebastian Vettel in 2017 and 2018. It was gut-wrenching then and it’s exactly the same now, except you would have thought the team learned from those two years.

Leclerc has been driving exceptionally but two pivotal mistakes have cost him a big chunk of points. Imola when running in third, and Sunday at Paul Ricard as his good tyre wear was about to pay dividence.

Up until then, Leclerc has brilliantly held off a charging Verstappen. He didn’t move to the inside unnecessarily at the chicane, which would have compromised his exit and given Verstappen a great chance to overtake going into Signe, and hit his marks under huge pressure.

He was driving like a champion, but champions don’t make silly mistakes when involved in an intense title right, apart from Mika Hakkinen in 1999 at the Italian Grand Prix of course.

It shows the phenomenal level Verstappen and Hamilton performed at throughout 2021 as they didn’t make any of these overdriving mistakes.

That’s the level Leclerc needs to get to and it’s not exactly something you can practice because being in that situation, when you have to push hard around a pit stop phase, knowing that every hundredth can make a difference, is one of the toughest parts of being a racing driver.

“I am performing at the highest level of my career but if I keep the mistakes then it is pointless,” Leclerc told Sky Sports F1. “If we lose the championship by 32 points I will know where they are coming from but it is unacceptable.

“I go through the same process all the time and try to analyse. It is a mistake and that is it. It is trying to push too much and I lost the rear. It has been a very difficult weekend for me, I struggled with the balance of the car. I did a mistake at the wrong moment.”

Christian Horner revealed Verstappen was always going to go to the end on a one-stop so we were robbed of Leclerc trying to attack back on fresher rubber as he had been jumped by the Red Bull driver.

There’s nothing like a flat out, race-long duel between two top drivers and Leclerc‘s mistake meant we’ll never know which driver had the canniness to beat the other in a proper on-track fight.

What were Ferrari thinking with Sainz?

Unfortunately the Ferrari madness doesn’t end there. Carlos Sainz started at the back of the grid after changing his entire power unit and was carving his way through the field.

Ironically, Leclerc‘s crash caused a safety car at a bad moment for Sainz because he was on the hard tyres and had to pit for the mediums on Lap 18, much earlier than he would have wanted.

For some reason, the front jack man hesitated to release Sainz so he was let go into the path of Alex Albon and received a five-second penalty for the incident.

Nevertheless, Sainz has supreme pace and soon found himself on the back of the Mercedes and Red Bulls.

He overtook Russell with a lovely move that was set up at the chicane to force the Briton to defend and compromise his exit to get a better run to the flat-out Signe where he went around the outside.

It looked like Sainz wasn’t going to overtake Perez which gave Ferrari two options. Pit with 15-20 laps to go for fresh rubber to get the most performance from the tyres, or risk staying out in the hope of something special from Sainz. They chose neither.

Sainz got by Perez after a fantastic scrap whilst his engineer was speaking to him in the team radio to pit.

Wisely, Sainz ignored the call but then pitted a lap later anyway which didn’t make any sense. The Spaniard said after the race that the data suggested he wouldn’t make it to the end, which begs the question. Why didn’t he pit earlier instead of losing time behind and battling Perez?

It’s simply poor decisions from Ferrari and something that seems to be part of the DNA of the team. They have made so many big mistakes with strategy and it’s infuriating to see.

If it’s not the car, it’s strategy. If it’s not strategy, it’s the driver. Leclerc should be leading this world championship, not 63 points behind.

Verstappen and Red Bull not faltering

The Verstappen and Red Bull combination have been the complete opposite of Ferrari in 2022. They are maximising their chances and have beaten Ferrari every time the Italian manufacturer crumble.

Once again, we saw a mature, calm Verstappen who was ready to be patient in the opening 16 laps rather than rushing into a lunge or a risky overtake.

Verstappen isn’t taking anything for granted and will be so difficult to overhaul, even if he has the second fastest car for the majority of the second half of the season.

He’s prepared to finish second or third if the victory is not possible and is judging the risk versus reward game perfectly. That’s the only difference between him and Leclerc.

Red Bull‘s strategy team so often get things spot on too. It just goes to show, working as a team and executing a plan is just as valuable as having a fast car in F1.

“Even with them [Ferrari] sliding around a bit, they were still very quick in front of us,” Verstappen told the press.

“It just shows that they have a very quick car. From our side we know that we have to find, especially over one lap, quite a bit of performance. But you know, we’ll be working on it.

“It’s very important to always score points, even on a bad day, which we did in Austria. But of course the lead we have is great, but it’s probably a bit bigger than what it should have been when you look at the car performances between the two cars.”

Mercedes had their best result of the season yet, so they should be happy right? Well, not quite because they had high hopes of being in contention for the win if everything came together.

Toto Wolff admitted the car is still lacking at least six tenths of a second to Red Bull and Ferrari despite Lewis Hamilton‘s best efforts on his 300th Grand Prix start.

Hamilton may have missed FP1 due to Nick de Vries getting some seat time, as per the mandatory test and reserve driver practice rules this year, but it didn’t matter and he outperformed George Russell in every session.

Russell had a good race too, although his claims that Perez should have given him a place back are questionable. If anything, Russell forced Perez off the track and gave him nowhere to go.

Perez himself was well off the pace compared to Verstappen and will be disappointed to get caught out by the virtual safety car ending.

For some reason, the VSC ending was much longer than normal and the games between Russell and Perez to be hard on the throttle when green flag racing resumed was fascinating.

“I think emotions were high for all of us,” Russell explained to the press when discussing his animated team radio. “I felt like I did a mega-move on Checo and ultimately didn’t get to keep the position.

“We definitely had a bit more pace there. I quite enjoyed hearing Toto on the radio, but ultimately, from my side, you’re going absolutely flat out but we’re in this together, as a team.

“When you’re sat in the car, sometimes you do feel a bit alone, because we’re in the car, we’re doing everything we can, and you don’t know what the engineers are looking at.

“The engineers don’t totally feel what we’re feeling within the car and sometimes having these exchanges brings it a little bit closer together.”

One suspects Mercedes and Red Bull will be fighting again this weekend at the Hungaroring.

Points on home soil for Alpine

We didn’t see much of the midfield because of all the action amongst the podium runners, but Alpine recovered from a difficult Friday to score sixth and eighth with Fernando Alonso and Esteban Ocon.

Alonso had a rocketship start to overtake Russell and Lando Norris, before settling in for a comfortable drive to score his second best result of the season so far.

“I am pleased with our race today,” said Alonso. “It was well-executed from our side and we managed the pace and tyres well.

“We had to work through a lot of things in terms of the car balance this weekend, but we ended up finishing just behind the top five positions, so a very solid race in the end and more points on the board for us.

“I had a good start climbing up to fifth, but then we dropped to sixth and perhaps resumed our normal position in the race. It shows that when we have a clean weekend like this one, then we can finish in the top six positions.

“Hopefully we can keep-up this level of consistency throughout the second half of the season and continue our momentum.”

Ocon made a clumsy mistake when he turned around Yuki Tsunoda in Lap 1, forcing the AlphaTauri driver to retire.

He was given a five-second time penalty but had enough pace to get by Daniel Ricciardo, which was important for the constructors’ championship, and couldn’t quite catch Norris, who had a chunk of debris stuck in his car during the latter stages of the race.

It’s all but confirmed that F1 will not have a French GP when the 2023 calendar is announced.

Many fans won’t miss Paul Ricard due to the nature of the track and there aren’t any other realistic circuits in France which spectators would love to see on the calendar.

Paul Ricard would make a great test track for F1 because it’s likely to be dry and really tests the aerodynamics of the car.

Don’t forget there are two home drivers on the current grid, the presence of Alpine and the sport’s governing body, the FIA, are all French.

When will the next French GP be? We’re talking years away, if not a decade or two. Let’s hope Ferrari have solved their operational problems by then.