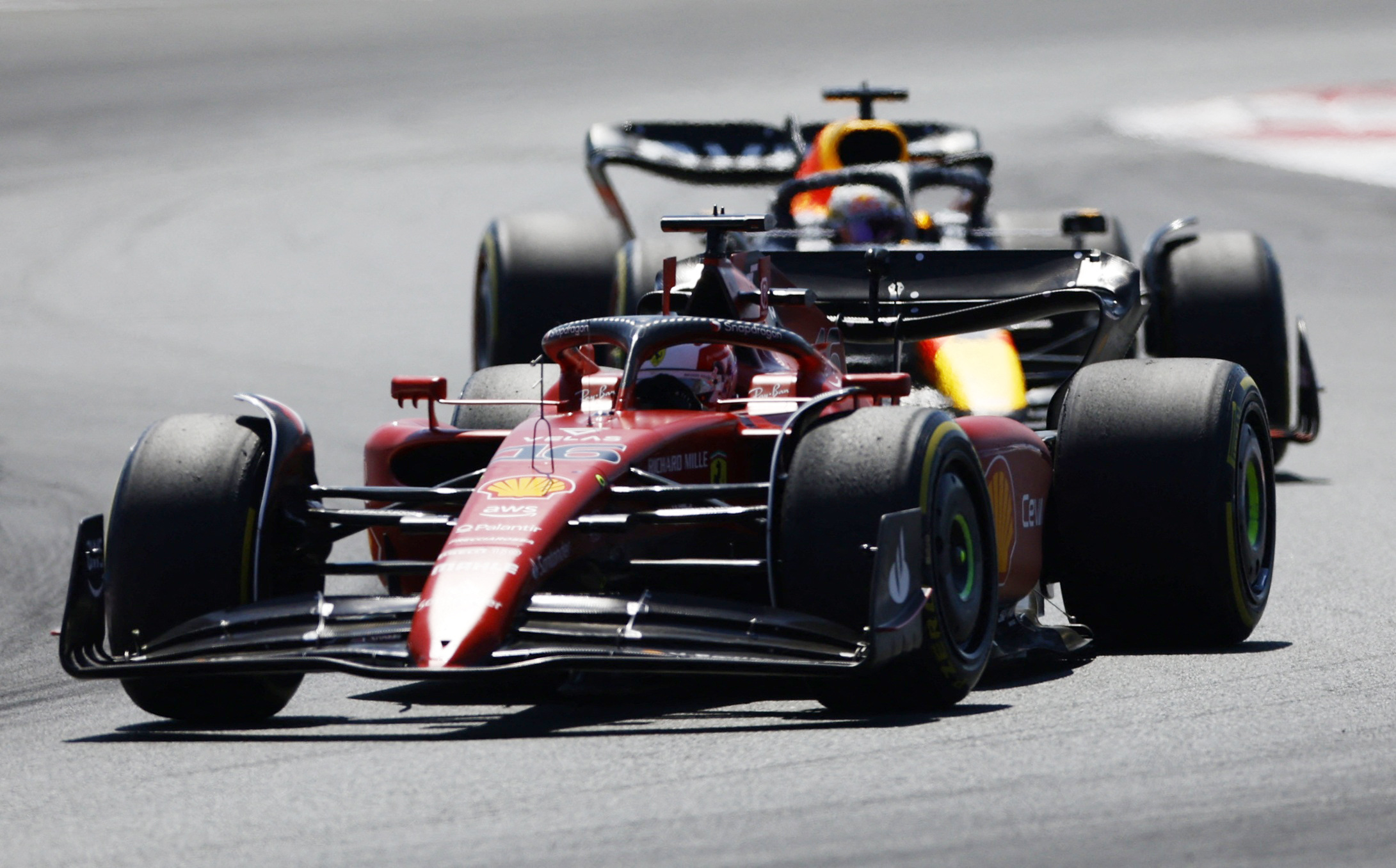 It’s difficult to say whether Ferrari will be happy that there is another Formula 1 event this weekend after a huge punch to the stomach last Sunday, which may have even felt like a knockout blow.

On one hand, they can hit back at the 2022 Hungarian Grand Prix, or they haven’t had enough time to learn and understand what went wrong.

The best sportspeople jump straight back onto their horse, as that familiar British phrase goes, and Ferrari desperately need something to prance about going into the summer break.

Charles Leclerc is 63 points behind Max Verstappen following his mistake at the French GP when he dramatically crashed out of the lead.

He won’t be able to afford any more errors like that if he wants to give Verstappen a real run for his money when we’re talking about the championship in October, and hopefully November.

Hungarian GP history isn’t kind to the Scuderia with just two victories from the last 17 editions of the event. However, the past doesn’t matter when it comes to Ferrari’s 2022 car which has been brilliant recently.

The upgrades to the floor of the F1-75 at Paul Ricard was a big step forward for Ferrari, something Red Bull advisor Helmut Marko says he was concerned about.

In some corners, Ferrari were up to 10km/h faster than Red Bull. Yes, they were running different setups and have alternate car philosophies, it suggests Ferrari will have the car to beat at the Hungaroring which is all about corner speed.

F1 is a highly complex sport, more so than you probably think, but the simple matter of the fact is, Ferrari currently have more downforce than Red Bull and is aerodynamically suited to gain chunks of time in the twisty stuff.

Team principal Mattia Binotto tried to remain as positive as possible after the French GP and the aim is to win the remaining 10 races, starting with Budapest.

“We must look at what we can achieve, not at the points lost,” Binotto told reporters. “Charles is a champion, no one in the team will put that in doubt, we trust him. There are still 10 races, let’s try to win them.”

“In terms of tyre degradation, we were better than Red Bull, with Max having problems after 15 laps. The car is very strong, and Carlos showed it. Let’s turn page, discussing a mistake from a champion like him, it doesn’t make sense.

“We trust him, Charles is already there with the engineers, we checked the data of his race pace and Charles was smiling. So, that’s the strength of a champion who knows how to turn page.”

Leclerc has made just two small, but gut-renching l mistakes this year and it would be shocking if he repeated a costly error just seven days on from France.

Neither driver will be taking a grid penalty for excessive use of power unit elements, that pain will be felt later in the season, so, on paper, Ferrari can lock out the front row and should have a double podium which includes a win.

Red Bull may have to play second fiddle

We’re finally getting to really see the strengths and weaknesses of Ferrari and Red Bull and the latter appear to have fallen behind in the ongoing development race.

Not by much though as you only have to look at how Verstappen was pushing Leclerc super hard in their engrossing 15-lap fight before the pit stop phase at Paul Ricard.

However, the impressive straight line speed of the Red Bull was what allowed Verstappen to stay in the fight because he was clearly losing time in most corners.

Even if Red Bull run a big rear wing this weekend, it feels like the Ferrari is a bit more nimble and sticks to the ground in the medium and high speed turns, allowing Leclerc and Sainz to throw their car into the corner.

“I personally think it’s going to be a little bit harder for us,” Verstappen told the press. “Just purely one-lap performance, especially.

“I don’t expect it to be terrible but I do think that Ferrari is going to be super strong here, like, of course, they have been the whole year.

“But I do think that this is a track where they might be, let’s say, very strong. But we’ll see. Also, the weather: I don’t know what’s going to happen, how much rain is falling. But all these things can come into play and can do many things to the result.”

Sergio Perez needs to find some pace after admitting he wasn’t fully comfortable with the car in France.

Perez was a long way off Verstappen in race trim and will be found out once again if he hasn’t found a solution for his lack of performance. The Mexican may even be behind the Mercedes drivers.

Mercedes could be on par with Red Bull

Mercedes are getting closer and closer to fighting for the win and you shouldn’t be surprised if they are on the coattails of the leaders this weekend.

Similarly to Ferrari, the Mercedes is excellent in the corners and it’s the change of direction which saw Lewis Hamilton shine at Silverstone in the race.

The Hungaroring is one of Hamilton‘s best tracks, having won there eight times, including in two of his trickier F1 campaigns in 2009 and 2013.

Like many F1 drivers, George Russell played things down and believes Mercedes still have a step to make.

“We’re definitely closing that gap, there’s no doubt, but the four cars ahead of us certainly have the pace advantage,” said Russell.

“But I think, as a team, we’re slowly closing the gap. Hopefully after the summer break, we’ll add some extra things to the car, but as does everybody, so it’s not going to be straightforward.

“We still believe we can probably fight for victories at some point this season. But I don’t think we’ll probably ever have the car that will be outright quickest.”

Haas have a huge upgrade coming

The team that has developed the least so far in F1 2022 is Haas. Somehow, they’ve just about kept up with their midfield rivals but a big upgrade had to come soon, and it’s finally happening.

Early reports are the car will visibly look very different, just like when Aston Martin turned up to the Spanish GP with a b-spec machine.

“I hope for a lot more performance,” said Kevin Magnussen. “But with these upgrades sometimes it takes a bit of time to really understand the characteristics and the differences in the car, until you really unlock the full potential.

“We’ve seen with the car that we’ve been running all year, we’ve just been continuously finding more performance. And, you know, I think also the other side of that is that the teams that have brought upgrades didn’t seem to find all that much.

“I think it’s always exciting to see new parts on the car and it looks different and you’re always hoping there’s going to be a lot of performance, but I’m not expecting the big picture to change too much. So we’ll see.”

Mick Schumacher wasn’t quite able to continue his good form last time out in France, but is confident of getting back into the points this weekend.

“I expect us to be actually pretty strong here,” said Schumacher. “We were strong last year to an extent, and I feel comfortable going there, it’s always nice and warm, and I think it will be pretty good for our car.”

“[The Hungaroring is] pretty short, there’s a lot of laps and a lot of corners so there’s little opportunity to rest, which means concentration levels have to be pretty high.

“I always enjoy going there, I enjoyed it throughout F2 and F3, so I’m looking forward to going back and hopefully getting a strong result this year.”

Rain could cause havoc in Hungary

When it rains in Budapest, it absolutely chucks it down so there could be torrential weather during qualifying with a high chance of thunderstorms.

Rain could hit the circuit on Sunday too which will create even more opportunities on a track which tends to dry quickly, so switching to the right tyres at the perfect time isn’t easy.

Even if it doesn’t rain on race day, the drivers are weary that it’s generally difficult to overtake so the first few corners can get frenetic.

The best time to make ground is on Lap 1 because then you have track position which is king in Hungary, unless you have a big and pace advantage.

Two 180 degree corners to start the lap mean there is a good chance of a collision or two, so Red Bull and Ferrari could get very close on the opening lap if their drivers are in a mood to fight hard.

They should both be aware that Mercedes will be right there, and could even cause them trouble on merit.