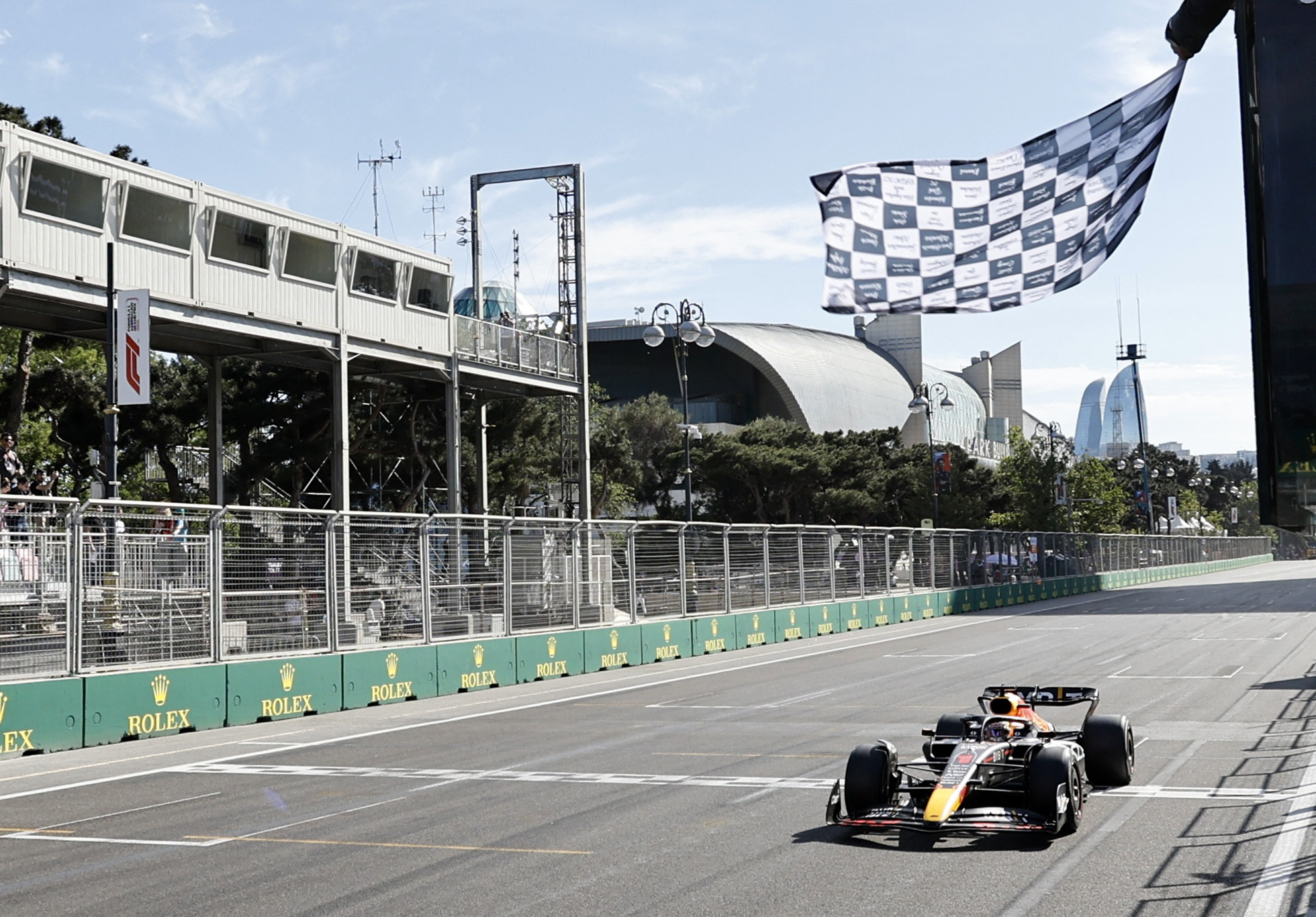 It’s been the story of the last three Formula 1 events – Ferrari capitulating when out in front and Red Bull right there to pick up the pieces, showing their rivals how it should be done.

Max Verstappen proved why Sergio Perez will find it difficult to mount a serious title challenge by dominating the 2022 Azerbaijan Grand Prix once Charles Leclerc‘s hopes of a win blew up in smoke, quite literally.

Another Red Bull 1-2, as we saw in Imola and Barcelona, except this time Verstappen and Perez are now also at the top of the F1 driver standings, adding more salt to Ferrari‘s growing wounds.

Leclerc must be seething

Once again, Leclerc took a brilliant pole position by lighting up the sectors and driving up against the Baku walls with great precision and aggression.

However, Leclerc failed to convert pole position into victory for the fourth race in a row, something that hasn’t happened since Juan Pablo Montoya in 2002.

A slow getaway from Leclerc saw him lose the lead to Perez, but he was still in it and Ferrari made a bold call by pitting the Monegasque driver under the first virtual safety car.

Ferrari probably made the right decision here by going on the offensive as Leclerc was in a tricky position in between the Red Bulls.

In a split second, Leclerc‘s chances of victory evaporated as a power unit failure put him out of the race and, just like the events that unfolded at the Spanish GP, the retirement was made even crueller because he was in the lead.

Whether he would have won is anyone’s guess, but we were robbed of a big fight for the lead and it must be gut-wrenching for Leclerc to be driving so well, yet is being let down by the fragility of the car.

It wasn’t the only Ferrari issue on Sunday afternoon. Carlos Sainz was already out of the Azerbaijan GP due to a hydraulics failure when he was in the hunt for a podium.

That was the third time Sainz has retired from the race this season, a stat only matched by Alfa Romeo‘s Zhou Guanyu.

“It’s a shame because I had taken care of my tyres and I was about to start pushing,” Sainz told Sky Sports. “As soon as I did that this happened – the hydraulics went.

“So far, the season is not going my way. I don’t know if my car has had this problem before – I don’t think so.

“We know we need to improve, we have been pretty good with reliability from my side, but we have just been incredibly unlucky with one thing or another.

“From my point of view, I can’t seem to do two consecutive races without something happening. It’s a shame but we are a team and we are going to stay united because I am sure better days will come.”

Kevin Magnussen‘s race also ended in smoke when the Ferrari engine in his Haas gave way, whilst Zhou was forced to limp back to the pit lane due to an issue, which was very frustrating because he was having a great race.

For all of Perez‘s confidence and happiness with the 2022 car, Verstappen is still the driver to beat and nine times out of 10, he comes out on top in the battle at Red Bull.

As Christian Horner stated, it was a “very mature” performance from Verstappen to save his tyres when tucked in behind Leclerc and not get too frustrated.

His tyre management was better than anyone out there and he blew Perez away in the middle of the Grand Prix to comfortably win for the 25th time in F1, and became the driver with the most podiums at Red Bull.

“You can never make up for what we lost last year, but today we had incredible pace in the car and we could look after the tyres and chip away at it,” said Verstappen.

“We were a tiny bit lucky because of the [Leclerc] retirement but nevertheless our car was really quick today, so I could have closed that gap, then you have a race on your hands.

“Overall, really happy with how the balance of the car was today. That’s what you need around here so you can look after your tyres. To have a 1-2 as a team as well, it was a really good day for us.”

Verstappen is just relentless, as he made it six different winners from six races in Baku. He now leads Perez by 21 points, and, perhaps more importantly, Leclerc by 34 points.

Mercedes, porpoising and the Baku City Circuit is a horrible combination, you only have to look at the state of Lewis Hamilton when clambering out of his car after the race.

It didn’t stop George Russell from showcasing his talent yet again with a tremendous performance on Saturday and Sunday.

Russell earned a quiet race day by beating Hamilton by two tenths of a second in qualifying, he’s now 5-3 up in the qualifying head-to-head battle against his seven-time world champion teammate.

“You’ve got to be there at the end to pick up the pieces, score the points,” Russell told the press.

“The car has been feeling OK to drive, the balance is good. The challenge is just the bottoming.

“I think it doesn’t matter what boat you’re in either, you’ve got the porpoising and you’re hitting the ground and if you don’t have porpoising, you’re running the car millimetres to the ground, and you’re bottoming out.

“I’m feeling it on the back at the moment. But, we’ve got to keep on working hard to find more performance and understand what we need to do to unlock that.

“I don’t think we’ll have any major updates or anything to try in Canada, but maybe for Silverstone, we’ll have a better idea.”

Hamilton needed to make a recovery drive after coming out in traffic following his pit stop under virtual safety car conditions.

In previous years, Hamilton has been able to breeze through the midfield but not this year as Mercedes‘ weak straight line speed was exposed.

In the slipstream of Esteban Ocon, who had a tiny rear wing on his Alpine, Hamilton was losing ground on the main straight which must have been a painful experience.

Eventually, Hamilton got back into position but he must be wondering if his incredible streak of winning a race in every season he’s competed in, since making his F1 debut in 2007, will come to an end this year.

“I just got through that race on adrenaline, biting down on my teeth through the pain,” said Hamilton.

“I can’t express the pain that you experience, especially on the straight here. And at the end, you’re just thinking of all the people relying on you for the points. But we’re in such a good position still!

“Third and fourth is a great result for the team. The team did a great job with the strategy and once we’ve fixed this bouncing we’re going to be right there in the race. We’re losing over a second for sure just with bouncing, or at least a second.”

Strong pace in practice, sixth place in qualifying and a top five underlined Pierre Gasly‘s best weekend of 2022 so far.

Gasly, along with Sebastian Vettel, gambled by pitting on lap nine behind the virtual safety car and running all the way to the end of the race on the hard tyres.

It gave him a chance to beat Hamilton which didn’t quite happen, but Gasly was delighted with the result.

“We knew at the start of the race that it would be relentless, as we headed in with just one new set of hards, so we were really hoping for a clean end to the race but unfortunately, we had the second virtual safety car,” said Gasly.

“We knew that wouldn’t play out in our favour. I tried to defend against Lewis the best I could, once he pitted for new tyres, but he was much faster – I tried to nurse my tyres through the race, but they really weren’t in great shape by that point.

“At the end of the day, to be in a position to fight with the Mercedes means that we’re doing a really good job, so it’s great for the team to come away with lots of points today.”