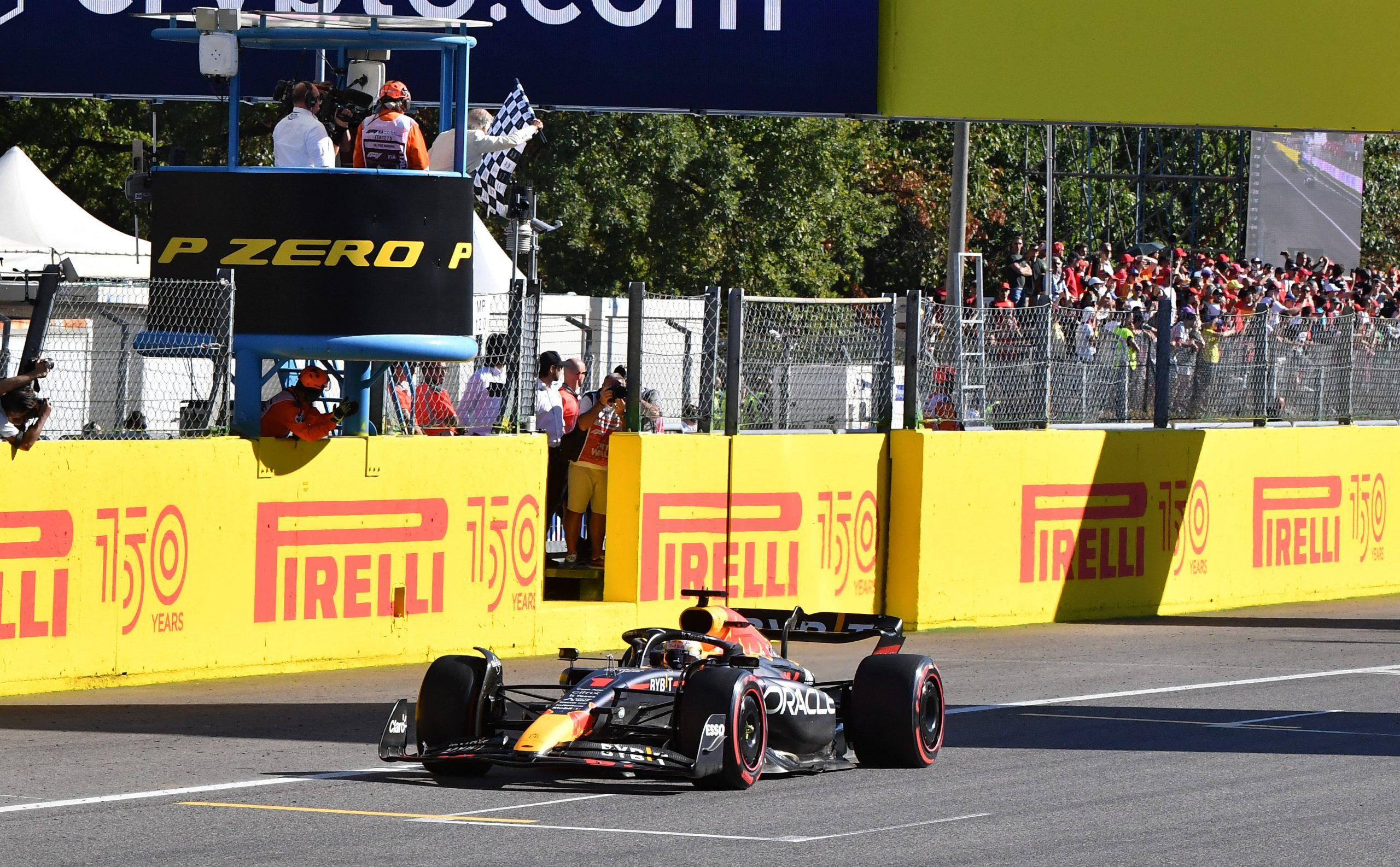 Max Verstappen dominated the Italian GP to take his fifth consecutive victory in the 2022 F1 season as the race finished under the safety car following a retirement by the McLaren of Daniel Ricciardo.

Verstappen was in a class of his own throughout the race, as he shrugged off a five-place grid penalty for going over the limit of new engine parts to surge into third by the second lap and eventually take the lead after polesitter Charles Leclerc pitted under an early virtual safety car.

That VSC, caused by the retirement of Aston Martin’s Sebastian Vettel on Lap 13, allowed Leclerc a cheap pitstop for medium tyres after starting the race on soft tyres, but Verstappen was able to maintain a comfortable gap at the front.

Leclerc eventually retook the lead of the race after the Red Bull pitted on Lap 25, but the Ferrari driver was not confident that those tyres would last until the end of the race, and gave up the lead once again to the Dutchman as he pitted on Lap 34 for soft tyres.

The Monegasque threw everything at Verstappen as he attempted to close down a 19 second gap to the leader, but despite a tyre offset he was unable to do much about the gap.

Ricciardo’s retirement in between the two Lesmo corners caused a full safety car at the end of the race and raised Tifosi hopes of a grandstand finish as the leaders all pitted for fresh soft tyres, but they were unable to clear the McLaren in time and the race finished under the safety car.

The Italian GP has delivered some fantastic races over the past few years, and there were hopes that the 2022 edition at Monza would put on another dramatic show with a mixed up grid after eight drivers took engine penalties.

However, that wouldn’t prove to be the case as Verstappen comfortably managed the race throughout, underscoring the dominance that the reigning champion and Red Bull have demonstrated throughout the season.

The legions of Tifosi in the grandstands were given plenty to cheer for with Carlos Sainz’s charge through the pack from 18th, the Spaniard cutting through the pack to eventually finish in 4th.

Meanwhile it was yet another consistent performance from George Russell and Mercedes, finishing on the podium once again in 3rd from 2nd on the grid, while Lewis Hamilton worked his way up to 4th after starting the race from 19th.

Sergio Perez, whose Red Bull had a scare in the early stages of the race after his front right brakes caught fire, came over the line in 6th, ahead of the other McLaren of Lando Norris and the AlphaTauri of Pierre Gasly.

While one Dutchman took a comfortable victory at the front, it was a sterling day for his countryman Nyck De Vries, who put in a strong performance throughout the race to score points on his race debut for Williams subbing in for the ill Alex Albon.

De Vries has impressed throughout his time in Formula E, and his performance at Monza will add to the calls for the other flying Dutchman to be given an opportunity to race in the top tier of motorsports.

Elsewhere on the grid Zhou Guanyu added another points finish to his performance at the start of the season at the Bahrain GP for Alfa Romeo, ahead of the Alpine of Esteban Ocon.

Ocon’s teammate Fernando Alonso had a less than ideal race, his Alpine retiring after an overheating issue, while Aston Martin suffered a double DNF after Lance Stroll was unable to continue on Lap 41 with a brake issue.