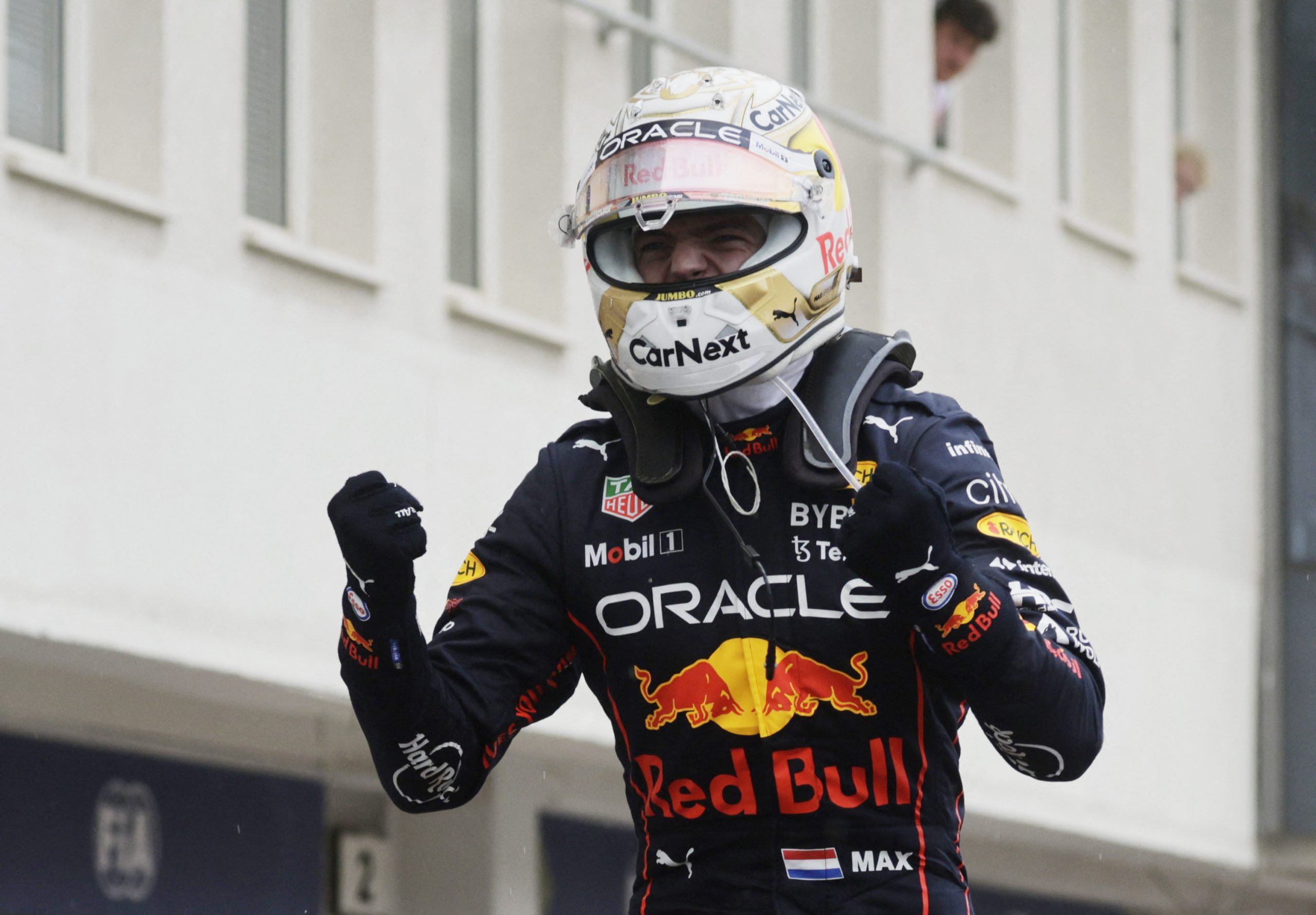 Max Verstappen made the most of another costly Ferrari strategy error to seal a dramatic 2022 Hungarian Grand Prix victory and extend his advantage at the top of the Driver Standings.

The lead changed hands multiple times during a topsy-turvy race at the Hungaroring but it was the Dutchman who crossed the line first, despite starting 10th and spinning on Lap 41, to take an 80-point lead into the summer break.

“I was hoping I could close to get close to the podium but conditions were very tricky and we had really good strategy,” a surprised Verstappen said after the race.

“We always pitted at the right time and had very good outlaps and even with a 360 we won the race.”

Behind, a charging Lewis Hamilton snatched second late on from George Russell, as Mercedes enjoyed a second consecutive double podium to close in on Ferrari in the Constructors’ Championship.

With rain threatening, Russell made a tremendous start from pole but was soon under pressure from the two Ferraris that are notoriously better at warming their tyres up.

He held them off for 30 laps but was powerless to keep Charles Leclerc behind after the first round of pit stops, with the Monegasque looking odds-on to take the chequered flag until a switch to the hard tyres backfired.

In the end, it was Carlos Sainz who led the Scuderia charge to finish fourth from Sergio Perez, with Leclerc having to settle for sixth on another day to forget for Ferrari.

Outside the top six, Lando Norris picked up the best of the rest crown for McLaren, ahead of the two Alpines and Sebastian Vettel, who took the final point on offer in his first race since announcing this would be his last season in F1.

After a season littered with driver errors and car unreliability, Ferrari were primed to make up ground in both championships at the Hungaroring. Instead, it’s a familiar feeling for the Scuderia as yet more strategy errors proved costly.

Starting second and third, Sainz and Leclerc held station off the line until the latter jumped his teammate after the first round of pit stops. Such was Leclerc’s pace, he made the overcut work before passing Russell for the lead around the outside into Turn 1 on Lap 31.

At that point, the 24-year-old looked like the man to beat but reacting to the early stop of Verstappen at the end of Lap 39, Ferrari’s gamble on hard tyres backfired massively, with the Monegasque having to cut his losses and switch to a three-stop strategy en route to a disappointing sixth-place finish.

It’s another bitter pill to swallow for Ferrari, who are now under threat from a much-improved Mercedes in the Constructors’ Championship, while the result leaves Leclerc trailing Verstappen by 80 points.

Asked for his thoughts on the strategy decisions, a perplexed Leclerc said: “I don’t know yet, we need to speak with the team and understand the thought behind pitting for the hard because I felt very strong on the medium, everything was under control.

“I said on the radio I was very comfortable on the medium and that I wanted to go as long as possible because the feeling was good but I don’t know why we took a different decision.”

Verstappen will rightly take most of the plaudits, but Hamilton was equally impressive to snatch second after starting seventh. Jumping the two Alpines off the line proved crucial before the seven-time world champion became embroiled in a battle for fourth with Norris.

He eventually prevailed, and after being undercut by Verstappen in the pits, a mega second stint on the mediums set the 37-year-old up for a late charge on the softs that could’ve conceivably yielded victory had the race been a few laps longer.

“I was definitely struggling at the beginning but bit by bit I got more comfortable with the balance,” Hamilton said. “I had a really good start so I want to acknowledge my team. We’ve had a tough year and for both cars to be on the podium is an amazing way to go into the break.

“The other guys have an edge but we are clearly closing the gap. Hopefully we can bring some more into the second half of the season and start fighting with them.

“I was hoping it was going to rain at the end so I could challenge Max but we ran out of laps. If the DRS had been okay yesterday we’d have been in [a fight] for the win. Two seconds in a row, I’m really happy.”

It might have been bittersweet for Mercedes, with Russell missing out on a maiden win after taking a surprise pole. The Brit defended bravely but ultimately lacked the ultimate pace to resist the Ferrari and Red Bull challenges.

A long last stint then left him a sitting duck to his teammate but it’s another brilliant result for the consistent 24-year-old, who has leapfrogged Sainz into fourth in the Driver Standings.

“When it started spitting at the beginning and we were on the soft tyres I thought we were on,” Russell said. “It was a good first stint and then towards the end on the mediums I really struggled and lost a bit of temperature.

“Again, an amazing job by the team in pole position yesterday, double podium, we are definitely making progress so really proud of the work everyone has done.

“I’m sure there’s a lot I will look over and I could have done better. We pitted quite early on both stints so you’re trying to eke the tyre out to the end, trying to push as hard as possible at the same time. A bit of a challenging position to be in but nevertheless pleased to come away with a podium.”