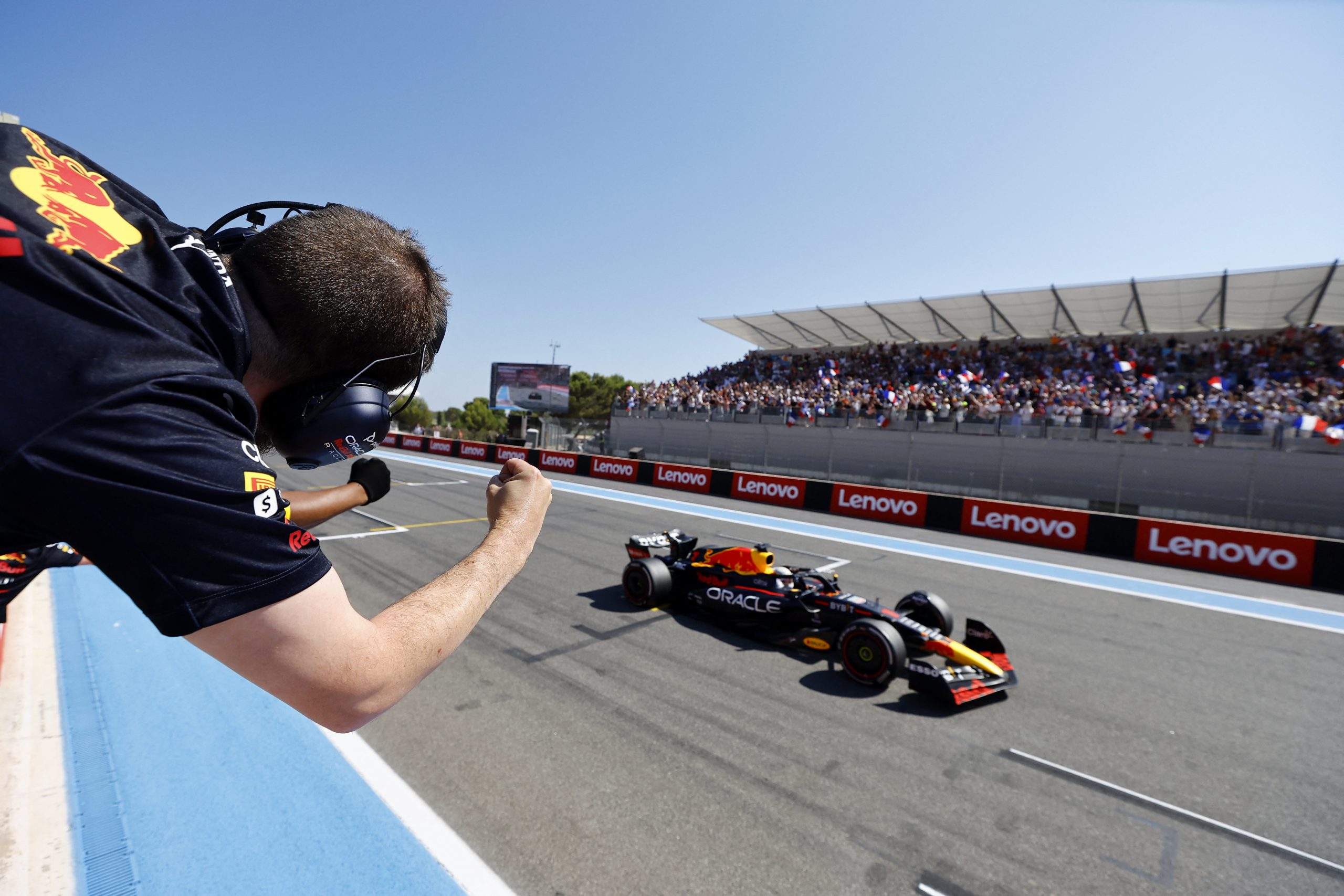 Max Verstappen took victory at the 2022 French Grand Prix, but only after leader Charles Leclerc crashed his Ferrari early in the race, somewhat gifting the win to Red Bull, as the Scuderia lost more points to their title rivals.

After three consecutive third place finishes, Lewis Hamilton moved up to the second step of the podium in what was his 300th race, on a day Verstappen increased his lead in the. Driver Standings to 63 points.

Leclerc was quick off the line and retained his lead over Max Verstappen in the Red Bull, but the Mercedes of Hamilton jumped Sergio Perez in the sister Red Bull, putting a spanner in the works as the Constructor Standings leaders looked to challenge the Ferrari.

Verstappen was unable to use the Red Bull’s superior straight-line speed, coupled with DRS, to jump Leclerc and was closely following the Ferrari for 17 laps before jumping into the pits.

But on Lap 18, Leclerc dumped the car into the wall at Turn 11 while leading the race.

Following the resulting Safety Car, Verstappen raced into the lead followed by Hamilton’s Mercedes, though there was little challenge from the seven-time world champion.

“I think we had really good pace from the start,” Verstappen said after the race, “but following around here with the heat, I could only go for a move once.

“We tried to stay clam, stay close. You never know how the race is going to go, but the car was quick today. I hope Charles is okay. I was just looking after the tyres until the end.”

Further back, Sergio Perez, Carlos Sainz and George Russell were fighting for third place with the Ferrari man successfully chasing down and passing the Red Bull, with the Mercedes then jumping Perez as well.

But Ferrari pitted Sainz from third with 10 laps to go, and put him on fresh Medium tyres, but the Spaniard could only make his way back up to fifth place.

Heartbreak for Leclerc and Ferrari

The Ferrari driver had started the race brilliantly, keeping Verstappen behind off the line and seeing out 17 laps of pressure from the Red Bull. Things looked like they were falling into place for Leclerc.

Then just as talk of strategy to determine the race win, images of Leclerc with his nose in the tyre wall, were broadcast all over the world as hearts sank among Ferrari fans.

Bad luck, driver error, tyre issues… whatever the reason, Leclerc’s desperate ‘nooooooo!’ on team radio says everything as his title challenge seems to be slowly ebbing away.

“Mistake, mistake, I’ve been saying,” Leclerc said. “I am performing at the highest level of my career but if I keep the mistakes then it is pointless.

“If we lose the championship by 32 points I will know where they are coming from but it is unacceptable.

“I go through the same process all the time and try to analyse. It is a mistake and that is it. It is trying to push too much and I lost the rear.”

Once again Mercedes showed their race pace after bagging a double podium for the first time in the 2022 F1 season, with Russell taking Perez and then defending well against the Red Bull to take third.

After Hamilton made it into third place at the start, he managed to stave off an initial challenge form Perez, despite his inferior straight line speed, and then took full advantage of Leclerc’s crash. Never close enough to Verstappen, but with a good lead over the third place battle.

Russell on the other hand, was down in sixth at the start, but benefitted from the Safety Car and then closed in on, then passed, the Red Bull towards the end.