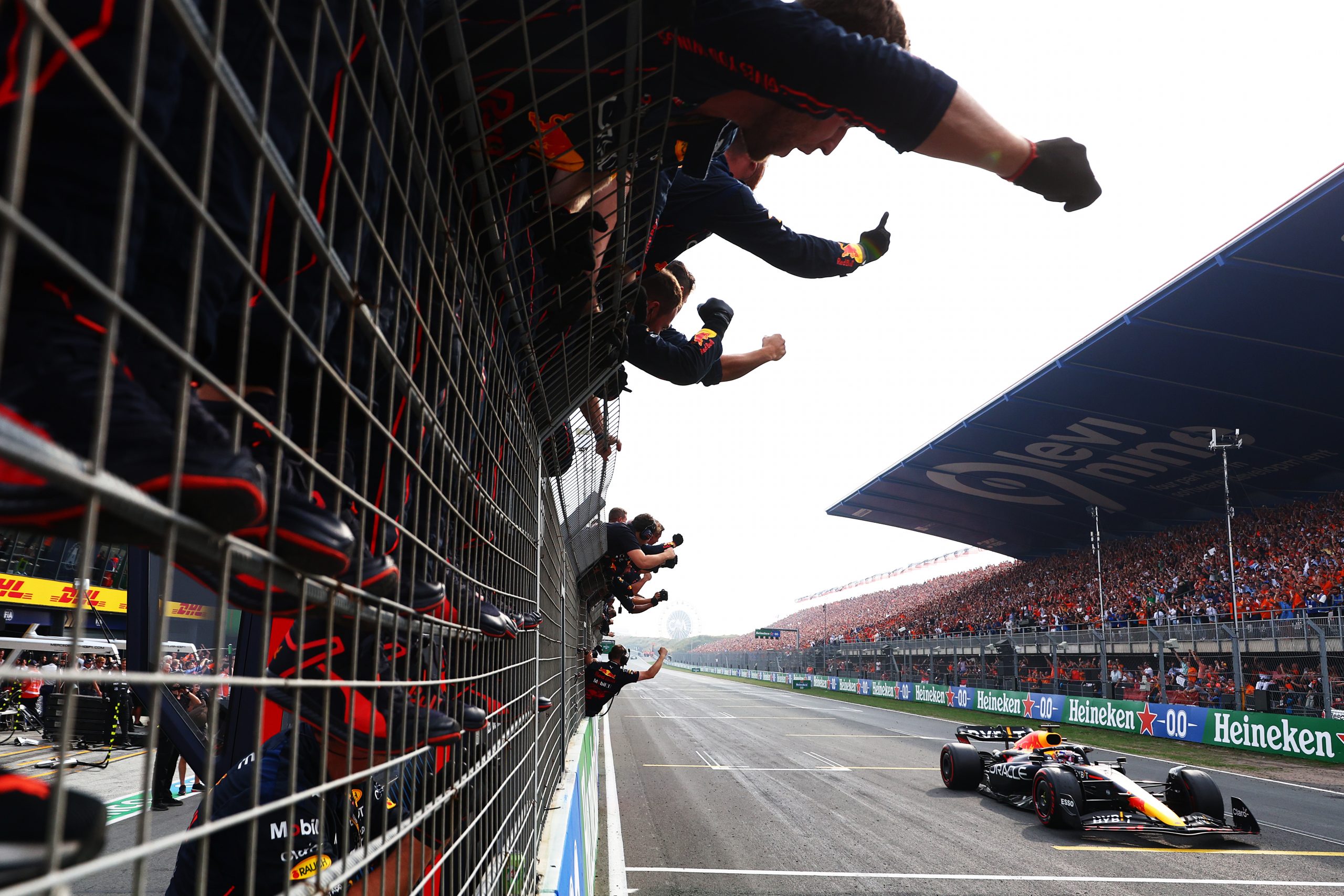 Max Verstappen passed Lewis Hamilton late on to win the 2022 Dutch Grand Prix, after the stricken Alfa Romeo of Valtteri Bottas brought out a late safety car to set up a grandstand finish at Zandvoort.

The race came alive in the closing stages and the Red Bull driver benefitted in front of his adoring home fans to cross the line four seconds ahead of Russell and extend his lead in the drivers’ championship to 109 points.

Hamilton led a Mercedes one-two after Verstappen opted to give up track position to fit softs when Bottas came to a halt on the main straight, but the Brackley-based outfit then pitted Russell to make the Dutchman’s task that much simpler and leave the seven-time world champion a sitting duck when racing resumed.

The pivotal and inevitable moment arrived on Lap 61 as the home hero breezed past Hamilton into Turn 1 on the restart and streaked clear, much to the delight of the Orange Army.

Behind, Russell and Leclerc also made the most of their softer tyres to finish second and third respectively, demoting Hamilton to a disappointing fourth.

Elsewhere, Carlos Sainz crossed the line fifth but had to settle for eighth after an unsafe release earned him a five-second time penalty.

Sergio Perez inherited fifth, while the Alpine of Fernando Alonso took the best of the rest crown in sixth.

It was the big unknown before lights out: what sort of pace was in the W13? Hamilton and Russell answered emphatically – but should they have won?

The Mercedes drivers were the only runners in the top six to start on the mediums, and they made it count. Hamilton fended off Perez into Turn 1 before settling into a nice rhythm behind Sainz, while his teammate held station a few seconds up the road in the early stages.

Any hopes of executing the one-stop strategy were dashed by the late drama and Mercedes will perhaps rue the call they made to leave Hamilton out on an old set of mediums.

Whether he would have been able to beat Verstappen to the chequered flag had he put on the softs we’ll never know, but the W13 came alive at Zandvoort.

In the end, the 37-year-old trailed home in fourth on a day that quite possibly represented his best chance to continue his record of winning at least one race in every F1 season he’s competed in.

The Brit couldn’t hide his frustration and lambasted the team over the radio, but it will do nothing to change the result, leaving the reigning champions to ponder, ‘what if?’

As those around them falter, Red Bull continue to get all the big calls correct. The latest example was as brilliant as it was bold, with the team opting to give up track position to the Mercs in the closing stages.

With little over 10 laps to go, the Dutchman trailed Hamilton, who had shown great pace throughout, but made quick work of the seven-time world champion when the safety car period ended as the soft tyres proved too strong for the old mediums.

In the end, Verstappen cruised over the line more than four seconds clear of Russell, as he and his well-oiled machine of a team continue to make a mockery of their opposition.

It’s a matter of time until both championships are wrapped up, and they couldn’t be more well-deserved.

Another race, another Ferrari blunder. Sainz, this time, was the one to suffer, with the pit crew not ready with four tyres when he came in at the end of Lap 14 to switch onto the mediums. The result was a 12.7 second stop that put paid to his hopes of a podium.

To compound the misery, Perez ran over a discarded Ferrari wheelgun as he left his box ahead, having arrived behind.

On the pitwall, Mattia Binotto described it as “a mess” in the immediate aftermath. It’s the latest in a long line of mistakes that have plagued the Maranello-based outfit this season.

To compound the Spaniard’s misery, he was assessed a five-second penalty for an unsafe release after his final stop, meaning fifth became eighth and capped off a day to forget.

In the other side of the garage, Leclerc benefited from the late drama to snatch third but the lack of race pace of the F1-75 at Zandvoort was stark.

The team will be counting down the days until the next clean weekend.