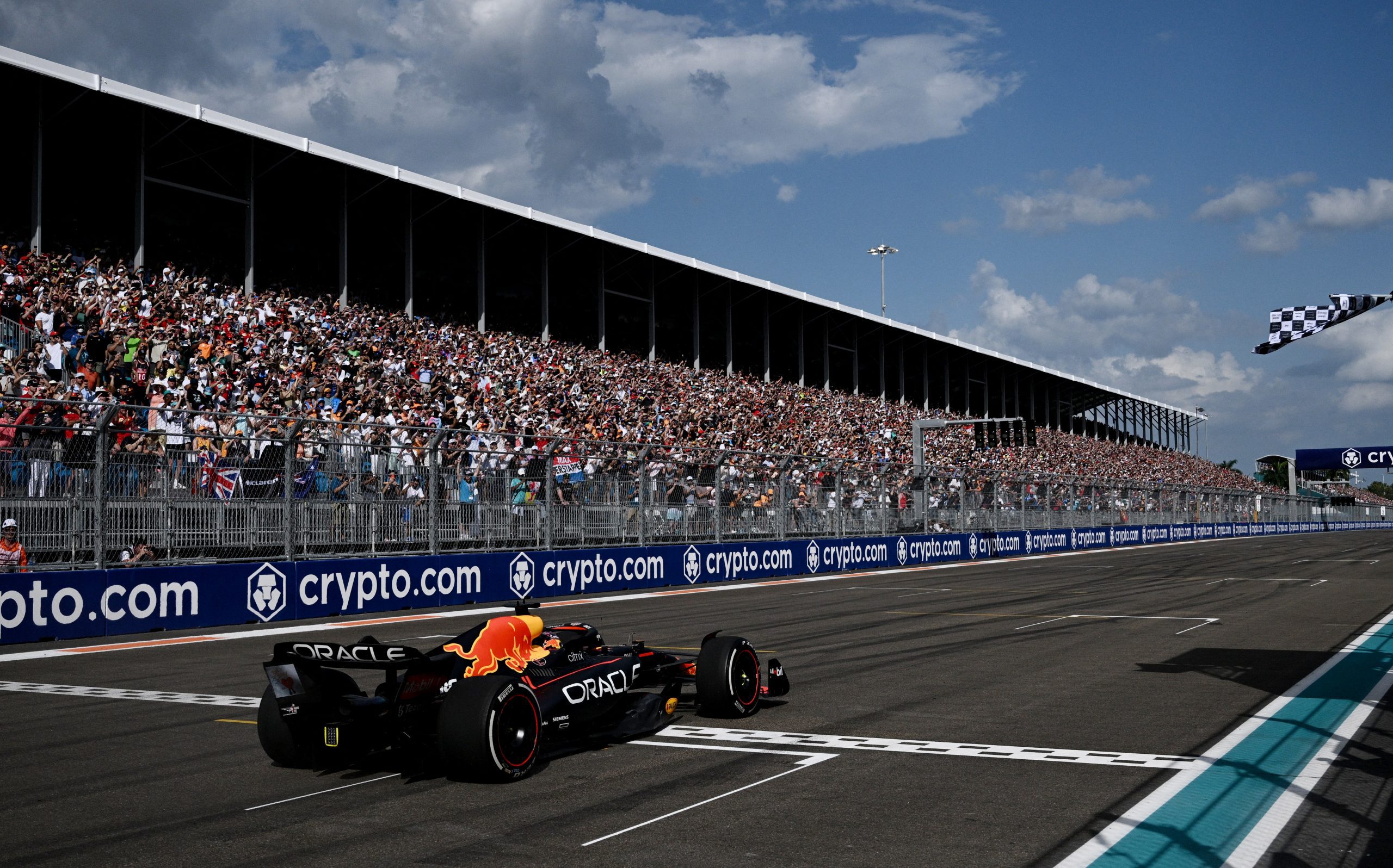 Max Verstappen has done it again as he found his top form to take another impressive victory at the Miami Grand Prix as Charles Leclerc was forced to settle for second and has his lead in the championship cut to 19 points.

It was the same-old story of not quite having the pace to live with the top two for Carlos Sainz, although he did manage to just keep Sergio Perez at bay for his third podium of the season.

The Miami International Autodrome certainly produced some great racing throughout the race and the event can be seen as a success. After all, Formula 1 will be visiting Miami for the next 10 years.

Friday practice was pretty awful for Verstappen as he tapped the wall, had a hydraulics failure and his rear brakes caught fire which meant he completed just five laps of the track.

However, he showed his class by getting back on the pace and didn’t let his frustrating Friday get to him.

A small mistake on his final run in Q3 handed a front row lockout to Ferrari, but Verstappen was very confident about the long run pace of his Red Bull and he had every reason to feel that way.

Overtaking Sainz bravely around the outside of Turn 1 was key and it seemed like Verstappen had that move painted in his mind in the build-up to the race.

From there, a small mistake from Leclerc made the pass for the lead relatively easy for Verstappen as he withstood pressure from the Monegasque driver after the safety car to win for the third time this season.

“It neutralised things. Charles in DRS we couldn’t shake him off and Max kept it clean, didn’t make any mistakes. It took about 5, 6 laps to break DRS and he was able to manage it from there.

“In the early laps Max was hanging and looking after the tyres. that was always our tactic look after the right tyre the right front and keep Charles under pressure. A real tactical race.

“That DRS is so powerful they could close in in the first section and we couldn’t drop them, eating away a tenth a tenth a tenth. Max was able to break DRS and build a lead.”

We mentioned how Verstappen‘s Imola victory may kickstart an incredible run of form, and his performance in Miami underlined that. He’s now the driver to beat.

Nothing Ferrari could do about the win

Leclerc threw everything at Verstappen as he visibly clunked over the kerbs and got right up to the walls at the end of the race to try and get close enough for an overtake.

This time, Leclerc didn’t overstep the mark and probably maximised his result by taking 18 points because Ferrari‘s straightline speed deficit to Red Bull was telling.

“We struggled quite a bit with the medium tyres,” said Leclerc post-race. “It made the race a bit difficult from that moment onwards. On the hards we were more competitive. Towards the end I thought I could get Max at one point.

“Today Red Bull had the advantage in terms of pace, but it was fun. It’s amazing to see so many people and great to have so many Ferrari fans in the grand stands.

“We need to keep pushing, every race will be important throughout the year.”

The two teams might have the same lap times on the stopwatch, but the way they are creating their speed is completely different.

Why? It’s easy to overtake and defend with a car that has good straightline speed, as Verstappen showed in Miami.

The other key for Red Bull is their tyre wear is similar to Ferrari, even though they have less downforce. Red Bull‘s car philosophy could be the deciding factor in this title race.

Sergio Perez was set to make the race come alive in the closing stages after he pitted for a new set of medium tyres under the safety car.

However, the Mexican was carrying an issue which cost him around half a second per lap since he reported a loss of power on lap 21.

Red Bull told Perez to change his engine settings which solved the problem, but not fully as he lost around 30bhp which meant he was not properly able to challenge Sainz on the restart.

As for Sainz, he should be happy with his third place because he had gone through a very bad patch, having not completed a racing lap in Melbourne and Imola, and crashed again during second practice.

Sainz didn’t let it knock his confidence as he was close to Leclerc in qualifying, but just lacked a few crucial tenths in the race, not for the first time this season.

What could have been for Mick Schumacher

Mick Schumacher was having his best race of the season, showing great pace despite a poor strategy from Haas.

The team opted to pit both Schumacher and Kevin Magnussen early which put them out behind the Aston Martin drivers so they lost a heap of time in the DRS train. They could easily have both finished in the top 10 without this.

Nevertheless, Schumacher was running in eighth until the safety car came out and was forced to race on old, hard tyres against Esteban Ocon and Sebastian Vettel on new soft rubber.

When Vettel went by, Schumacher tried to go for a gap back down the inside at Turn 1, but hit his compatriot and ruined both of their races.

“The car was really good so I’m gutted that we didn’t get to stay in position – I think it was our best race so far this year,” said Schumacher.

“We’re all racers, we’re all trying, and it was always going to be tough to keep new tires behind us and it was very unfortunate to end the race in that way. We were on the road to getting points, but we’ll have to wait some more.”

Schumacher must be so frustrated because the pace is there, it’s just Haas can’t seem to be able to execute a clean weekend or nail their strategy.

Haas have to get their act together because they are throwing away crucial points far too often.

We didn’t see too much of Alex Albon‘s race and amid all of the drama at the end, he ended up in ninth, improving on his 10th place from Melbourne.

Williams had great pace on Friday but lost it all in qualifying which was disappointing. However, Albon made up for it with a strong drive on Sunday and picked his way through the shenanigans to pick up a potentially important two points.

“I’ve got a team around me and I feel a lot of support at Williams,” Albon told Sky Sports. “We are on the rise and I feel like I’m improving and more prepared as a driver.

“I didn’t understand the whole big team [environment] for half a year and I realised what I needed to work on.

“It was tricky with the year out because it’s not like tennis where you can pick up a tennis racquet. But I feel like I went in the right direction and I’m doing the right things.”

Unfortunately, Nicholas Latifi is still struggling and is showing no signs of recovering anytime soon.

Latifi was 35 seconds off the back of the pack before the safety car came out, whilst Albon was right in the midfield battle.

There was a lot of hype in the week leading up to the Miami GP and the race weekend largely delivered.

The atmosphere was fantastic with multiple celebrities, many of which Martin Brundle couldn’t recognise, and, more importantly, the track was a real challenge.

It had a mix of everything and caught the drivers out, testing them too thanks to the intense heat.

Verstappen, Leclerc and Sainz were absolutely exhausted in the cool down room and that’s what we want to see. It shouldn’t be easy.

Some safety features can be added such as a tecpro barrier at the entry of Turn 14 where Sainz and Ocon had huge impacts for what looked like relatively small accidents, but the actual track layout was excellent.

Many drivers weren’t happy that there was one racing line and that it felt like it was wet when you went off line. However, that adds to the challenge and it generally didn’t hinder the racing too much.

The battle for the lead was quite dull after Verstappen took the lead and before the safety car, but that was no different to Imola or Melbourne. This happens in F1 and I have no doubt the Miami GP will produce some classic moments in years to come.