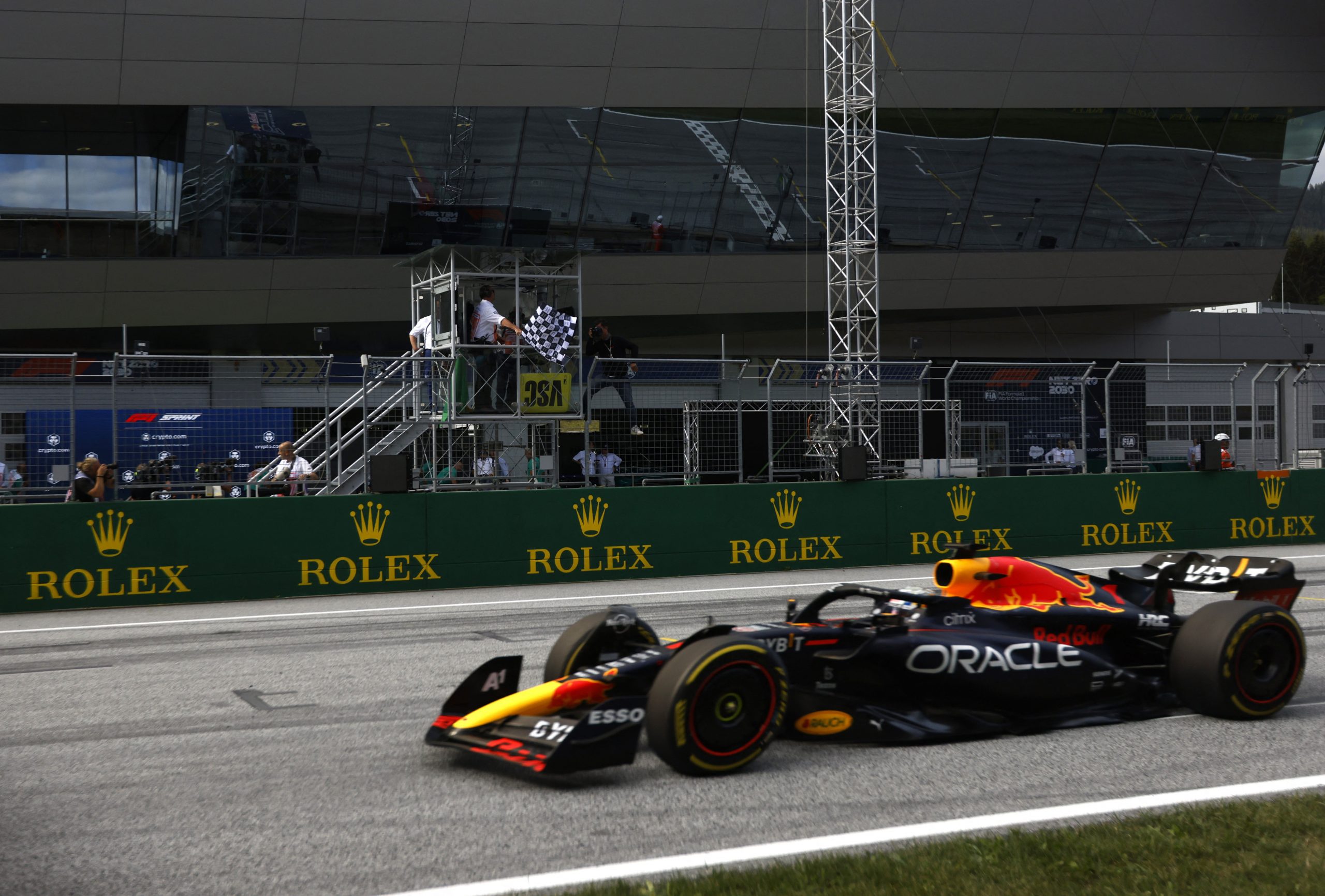 Max Verstappen stormed to victory in the Austrian GP Sprint Race, the Dutchman converting his pole position from qualifying into another front row start for the Grand Prix.

The Red Bull driver fended off early challenges from the Ferraris of Charles Leclerc and Carlos Sainz to come over the line first yet again at the team’s home track in the Styrian mountains, and the Dutchman will be difficult to beat in Sunday’s full-length race.

Sainz actually passed Leclerc at the first corner after a delayed start due to an engine fault for Alfa Romeo’s Zhou Guanyu, but the Spaniard was passed by his teammate into Turn 4 following a poor exit from the uphill 90 degree Turn 3 attempting to overtake Verstappen.

Leclerc then fended off a number of other attempts by his teammate to take second, and he will start alongside title rival Verstappen on the front row for the Grand Prix.

The start of the race was delayed by a few minutes, with the drivers going around for a second formation lap, after Zhou’s Alfa Romeo’s engine cut out as he rounded the final corner to take his place on the grid.

That meant that the Chinese driver was forced to start from the pitlane despite managing to get the car going again, joining Alpine’s Fernando Alonso who also returned to the paddock after failing to get going for the formation lap.

It later emerged that the Alpine had suffered an electrical issue, which forced Alonso to retire from the Sprint Race in a disappointing development for the French team, which had looked competitive throughout the practice sessions.

There was more action further down the grid as Lewis Hamilton, starting from 9th after crashing out of Q3, battled hard to pass the Haas of Mick Schumacher, the young German fending off repeated overtaking attempts by the Mercedes into Turn 3 and 4.

Eventually however, Schumacher lost the DRS to his teammate Kevin Magnussen, and Hamilton managed to get ahead and take the final points on offer in the Sprint Race.

Hamilton’s teammate George Russell, who also crashed out of qualifying, managed to hold onto 4th place, starting ahead of the second Red Bull of Sergio Perez who worked his way back through the pack following his late qualifying penalties which dropped him out of the Sprint top 10.

Elsewhere it was a day to forget for AlphaTauri’s Pierre Gasly, as the Frenchman was once again involved in a Lap 1 crash, this time moving just in front of Hamilton on the entry into Turn 1.

However, this time it was Gasly who went off the track, dropping him back down the grid and eventually finishing the Sprint Race in 15th.

Similarly Aston Martin’s Sebastian Vettel had worked his way up from the back of the grid into 14th at one point, but his race was ruined after a trip to the gravel following a collision with Alex Albon which earned the Williams driver a 5 second time penalty.