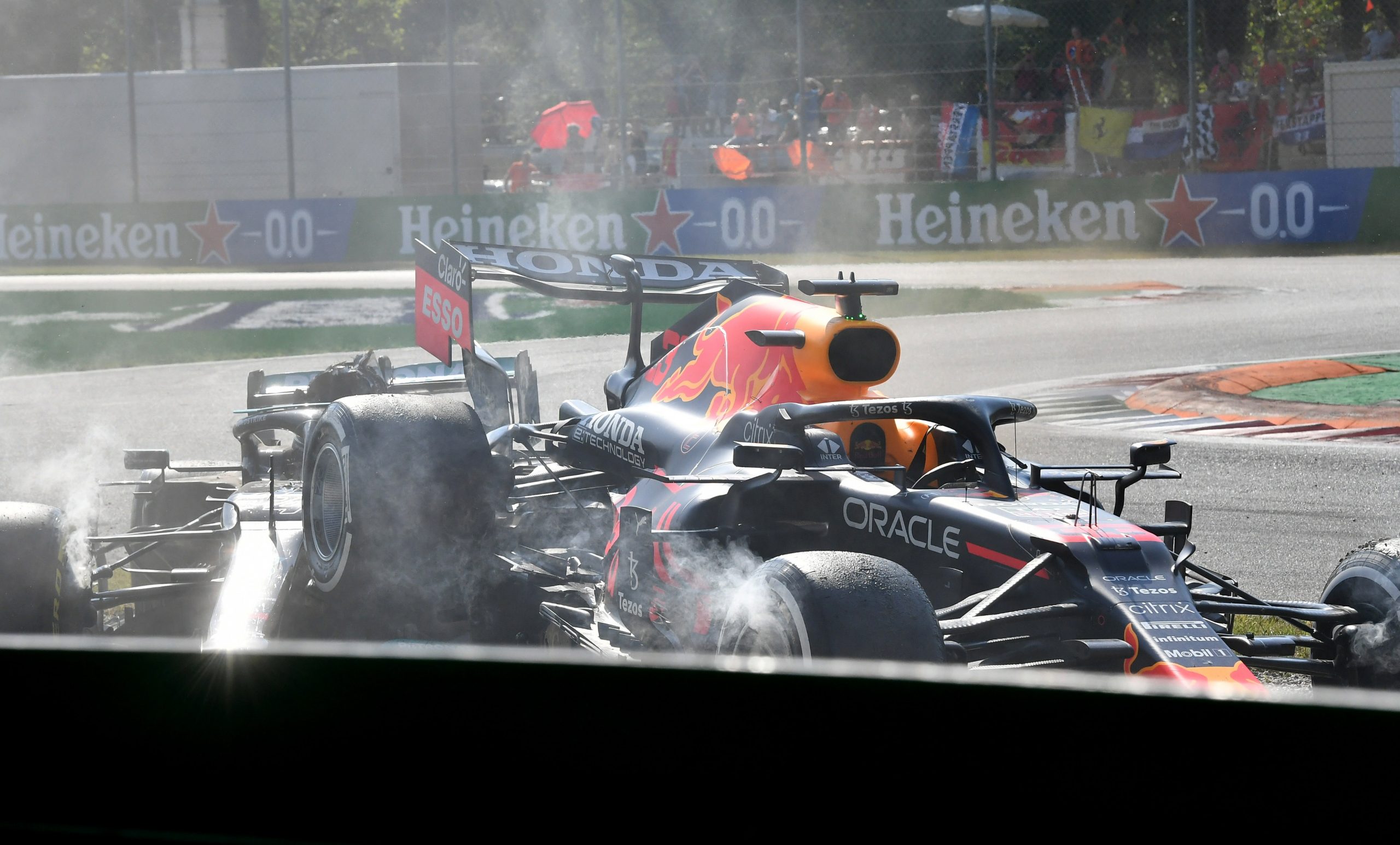 Max Verstappen has been given a three place grid penalty for the Russian Grand Prix after his crash with Lewis Hamilton at the 2021 Italian GP at Monza on Sunday.

Following a meeting with the stewards, in which they heard from both drivers, they concluded that Verstappen was to blame for the incident and was handed the punishment.

As well as a three place grid penalty in Russia, Verstappen also has two penalty points added to his super licence.

“Car 44 [Hamilton] was significantly ahead of Car 33 [Verstappen],” a statement from the stewards read. “Car 33 braked late and started to move alongside Car 44, although at no point in the sequence does Car 33 get any further forward than just behind the front wheel of Car 44.

“The stewards observed on CCTV footage that the driver of Car 44 was driving an avoiding line, although his position caused Car 33 to go into the kerb. But further, the stewards observed that Car 33 was not at all alongside Car 44 until significantly into the entry into Turn 1

Immediately after the race tensions were high as you would imagine, and Verstappen was clear in his assertion that Hamilton was to blame for the crash as he never allowed the Red Bull driver any room on the apex of the corner.

“We realised it was going to be close into Turn 1,” Verstappen told Sky Sports F1. “[Hamilton had to] cut across after the white line [at the pit lane exit] and I had to go on to the green part to not touch.

“Even if he would have left me just a car’s width, we would have raced out of Turn 2 anyway. And I think he would have probably still been in front. But then he just kept on pushing me wider and wider. And at one point, there was nowhere to go.

“He just pushed me onto the sausage kerb. And that’s why, at the end of the day, we touched because of the rear tyre.”

Meanwhile Hamilton revealed that his main aim was to get going again and regain any places that were lost, but also highlighted Verstappen not checking he was ok after the incident.

“I definitely didn’t think Max [Verstappen] would lose control over the kerb and run into me,” Hamilton told reporters after the Italian GP. “But looking back at the footage, it obviously happened incredibly quick.

“In the car, all I can think of is getting going and how many positions I’m losing and I’m still just in race mode.  And I’m sitting there in a little bit of pain, but just like, come on, let’s go. But unfortunately, the car wouldn’t move.

“I did see Max get out and just walk by. I found that a little bit surprising, because ultimately I think when we go out, and when we do have incidents, the first thing we want is make sure if the guy that we crashed into or we collided with is okay.”