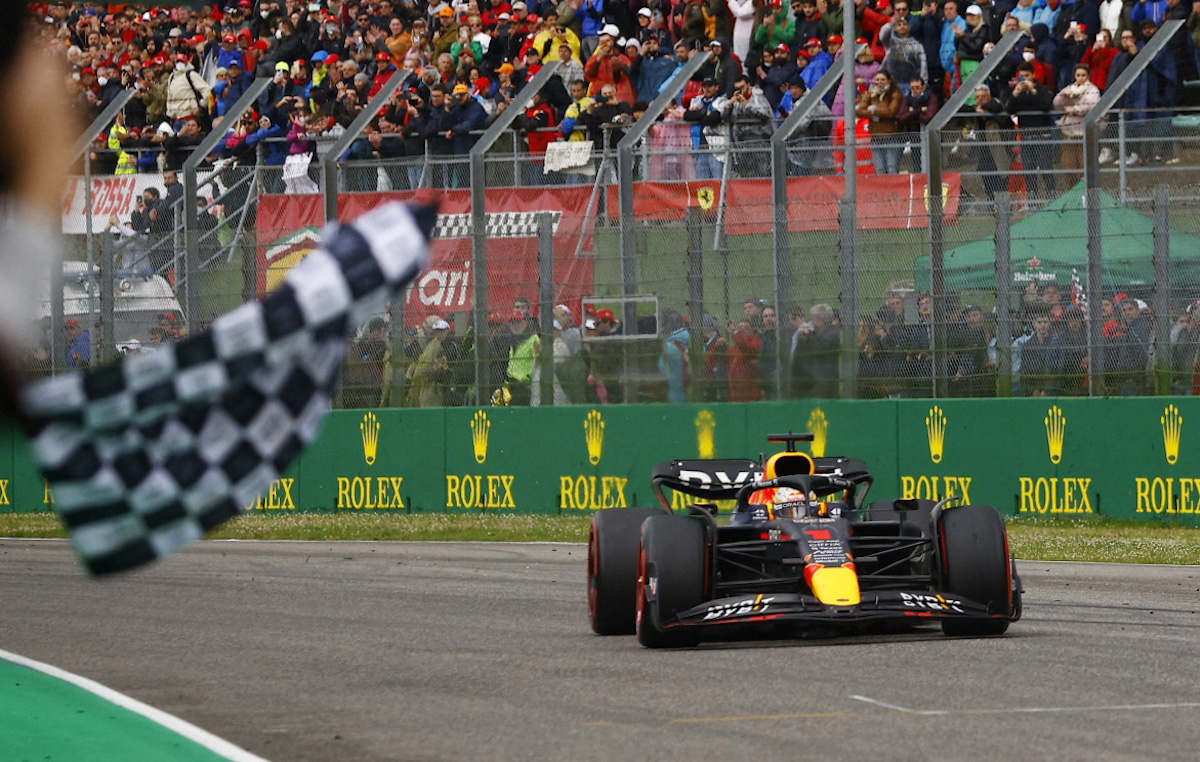 On a day that saw his main title rival Charles Leclerc spin from third, Max Verstappen put in a dominant performance to win the Formula 1 2022 Emilia Romagna Grand Prix at Imola and take full advantage of a mistake from the Ferrari.

Verstappen’s teammate Sergio Perez made it a one-two for Red Bull on what is essentially Ferrari’s home circuit. McLaren’s Lando Norris finished third marking a great day for McLaren.

Ferrari meanwhile had an afternoon to forget with Carlos Sainz retiring on the first lap after a tangle with Daniel Ricciardo and Charles Leclerc making a mistake while he was third and dropping down to sixth.

A damp track greeted the drivers as they made their way to the grid. With certain parts of the circuit wet and other parts dry, the intermediate tyres were the tyre of choice for all 20 drivers.

Verstappen nailed the race start with his teammate Perez and Norris getting the better of Leclerc. Leclerc’s teammate Sainz found himself in the gravel after tangling with McLaren’s Ricciardo facilitating the need for a Safety Car.

The other big winners were Mercedes’ Russell and Haas’ Magnussen who moved up to sixth and fifth respectively.

As the race got underway again, the Red Bull drivers maintained their advantage with Leclerc pressuring Norris, the McLaren driver however would maintain his advantage with Magnussen closing in on the Ferrari. Leclerc would eventually pass Norris on Lap eight, with the Monegasque driver setting off after Perez.

As the battle at the front raged on, Alpine’s Fernando Alonso found himself dropping down the order after sustaining some damage during the opening exchanges with the Spaniard becoming the second retiree.

As the race went past the 10 lap mark, Russell pulled off a great move on Magnussen at the chicane, with the Mercedes driver making great headway after a poor qualifying session.

As the battles raged on track, the drivers and teams faced a conundrum, come into the pits for slicks or wait for the rain, which seemed inevitable.

Despite the prediction of rain, Ricciardo pitted for a set of medium tyres with all eyes now focused on the Australian’s laptime. McLaren’s decision to pit Ricciardo lead to a flurry of action with Perez the first of the front runners to come in.

Hamilton’s woes meanwhile were compounded with the British driver making contact with Alpine’s Esteban Ocon in the pits with the latter handed a five-second time penalty for an unsafe release.

Hamilton endured a very frustrating afternoon with the seven-time world champion being lapped by Verstappen. The British driver struggled against the AlphaTauri of Pierre Gasly with the Frenchman himself struggling to get past Williams’ Alex Albon.

With several cars battling in the midfield, questions about the DRS began to arise with the Race Director Niels Wittich taking an extremely conservative approach with respect to its deployment.

The DRS was finally enabled on the 34th lap of the race, though questions will raised regarding why it took so long for race control the enable its use.

As Ferrari gambled on a second pit stop, Lelcerc while chasing down Perez, who himself made a second stop, spun at the Variente Alta chicane damaging his front wing and pitting for a replacement. Leclerc’s mistake promoted Norris into the podium places with Russell moving into fourth and Bottas into fifth.

All this played nicely into the hands of Leclerc’s title rival Verstappen, who comfortably extended his lead after following Leclerc and Perez into the pits.

The final stages of the race witnessed Bottas close in on Russell with the Finn finishing right behind the rear wing of the Mercedes.

Eventually though it was Verstappen who enjoyed the spoils with the Dutchman claiming his second win of the season and also move into second place in the Drivers’ Championship.