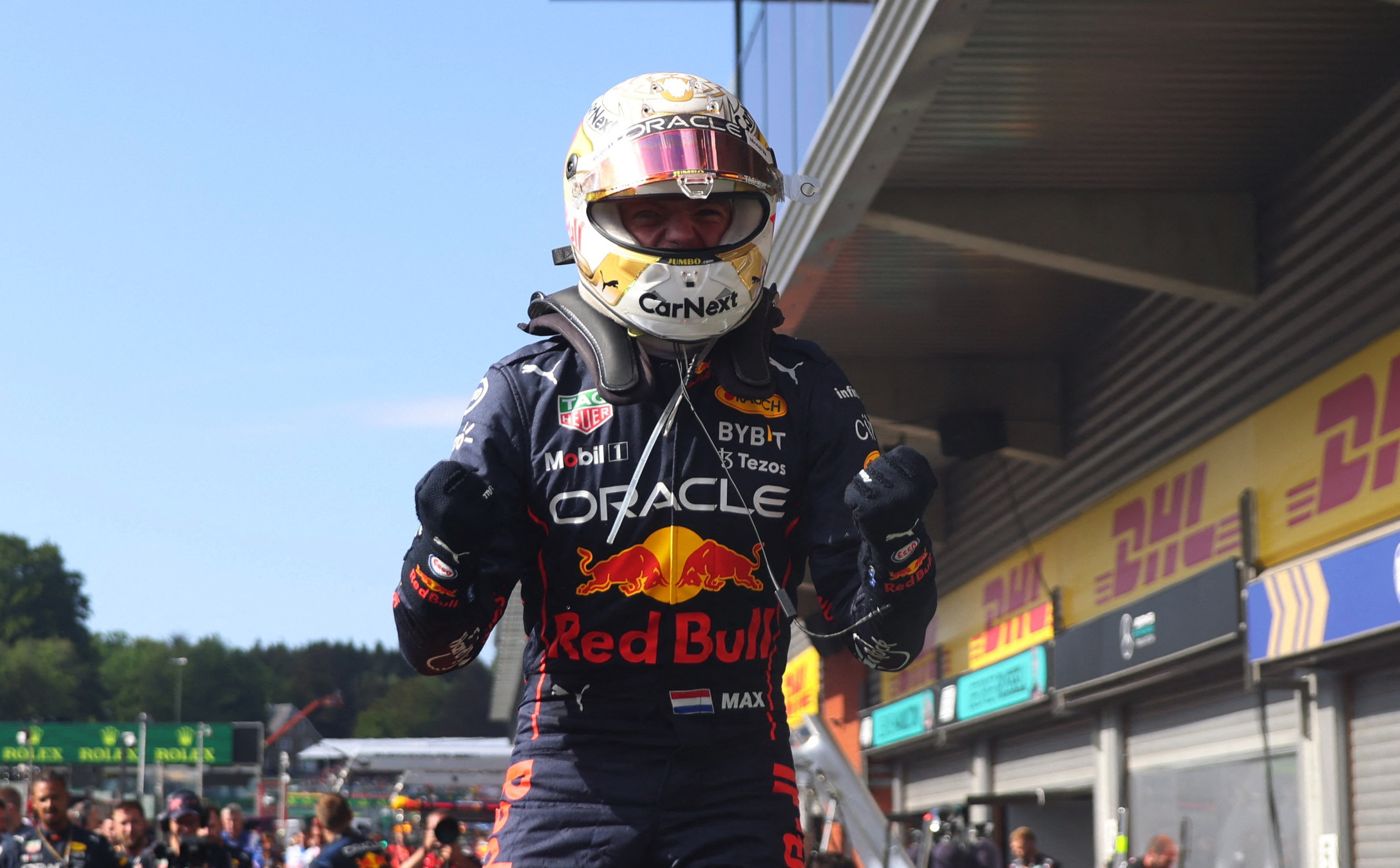 Max Verstappen surged from a compromised grid position to take victory in the 2022 Belgian GP as the Red Bull driver once again dominated the rest of the field to finish 17 seconds ahead of teammate Sergio Perez in second.

Verstappen had started the race from 14th after taking engine penalties for the race, just ahead of his nearest championship rival Charles Leclerc, but rose to eighth by the end of the first lap, and the Dutchman had a clear pace advantage over the rest of the pack throughout the race.

He easily cleared the midfield runners as he closed in on Leclerc’s Ferrari teammate Carlos Sainz, who led the race in the early stages after inheriting pole position from Verstappen due to the grid penalty.

But Sainz had no answer to the pace of the reigning world champion, with Verstappen overtaking the Spaniard at the end of the Kemmel Straight on Lap 18 following the first pit stops and never looking back.

Verstappen now stands 93 points clear at the top of the Drivers’ Championships, and after yet another imperious performance cheered on by the Orange Army at the Circuit de Spa-Francorchamps in a rapid Red Bull car, it’s hard to see how anyone could close him down.

Leclerc struggled to cut through the field with the same ease of Verstappen, and suffered yet another piece of bad luck when he was forced to pit early on due to an issue with his front right tyres.

He finished fifth overall over the line and managed to secure the fastest lap, but was handed a five-second penalty for speeding in the pit lane and ended up sixth overall.

While Mercedes struggled across the weekend for pace despite hopes that the team would maintain their momentum from before the summer break, George Russell cemented his reputation as Mr Consistency with another top five finish in fourth.

While Verstappen’s absolute dominance meant there was little drama at the front of the pack once he took the lead, the thousands who flocked to the Ardennes Forest were treated to an action-packed opening period with overtakes aplenty and two crashes on the opening lap.

The first involved Lewis Hamilton and Fernando Alonso, with the two going wheel to wheel into the Les Combes chicance after both managed to get ahead of the Red Bull of Perez with the Mexican struggling off the line.

The former teammates raced hard all the way down the Kemmel Straight, but on the entry to the Les Combes chicane, Hamilton tried to go around the outside of the Alpine, but in doing so closed the door on Alonso and the two collided, sending the Mercedes flying into the air.

Hamilton managed to continue for part of the lap, but had visibly suffered damage and was forced to retire from the race, losing his record of crossing the line in every race in 2022 so far.

In an interview with Sky Sports F1, he later took full responsibility for the incident, but the crash and retirement summed up what has been a chastening weekend for the former world champion and the Mercedes team.

The mixed up grid order due to the host of penalties handed out promised a few surprise names in the points in Belgium, and several drivers who have struggled in recent races managed to walk away with points.

Alex Albon had looked pacy all weekend, the British-Thai’s Williams the fastest car on the track in the top-speed heavy first sector at Spa, and he scored his second points of the season, holding on to 10th place at the chequered flag.

Sebastian Vettel will be similarly pleased, as the German’s final visit to Spa as an F1 driver ended in a points finish in eighth, just ahead of the AlphaTauri of Pierre Gasly in 9th.

It was another solid performance from Alpine as they once more set out their stall as the best of the rest, with Alonso finishing in fifth, with Esteban Ocon in seventh.

For their midfield rivals McLaren, it was a day to forget, with Lando Norris compromised by starting from the back of the grid and finishing in 12th, while Daniel Ricciardo struggled back in 15th.