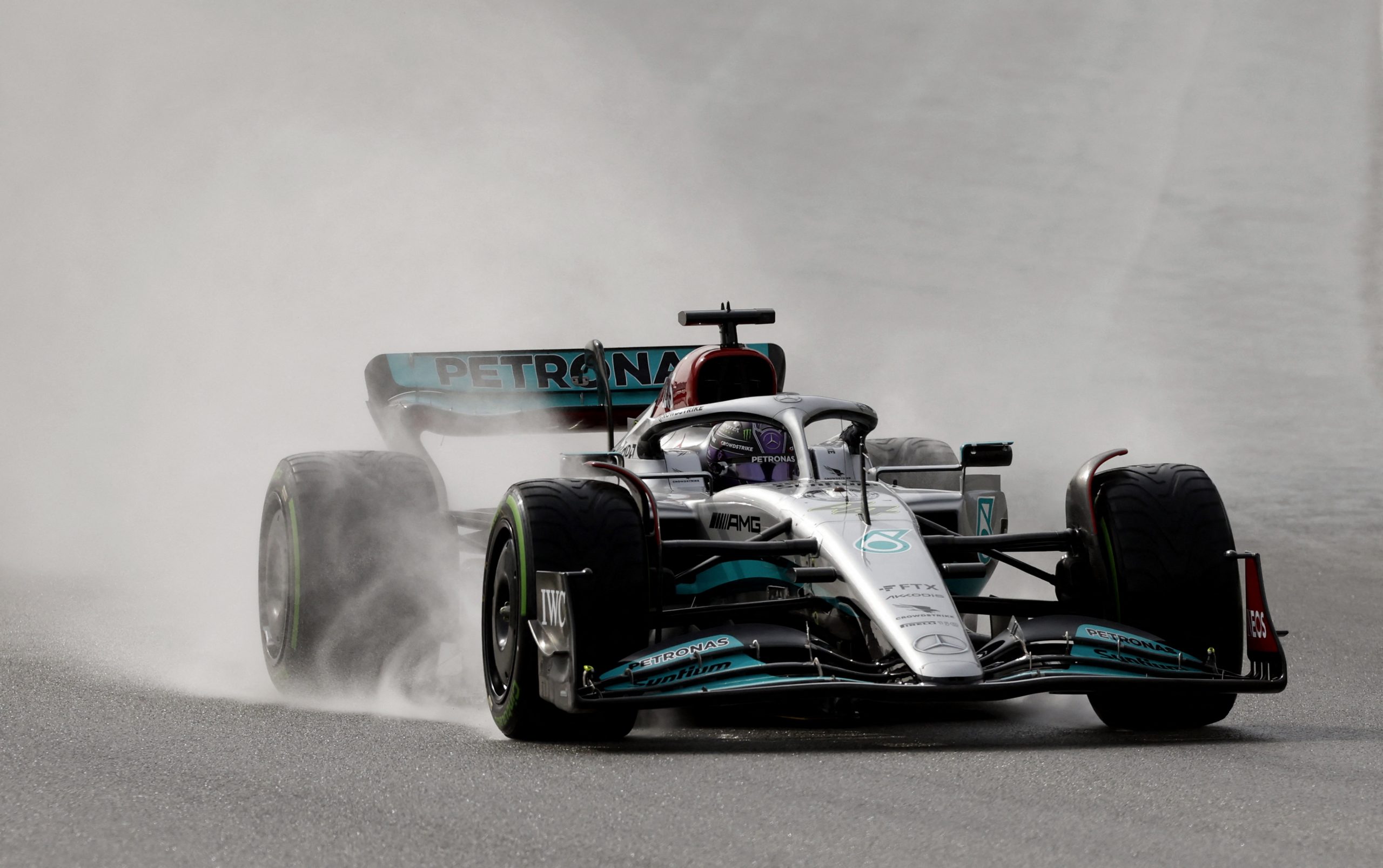 Mercedes hit back on the final day of testing in Barcelona as Lewis Hamilton topped the timing sheets from teammate George Russell.

It was the most chaotic day of pre-season testing so far with five red flags in the morning session and reliability problems creeping in for some teams.

There appears to be a clear split in the pecking order, although it’s still very difficult to read who is in the best position going into the Bahrain test on March 10-12.

The Silver Arrows had a relatively quiet test until Russell bolted on the C5 compound, the softest tyre in Pirelli‘s range, to set a 1:19.233 in the morning which was three tenths of a second quicker than any other lap time this week.

Russell also completed the most laps during the morning so it was by far Mercedes‘ best showing in Spain.

After the wet track running in the afternoon, Hamilton went quickest when the circuit dried out on an impressive 1:19.141 on the C4 tyres, before going 0.003 seconds faster at the end of the day on the C5 compound. It’s fair to say Mercedes had an excellent Friday.

Defending champion Verstappen‘s 1:19.756 was set on the C3 compound iwhich bodes well for Red Bull who bounced back from a difficult Thursday when Sergio Perez suffered a gearbox failure.

If anybody thought Mercedes or Red Bull wouldn’t be at the pointy end of the field, think again.

Every team are trying to limit the amount of porpoising their cars are suffering on the straights by making big set up changes.

McLaren appear to be the team that have been least affected by the sudden airflow changes at high speed, perhaps due to their low, wide sidepods whereas other teams have designed extreme undercuts.

Ferrari team principal Mattia Binotto believes whichever team can get on top of the porpoising the quickest will have a big advantage at the start of the season.

As for Ferrari, Charles Leclerc and Carlos Sainz continued to run trouble-free, leaving the Scuderia in a buoyant mood as they aim to end their 14-year wait for a championship.

Along with McLaren, Ferrari have had a near-perfect test with no major issues and plenty of mileage on the board.

Alpine had been running so well until Friday morning when a hydraulics failure led to a dramatic engine blowout whilst Fernando Alonso was behind the wheel.

If the scenario of Alpine deciding to turn up their engine on the final day in Barcelona, only for a fire to ignite at the back of the car, is true then the team could face major reliability issues at the start of the season.

It’s not how Alonso or Esteban Ocon wanted to end the first test and they can’t be confident that their power unit will hold up, should Alpine want to push the performance.

A bad day for several teams

An oil leak for Aston Martin meant Lance Stroll had no running in the afternoon, a suspected leak for Haas forced Mick Schumacher to the sidelines for the day and a crash for Pierre Gasly put AlphaTauri out of action for the second half of the Friday.

All three teams lost valuable track time, although the wet weather test for the early part of the afternoon limited the damage.

It goes to show, having a smooth test is far from easy and many teams have been caught out by problems which they can’t see coming.

Alfa Romeo at the back?

Picking out which teams will be bringing up the rear of the field is just as tough as the front.

Alfa Romeo have had a tough time at the Circuit de Barcelona-Catalunya, spending the majority of the green flag running in the garage.

It seems Alfa Romeo are struggling the most with the porpoising which is damaging their floor and gearbox, leaving the team to make repairs whilst their rivals are racking up the lap count.

Valtteri Bottas and Guanyu Zhou will be on the backfoot going into the Bahrain test, and Alfa Romeo must find a solution to these problems soon because they can’t afford to lose much more track time.

Given Williams‘ promising test, Alfa Romeo may be fighting at the back with Haas in 2022.

What to expect from Bahrain

The first test in Spain was all about mileage and reliability, areas some teams have got on top of.

Focus will soon turn to outright performance where we will see which team have the car to beat and who could have a difficult season.

Four teams are at the front of the field: Mercedes, Red Bull, Ferrari and McLaren. In what order? That’s anyone’s guess and it will be fascinating to see if any of those teams have a clear advantage in Sakhir.

We will be able to turn to sector times and long run pace to give us a clear idea of the pecking order, and everything so far suggests at least two teams will be battling for the title.