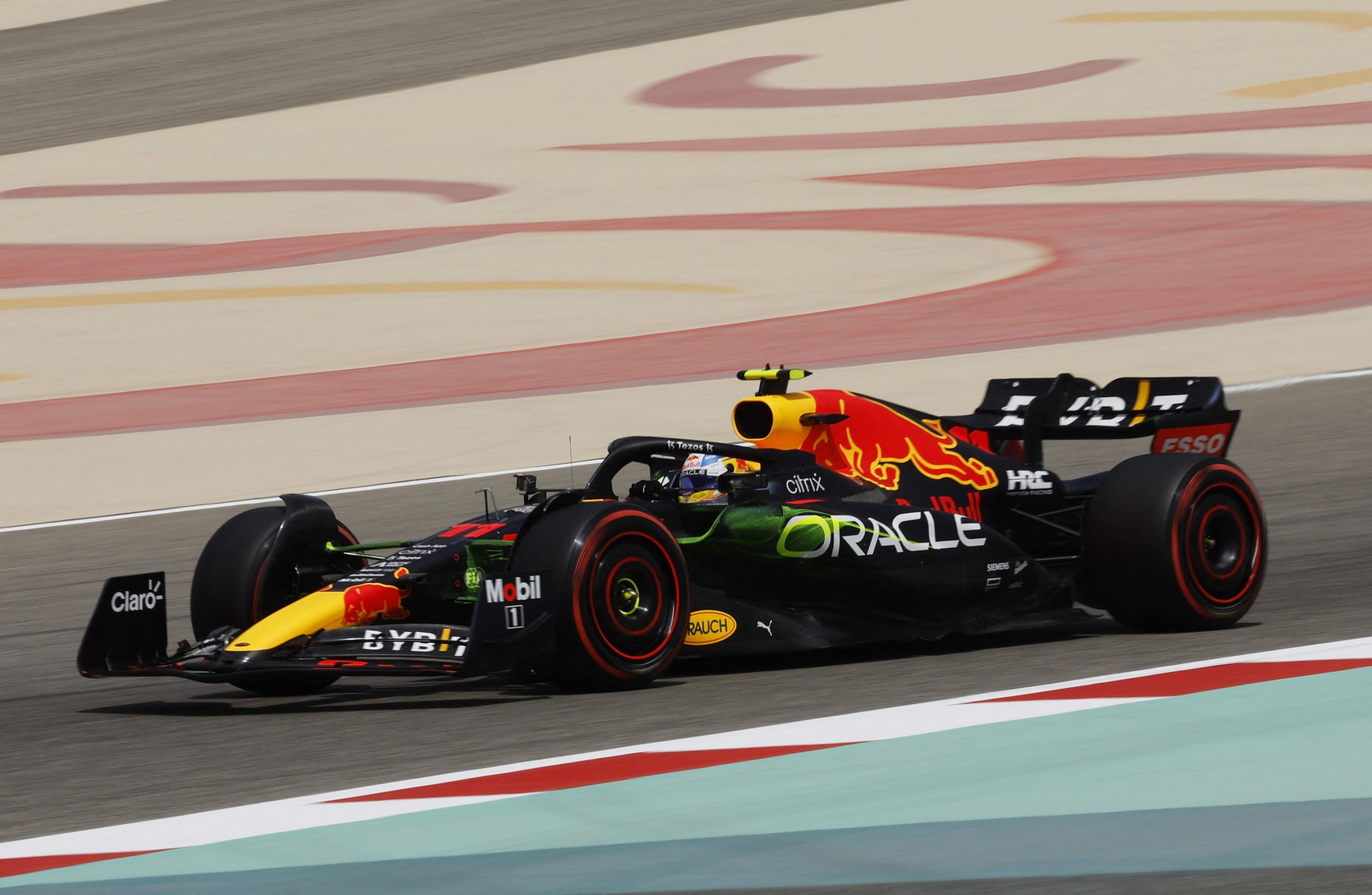 Red Bull had a relatively quiet pre-season test until Sergio Perez and Max Verstappen topped their respective sessions at the Bahrain International Circuit.

Verstappen used the softest C5 tyre compound to dispose Charles Leclerc from top spot to set the fastest time of the Bahrain test by 0.695 seconds, before Mick Schumacher went second in the Haas after the team’s additional two hours at the end of the day.

If that wasn’t impressive enough Verstappen also showed very strong pace on other short and long runs to make Red Bull the favourites going into the season-opening Bahrain Grand Prix.

The RB18 was visibly very understeery during the first two days in Bahrain, but Red Bull brought new sidepods, a new front wing and a new floor to the car on Saturday and it has worked wonders.

Red Bull‘s sidepods now have a bigger undercut to change the air flow at the backend of the car.

Perez and Verstappen looked much happier, with the front end of the car rotating beautifully compared to the rest of the grid.

It was Verstappen‘s 1:32.645 on the C3 tyre with two hours of the test remaining which caught people’s attention.

The lap time itself was nothing special, but Red Bull appeared to be able to run the car low to the ground without any indications of porpoising.

After that fast run, Verstappen did consecutive laps in the 1:37s on the C2 tyre which is miles quicker than any other long runs that have been done in Bahrain. Even if the car didn’t have much fuel, those are very quick laps.

Don’t be surprised to see Verstappen on pole position next weekend, with two flying Ferraris and two mighty Mercedes close behind him.

Mercedes with time to find

The defending Constructors’ champions have not been able to convert their innovative, lack of, sidepods into impressive pace in Sakhir as George Russell could only fifth place and was one second off the pace.

Mercedes may have completed the most laps in the second pre-season test, but they couldn’t find a solution to their handling issues.

Lewis Hamilton believes Mercedes are in a more difficult situation compared to 12 months ago.

“We have far bigger challenges this time, and they’re not one-week turnarounds,” said Hamilton.

“I think they’ll take a little bit longer but from what I’m told, we have a significant amount of pace to find.”

We’ve seen this before from Mercedes and it would be easy to think they will show up next week and have the car to beat.

However, there have been hardly any glimpses of performance from Hamilton and Russell all week to suggest that will happen.

If Mercedes were sandbagging, we wouldn’t see clear handling problems with the car because that doesn’t help the team gather the right data.

They will still be at the sharp end of the grid, but probably won’t be setting the pace because their porpoising problems have showed no sign of going away.

The W13 might have plenty of potential, it may just take a handful of events before we see it because the Mercedes is not dialled in.

McLaren on the backfoot

The biggest losers from the Bahrain test are McLaren, after a front axle issue with the brakes limited their running.

Lando Norris drove all three days due to Daniel Ricciardo‘s illness and subsequent positive coronavirus test, but it was another frustrating day for the team.

They hoped the issue could be fixed in time for the final day, but team principal Andreas Seidl says a real solution will only be available for the season-opener.

McLaren might have a fast car, but their have lost the chance to gain vital data and test the limits of the MCL36.

Particularly at the start of a new set of regulations, that will be a major setback for McLaren.

If you thought the top three teams were difficult to call, the midfield is even tougher as AlphaTauri, Aston Martin and Alpine could threaten McLaren next week at the Bahrain GP.

Aston Martin have gone under the radar, despite Sebastian Vettel and Lance Stroll seemingly gelling well with their 2022 machine.

Expectations were low for the team after an underwhelming 2021, but Aston Martin are in the hunt to be leading the midfield.

Questions marks remain over Alpine as Fernando Alonso pushed hard to finish the test in fourth, but his long run pace was pretty average compared to Pierre Gasly who conducted a race simulation in the morning.

The pecking order will almost certainly chop and change track by track, especially with big development rates this year.

The 2022 cars initially looked horrendous to drive in the slow speed corners due to the extra weight and bigger tyres this year.

Particularly at the hairpins of Turn 1, Turn 4 and Turn 10, every driver experienced huge understeer as the front of the car fails to sharply turn at the apex.

As expected, the clever engineers at each team began to work out how to solve this and which ever team can master the slower corners will have a big advantage.

It’s great to see the drivers hustling the cars around as the driver can now make even more of a difference.

They are much slower compared to 2021, but having the cars not on rails and moving around is nice to see because we’re so used to the cars being planted.

With closer wheel to wheel racing expected too, we could see fireworks when the lights go out next Sunday on March 20 for the Bahrain GP.