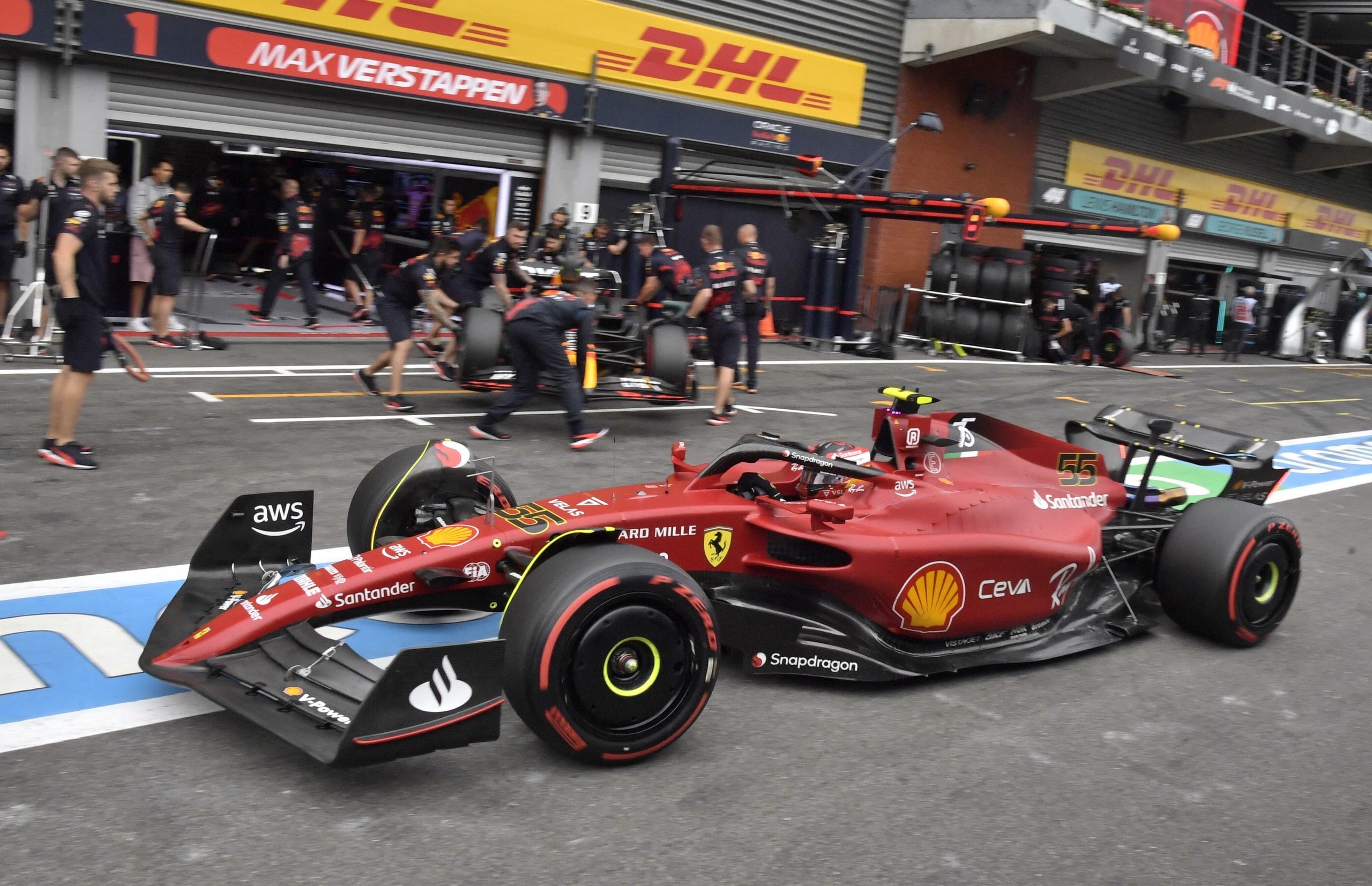 Carlos Sainz secured a net pole position for Ferrari at the 2022 Belgian GP despite reigning champion Max Verstappen setting the fastest time of the qualifying session.

Verstappen will start the grand prix from 15th after he, alongside championship rival Charles Leclerc, McLaren’s Lando Norris and Esteban Ocon for Alpine and a host of drivers were handed grid penalties for exceeding the permitted number of replacement engine parts.

Due to the penalties, Sainz was effectively battling Verstappen’s Red Bull teammate Sergio Perez for pole, and the Spaniard managed to just put his car at the front despite a scruffy final flying lap when he struggled with tyre temperatures and a tap of the new gravel traps.

Leclerc had pushed Verstappen for top spot throughout the qualifying session, but with the Dutchman’s pace looking unbeatable he was unable to challenge, and he will start the race tomorrow just behind the championship leader in 16th.

In yet another bizarre garage incident, Leclerc complained that Ferrari had put the wrong set of tyres on his car for his final flying lap, using a fresh set of soft rubber rather than used tyres as planned.

Despite qualifying in sixth on the day, Fernando Alonso will start the race on the second row from third as he benefited from a tow down the Kemmel Straight from his teammate Ocon.

Mercedes at a loss

Given their improved performance in the run up to the summer break, many had expected a significant leap forward from Mercedes at the Circuit de Spa-Francorchamps, traditionally a strong track for the team.

However, both Lewis Hamilton and George Russell struggled for pace throughout the practice sessions, and that form carried over into qualifying as the pair could only manage to put their cars in seventh and eighth, respectively.

The penalties mean that Hamilton will start the race alongside Alonso from fourth on the second grid with Russell in fifth for the 2022 Belgian GP.

Hamilton was 1.8 seconds off the fastest lap set by Verstappen at the top of the timing charts, and the seven-time champion appeared baffled by the gap on the radio to engineer Pete Bonnington at the end of the session.

Elsewhere on the grid, Alex Albon made it through to Q3 for the first time this season for Williams, meaning that all drivers have now managed to compete for a top 10 spot in 2022 qualifying sessions.

Albon’s and Williams’ straight line speed helped them to 9th on the timing charts, just ahead of Norris in 10th, and he will start the race from 6th on the grid.

Daniel Ricciardo once again failed to get his McLaren into Q3 as he could only manage 11th overall on the timing chart, but will start the race from 7th, ahead of AlphaTauri’s Pierre Gasly.

It was another tough outing for Aston Martin, with Sebastian Vettel agonisingly missing out on Q2 by just two thousandths of a second, while his teammate Lance Stroll was unable to capitalise on his promising practice performances and was knocked out in Q2.

However, with the host of grid penalties, Vettel was subsequently promoted to 10th overall for the race, with Stroll in 9th.