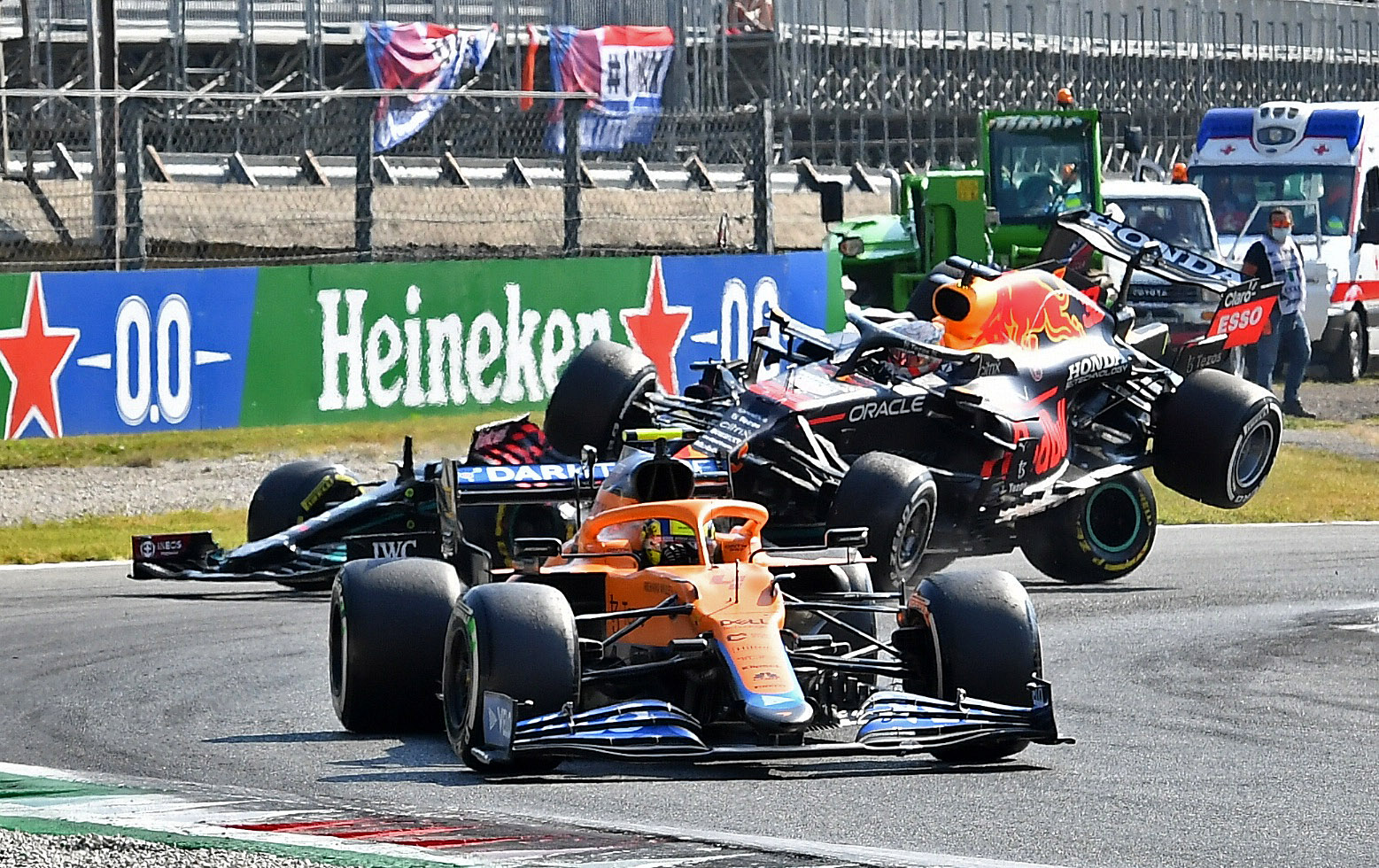 Australian driver Daniel Ricciardo won the 2021 Formula 1 Italian Grand Prix, his first win since 2018 and McLaren first win since 2012, after title protagonists Max Verstappen and Lewis Hamilton crashed into each other at the first corner.

Ricciardo, who so has so far had a torrid season, made a blistering getaway at the start taking the lead off Verstappen and only lost the lead briefly after the first round of pit stops in what was a lights to flag victory.

His teammate Lando Norris was second, meaning McLaren became the first team to finish one-two this year, with Mercedes Valtteri Bottas finishing third after Red Bull’s Sergio Perez was given a five-second time penalty for an illegal move on Ferrari’s Charles Leclerc who was fourth.

While Ricciardo finally broke McLaren’s nine-year winless streak, the incident between Hamilton and Verstappen is sure to garner the most amount attention. With Red Bull uncharacteristically botching Verstappen‘s pitstop and Hamilton suffering a relatively slow stop a lap later, the drivers made their way into Turn 1 side by side after Hamilton’s stop.

With the British driver holding the inside line, Verstappen refused to yield his position and ultimately was forced onto the sausage herb, which ultimately catapulted his car onto the top of Hamilton’s meaning both drivers were forced to retire from the Grand Prix.

The result leaves Verstappen leading the Drivers’ Championship from Hamilton by five points with eight rounds left to go.

Bottas storms through the field

After claiming the sprint race on Saturday, Finnish driver Bottas found himself starting from the back of the grid after Mercedes elected to replace several components on his power-unit.

Despite starting the race from 19th on the grid, the outgoing Mercedes driver stormed his way through the field, overtaking a host of cars to finish fourth on track, with the aforementioned penalty to Perez boosting him up to third.

Bottas‘ result means Mercedes extend their lead over Red Bull in the Constructors’ Championship with the Brackley-based outfit now 18 points ahead.

It’s been a journey to say the least since McLaren last won a Formula 1 race at the 2012 Brazilian Grand Prix. The Woking-based outfit have been on the rise since 2018 and after threatening the front runners on several occasions over the past few seasons, finally broke their duck at Monza.

What’s more it was Ricciardo rather than Norris who took the win, in what is sure to be a confidence booster for the Australian who is now an eight-time Grand Prix winner.

Norris’ second place means McLaren scored a one-two their first since 2010, in what was a historic day for the British racing team.

Good day for Ferrari and Williams

With Leclerc claiming fourth and Carlos Sainz finishing sixth, Ferrari ensured that they didn’t lose too much ground to McLaren in their battle for third in the Constructor’s Standings. The Italian team will feel that they could have, at a stretch, challenged for a podium, however, the 20 points they claimed today could prove pivotal come the end of the season.

Williams scored points yet again, with George Russell finishing the race in ninth. The Grove-based squad seem to have hit a purple patch after registering just one point in two years, they now have 22 in their last four races.

With second driver Nicholas Latifi, finishing just outside the points in 11th, it wouldn’t surprise anyone if the once perennial back markers added to their points haul before the end of the season.

The Italian Grand Prix was the latest exciting chapter in what has so far proved to be an enthralling season, with the accident between Verstappen and Hamilton adding to the drama and McLaren’s renaissance finally complete, the final eight races are sure to provide a fitting conclusion to what has been a truly pulsating season.