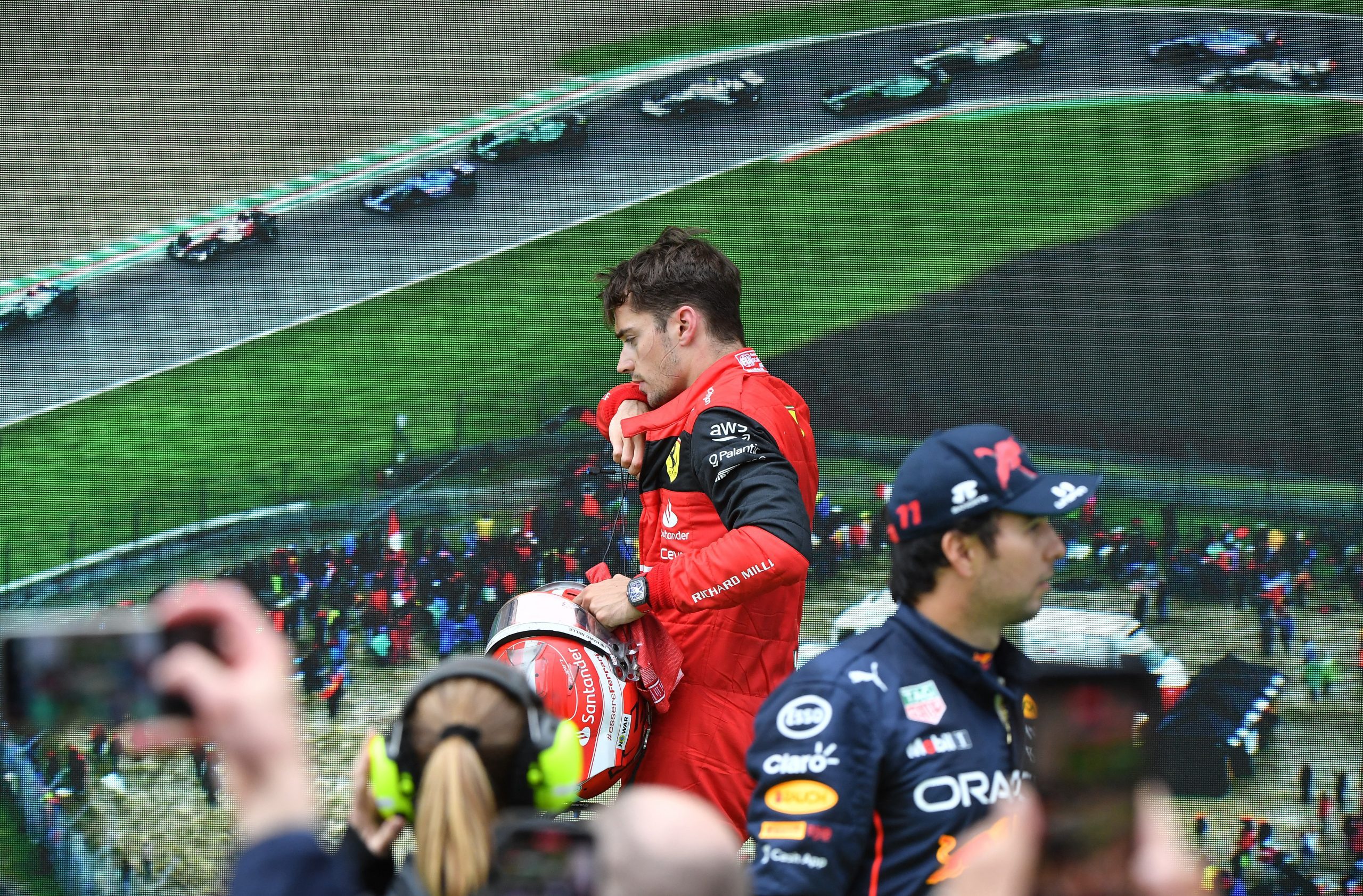 Max Verstappen needed to win after his retirement from the Australian Grand Prix, but to lead a Red Bull 1-2 is a big statement in this year’s title race. Red Bull‘s day got even better when Charles Leclerc made a costly mistake by spinning during the latter stages of the race, although he limited the damage to finish sixth.

There was huge joy for Lando Norris who, just like last year at Imola, finished third to underline McLaren‘s resurgence after a poor start to the season.

Norris crossed the line ahead of George Russell as Mercedes‘ woes continued with teammate Lewis Hamilton failing to score points in 13th place.

Verstappen puts a marker down

For the first time in 2022, Verstappen looked like a champion as he took a great pole position in the wet on Friday and made a sensational overtake on Leclerc at the end of the sprint race to start Sunday’s Grand Prix from the front.

It would have been so easy for Verstappen to overdrive and make a mistake, but he set the move up perfectly and got it done on the brakes to just about stay on the track.

A good launch in the race and with Perez slotting into second saw Verstappen cruise away to take a second career grand slam – pole position, fastest lap and lead every lap on his way to victory.

We shouldn’t forget it took Verstappen a few races in 2021 before he began his incredible run of form which lasted until Abu Dhabi. Don’t be surprised if his performance at the weekend marks the start of something similar this year.

Perez deserves lots of credit too because he usually doesn’t go too well in mixed conditions. Nevertheless, he bounced back from a poor qualifying on Friday and used his experience to keep Leclerc at bay in the Grand Prix.

Yes, DRS not being enabled helped Perez but he still had to hit his marks and have enough pace to make sure Leclerc stayed behind.

It’s too early to say if Red Bull have fixed their reliability issues, but they have responded in the perfect manner and Verstappen is getting a handle on the car.

Leclerc must iron out mistakes

A subdued Imola groaned as one when Leclerc took too much kerb into the first part of the Variante Chicane and spun into the wall. It was a silly error from Leclerc and he was fortunate to only damage his front wing.

Luckily, the championship leader was able to limit the damage and take sixth place so he still has a healthy 27-point advantage over Verstappen.

“Why I took risks, that’s a good question,” Leclerc told F1. “I’ll ask myself that when I am a bit more calm. I clearly made a mistake. I pushed too hard and the car reacted weirdly on the kerb but it’s not an excuse.

“I am angry at myself. I will look into it and learn from it. The Tifosi didn’t put pressure on me. I didn’t make any mistake this year but this one was a big mistake which could have been even worse for me.”

Leclerc is right, he’s driven perfectly this year and this is the first mistake he’s made. F1 is all about tiny margins and small errors can have big consequences, something Ferrari know all to well when Sebastian Vettel made mistake after mistake when fighting Hamilton for the championship in 2018.

Carlos Sainz also made a costly error at the weekend when he unnecessarily crashed in the second part of qualifying.

A nice recovery so Sainz start fourth, but he was turned around by Daniel Ricciardo on the opening lap at the first chicane. It was a racing incident, with neither driver predominantly to blame but for Sainz, it’s another kick in the teeth.

There’s no need to panic yet at Ferrari, but their lack of straight line speed will also be a concern because even when DRS was enabled in the race, Leclerc couldn’t get close enough to make an overtake on Perez.

Let’s see if this trend continues in Miami and Barcelona, where Sainz in particular needs some silverware to get his season back on track. It needs to come without desperate driving though.

McLaren back on the podium

McLaren rightly got a lot of backlash in the season-opening Bahrain GP for a dismal performance and it looked like that would set the tone for the rest of this season.

Despite better results in Saudi Arabia and Australia, Norris was adamant the team would drop back towards their Bahrain form due to the car’s slow speed handling. However, McLaren looked genuinely competitive all weekend and were able to unlock the potential of the car at Imola.

Norris says the simple answer to McLaren‘s great form at Imola was down to hard work in the factory and from the team at the track.

“An amazing race and amazing weekend and to be honest,” said Norris post-race. “To beat one Red Bull and one Ferrari is much better than we were expecting so I’m happy.

“The team deserve it. From nowhere in race one to now scoring a podium I think they all deserve it. So top job to the team.”

Even if the cooler conditions played into their hands, it shows that they have something to play with and McLaren know they can always rely on Norris to deliver.

Ricciardo missed out on a chance to score good points too, but he hasn’t been that far off Norris all year so he shouldn’t be too disheartened.

Valtteri Bottas must be loving his time at Alfa Romeo as he finished just six tenths of a second behind Russell in fifth place.

Bottas was up there throughout the event in all conditions and Alfa Romeo perhaps had the third fastest car in the race too which bodes very well for the team. Despite a slow pit stop, Bottas still managed his best result of the season.

“We delivered upgrades that worked well, a brilliant job by the team at home, and the crew were incredible both on Friday and Saturday night, with two rebuild jobs they undertook with strong spirit,” said team principal Frederic Vasseur.

“There are so many positives we can take away from this weekend, not just in terms of the result but also in the way we went about our business, and we can definitely aspire to do even better in the next few races.”

The Alfa Romeo is very nice on its tyres, the opposite characteristics of the Haas which was eating its tyres on Sunday.

Nevertheless, Haas‘ Kevin Magnussen did finish ninth although the team may have been hoping for more.

Haas‘ decision to start Magnussen and Mick Schumacher on the medium tyres in the sprint race backfired and the latter is still clearly not confident, perhaps feeling the effects from his Saudi Arabia qualifying crash.

Can Hamilton’s season get any worse?

Hamilton nearly failed to reach Q2 on Friday which told the full story of how his weekend unfolded.

The seven-time world champion made no progress in either the sprint race or the main Grand Prix with team principal Toto Wolff apologising to Hamilton for the terrible drivability of the W13.

Is Hamilton out of championship contention? He thinks so, but there were so many unusual circumstances at Imola with the rain and Hamilton being out of position that we didn’t get to see him run in clean air.

We shouldn’t completely rule Mercedes out of the title race yet, but alarm bells will be ringing at Brackley and Hamilton needs to at least match Russell, no matter how bad the car is.