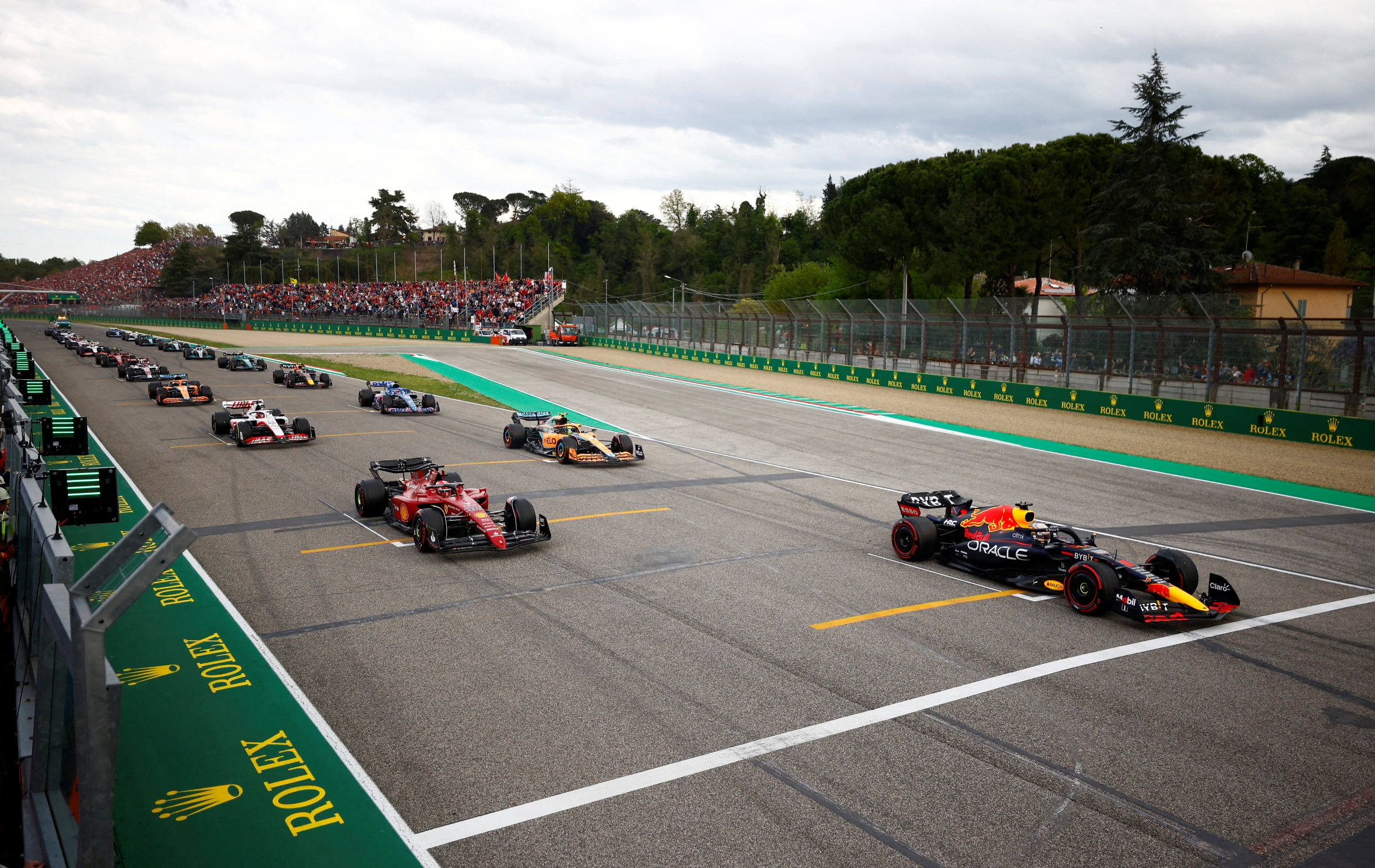 An enthralling Sprint Race at the Imola race circuit saw Red Bull’s Max Verstappen prevail over Ferrari’s Charles Leclerc in what proved to be an intense duel over the 21-lap race.

If the Sprint Race was anything to go by, then the tire strategies employed by the teams will play a pivotal role in determining the outcome of the 63-lap Grand Prix. It will be interesting to see if Red Bull can maintain their advantage over Ferrari given the Maranello team’s performance in 2022.

The Italian tyre company have brought their C2, C3, and C4 tire compounds to Imola and predict the best strategy would be one stopper with the drivers starting on the medium compound C3 tire before switching to the hard compound C4 tires for the remainder of the race.

A one-stopper would mitigate the time lost in the pitlane, with an estimated 30 seconds required for the drivers to enter, change tires and exit the pit lane.

Another option for the teams and drivers would be to start on the soft compound C3 tire before switching to the hard compound C4 tire around lap 18. This might compromise a driver’s performance towards the end of the race with tyre management playing a crucial role in executing this strategy.

“Imola is an old-school, challenging track, where overtaking can be tricky, also because the circuit is quite narrow in places,” Mario Isola Pirelli’s Motorsport Director said.

“So the strategy is likely to centre around avoiding traffic, and effectively the teams start from scratch here in terms of tyre knowledge – as the compounds are completely different this year, and last year’s race also began on the wet-weather tyres, before being interrupted by a lengthy red flag period. Generally speaking, Imola is a medium severity track for the tyres, and it’s a venue that is used quite frequently.

“This means that we might see a little less track evolution than we’ve been accustomed to at other circuits as the track is well rubbered-in already: the first round of the Pirelli-equipped GT World Challenge took place at Imola last month, which gave us some useful data. These are just some of the factors that the teams will have to take into account when establishing the tyre strategy for the opening sprint session of the year: another first for the 2022 season.”

Could rain affect the strategy?

The gloomy conditions around Imola could throw a spanner into the works with a wet-weather race nullifying the teams’ strategies. The 2021 Emilia Romagna Grand Prix, saw the drivers start in intermediate conditions before the rain hit the circuit towards the conclusion of the race, with Lewis Hamilton most notably being caught out.

It was will be interesting to see how the race unfolds with the Haas team, in particular, showing tremendous pace in wet conditions.

Other developments to look for include Mercedes’ fight back after a tough qualifying session and if Mick Schumacher can finally score his points in F1 with the German set to start the race in 10th.