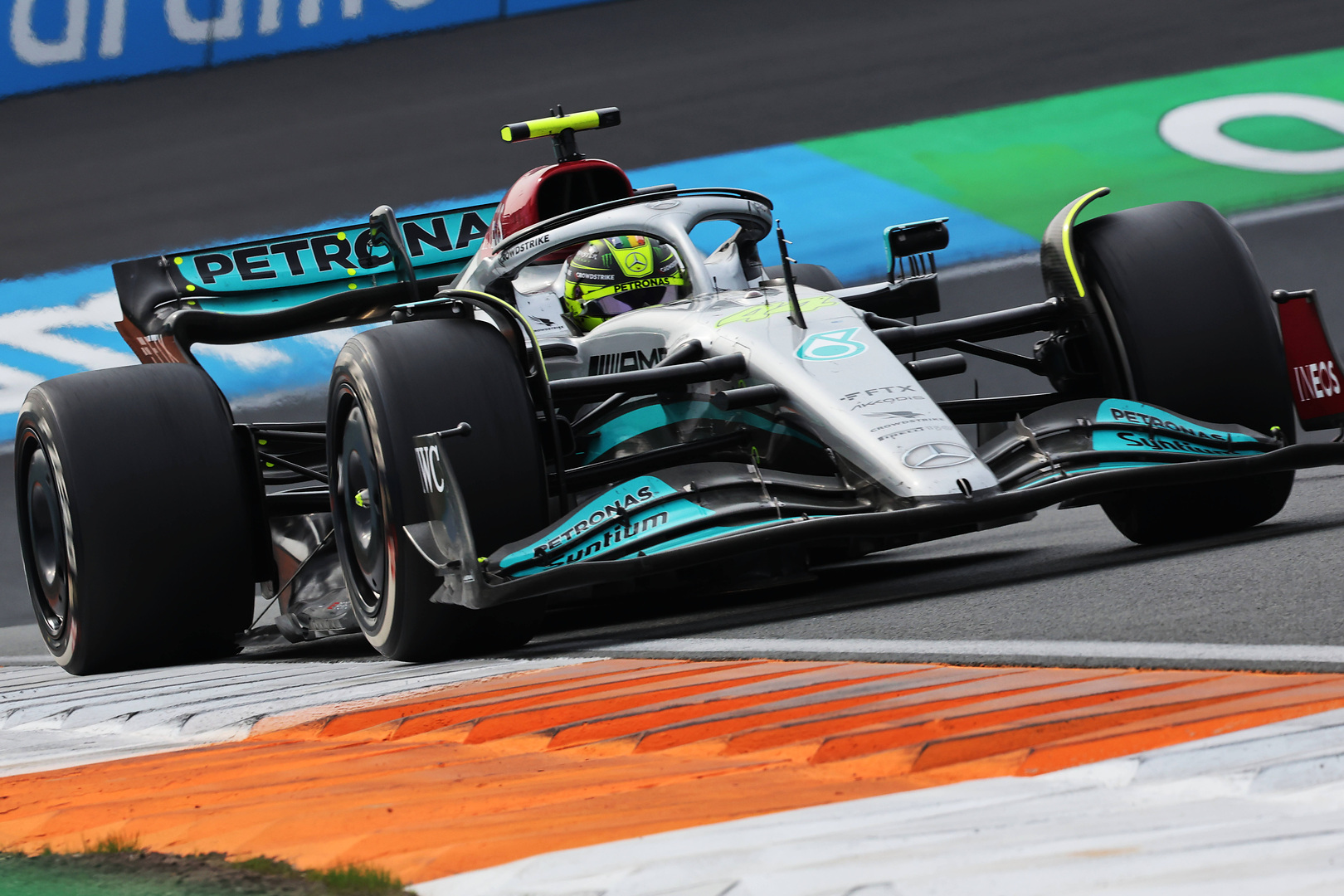 We were robbed of a big fight between Max Verstappen and Lewis Hamilton at the 2022 Dutch Grand Prix when Yuki Tsunoda came to a halt for a second time due to him driving with loose seatbelts.

Without this, Verstappen would have pitted for soft tyres with 15-20 laps to go, coming out around three seconds behind George Russell and eight seconds adrift of Hamilton. It’s a massive shame we didn’t get to see this pure fight play out.

Nevertheless, Valtteri Bottas‘ engine issue meant the race was back on and left everyone with a strategy dilemma – to pit or not pit.

Mercedes opted to not pit Hamilton whereas Russell asked for fresh soft rubber. We all saw what happened on the restart as Hamilton was a sitting duck, so what should Mercedes have done for the seven-time world champion?

A unique strategy call for Hamilton was missed

Verstappen pitted immediately for new tyres when the safety car was called, whilst the Mercedes duo went around for another lap.

The order was Hamilton, with the lapped car of Nicholas Latifi in between himself and Russell, with Verstappen fourth in the queue.

Normally, the safety car stays out on track but due to the positioning of Bottas‘ car, it went through the pit lane.

Had Mercedes pitted Hamilton, there is a good chance he would have still been in the lead.

Think about it. If Russell left a gap to Latifi, a maximum of 10 car lengths are allowed to the driver in front behind the safety car, Hamilton would have had plenty of time to make a pit stop and come out in front of his teammate and, crucially, Verstappen. Mercedes missed a trick here.

In this scenario, you don’t pit Russell so he can try and keep Verstappen behind for as long as he can, even if it’s just for a lap or two.

That would have given Hamilton time to scamper up the road on fresh soft tyres against Verstappen who would then be a few seconds behind, but with no tyre advantage, and in a car which was pretty equal to the pace of the Mercedes.

The win was definitely possible and Hamilton may have missed his best chance to maintain his streak of winning a race in every season he’s competed in since making his debut in 2007.

The timing of Russell‘s call to pit for some soft Pirelli rubber, because he was worried about tyre temperature on the restart, raised my eyebrows.

It was very late and meant Mercedes only had time to react to his call and get his tyres ready. Racing drivers only think about themselves and Russell showed this right here.

He knew what he was doing and knew Hamilton would be vulnerable, not only to Verstappen, but him as well so he could beat his team-mate.

Mercedes probably planned to not pit both drivers in order to give Hamilton a small chance to win the race, and only changed their mind because of Russell.

Hamilton was livid on the team radio when he realised the situation he was in as Verstappen went by: “That was the biggest f*** up. I can’t believe you guys f***** me man.”

It turns out, Hamilton was also in the wrong power mode on the restart which is why Verstappen breezed by. It wasn’t just Red Bull‘s superior straight line speed advantage.

The other mistake he made was going too early. His best bet would have been to drive slowly all the way to the finish line and then put the power down because Verstappen would unlikely have been able to get by on the short run between the finish line and Turn 1. A couple of errors from Hamilton there.

As for his frustration, it just shows how motivated and passionate Hamilton is about F1, even when he’s not fighting for the world championship – he won’t be leaving the sport anytime soon.

“Given how it played out after the final safety car and dropping back, I was just on the edge of breaking point with emotions and my apologies to the team because I don’t even remember what I said over radio, I just lost it for a second,” said Hamilton post-race.

“But I think they know that there is just so much passion and I want to look at today as a glass half full – we came here struggling from the last race and we were fighting against the Red Bulls, we were quicker than most at many points.

“Without the safety car I think we’d have been challenging them for the win at the end on the one-stop which I don’t think the others could do. So many great things to take from this weekend – the car was finally working.

Hats off to Red Bull

Amid all of this drama, you have to tip, or doff, your cap to Red Bull and their strategy team once again.

Hannah Schmitz has made some brilliant strategic calls for over a decade, since becoming the team’s Senior Strategy Engineer in 2011. Red Bull are the benchmark operationally in F1 and have been for some time.

Whenever there is a safety car, it’s incredibly bold and brave to pit the driver in the lead, knowing they will lose track position.

Red Bull did this with Verstappen at the 2019 Brazilian GP, where it worked wonders, and it paid off again at Zandvoort on Sunday. It takes guts and huge trust between the driver and pit wall to pull this move off, which is exactly what Red Bull have with Verstappen.

This is what Ferrari didn’t do with Charles Leclerc at the British GP this year and it was very costly.

Strategically, Mercedes missed a trick due to the rare occasion of a safety car taking the field through the pit lane and they may have let their one and only chance to stand on the top step of the podium in 2022 slip away.