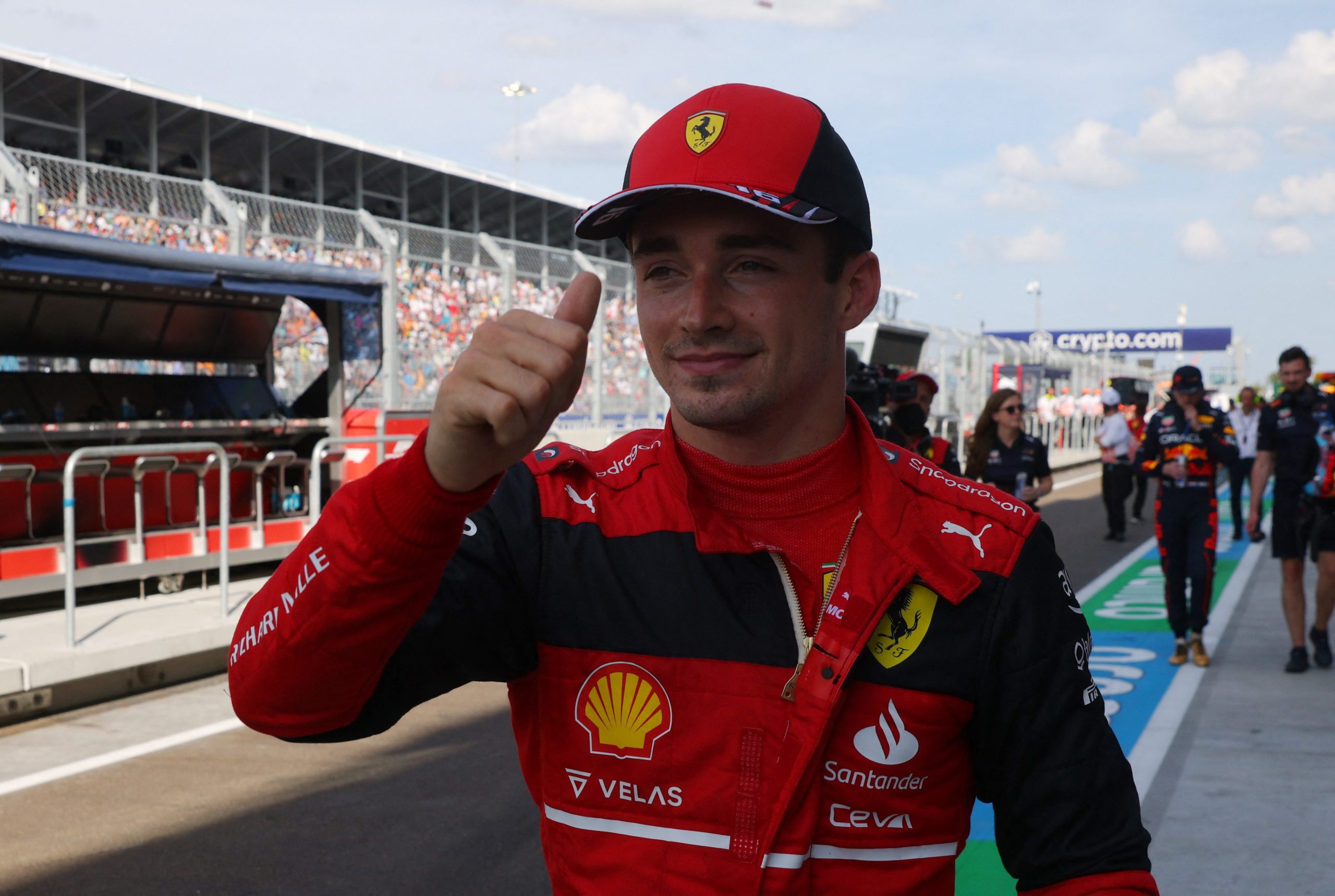 It’s an all-Ferrari front row for Sunday’s inaugural 2022 Miami Grand Prix, with Charles Leclerc claiming his fourth pole position of the 2022 F1 season, thanks to a brilliant lap at the death.

The battle for first was down to the two Scuderia drivers as time ticked down, Carlos Sainz initially setting the fastest first sector. However, Leclerc battled back in sector two, eventually crossing the line with a 1:28.796.

Sainz had to settle for second, 0.190s back of his teammate, to give Ferrari their first front-row lockout since the 2019 Mexico Grand Prix. It’s also a return to form for the Spaniard after disappointing showings in Australia and Imola that ended in DNFs.

As for Max Verstappen, the Red Bull driver set the pace early on, cracking the 1:28 barrier to put him ahead of the two Ferraris and teammate Sergio Perez. Unfortunately for Verstappen, he was forced to abort his final lap, meaning he’ll start third ahead of Perez.

Valtteri Bottas continued his impressive campaign for Alfa Romeo, ending the day with the fifth fastest time ahead of Lewis Hamilton.

Pierre Gasly, Lando Norris, Yuki Tsunoda and Lance Stroll round out the top 10.

Things looked to be on the up for Mercedes after a strong showing in FP2, but unfortunately for George Russell, that pace didn’t carry over to Saturday.

The Brit’s frustration was audible when he radioed his team after aborting his first flying lap. “****, the bouncing,” Russell cried as replays showed his W13 porpoising around the Miami International Autodrome.

Perhaps that effort would have improved Russell‘s afternoon, as the Mercedes driver was shockingly dumped out of Q2 with the 12th fastest time.

Joining him was Sebastian Vettel. The Aston Martin driver looked to be safe after his final lap moved him up all the way to eighth, however strong laps from Stroll, Norris and Tsunoda saw the German fall all the way down to 13th.

Vettel later admitted over the radio that a mistake in the chicane ultimately cost him a shot at Q3.

Fernando Alonso wasn’t happy after stating he was impeded by Carlos Sainz, resulting in him ending Q2 in 11th. Meanwhile, Daniel Ricciardo looked to be on his way to a strong lap time after some downshift issues earlier in the session.

However after getting just one chance at a lap time, the McLaren driver could do no better than 14th, one spot ahead of Mick Schumacher.

Ocon misses out on qualifying

Esteban Ocon will start Sunday’s race from the back of the grid after failing to take part in qualifying.

The Alpine driver crashed into the barriers during FP3, which generated enough G’s that a medical check up was needed. Although he was cleared to compete, a crack in the chassis ruled him out of the session.

Kevin Magnussen had looked quick all weekend, however he failed to make it count when it mattered most, meaning the Haas driver will start down in 16th.

Zhou Guanyu‘s attempts to make it out of Q1 were ended when he encountered traffic during his final hot lap, forcing the Chinese driver to abort his attempt and settle for 17th on the grid.

It was a session forget for the Williams pair of Alex Albon and Nicholas Latifi as well, with the duo ending the session as the slowest cars on track in P18 and P19.