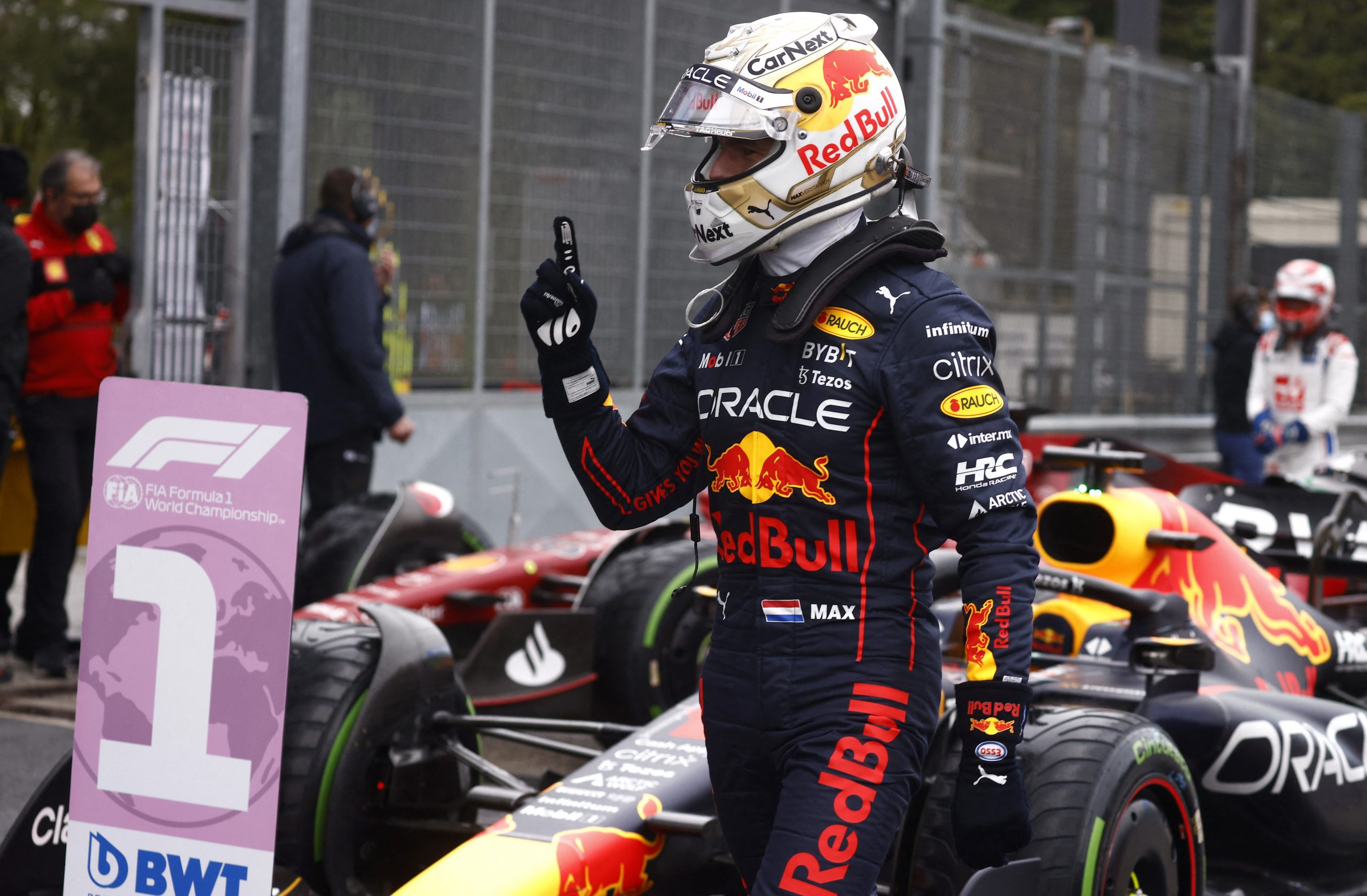 Max Verstappen will start the first sprint race of the 2022 Formula 1 season on pole position for the Emilia Romagna GP weekend at Imola after a heavily disrupted and wet Friday qualifying session.

The running out on track was interrupted by five red flags, with drivers and teams struggling for grip in changeable weather conditions, and disappointing outings for multiple teams and drivers, notably Carlos Sainz and the two Mercedes.

The track had dried up significantly since the first practice session, when all the drivers had struggled for grip even on the wet tyres with multiple cars finding their way into the gravel and the session red flagged after Lando Norris spun off.

Even though the circuit remained damp in parts for qualifying, it had sufficiently dried up to allow the cars to run slick tyres in Q1, but the rain began to fall once more as the cars went back out on track for Q2 and again in Q3.

It had looked like Verstappen and the Ferrari of Charles Leclerc would get one final shot at pole after Valtteri Bottas in an Alfa Romeo that once more looked competitive in the top 10 spun off into the wall, bringing Q3 to a halt under red flags for a second time with just under three minutes to go.

But on the out lap to restart the session, Norris lost his McLaren at the same spot that had caught out several drivers throughout the session, and that brought out yet another red flag and an abrupt end to a chaotic session.

The reigning world champion thus secured the first pole position for him and Red Bull in 2022, even if it is only for the sprint race that will determine the starting grid for the Grand Prix on Sunday.

Despite his crash, Norris’ performance was good enough for third on the grid, with his teammate Daniel Ricciardo back in sixth just behind the Alpine of Fernando Alonso.

Haas had looked impressive throughout the first two qualifying sessions, with Mick Schumacher up in 12th and Kevin Magnussen seemingly able to compete for the second or third row of the grid.

But the red flags came out once more in Q3 after Magnussen went into the gravel and tapped the wall, though the Dane managed to extricate himself and continue back to the pit lane under his own steam and end up fourth on the grid.

The second Red Bull of Sergio Perez was back in seventh, ahead of Bottas in eighth and Sebastian Vettel finally catching a break in 2022 after a nightmare outing for Aston Martin in Melbourne in ninth, with Sainz rounding out the top 10.

Sainz comes down to earth

Carlos Sainz had started the weekend on a high after signing a two-year contract extension with Ferrari which will take his stint with the team through to at least 2024, and the Spaniard had looked on for a strong result to make up for a disappointing weekend last time out in Australia.

However, the positive vibes evaporated swiftly after Sainz lost the backend of the car on the exit of Rivazza 2, sending it into the wall and ending his chances of pole position for tomorrow’s sprint race.

The error was one that he could have done without after a string of disappointments in the first few races of the season, with the success of teammate Leclerc putting the results into stark contrast with the Spaniard back in 10th on the grid tomorrow.

Sainz wasn’t the only one left wondering what might have been, with Mercedes once again some way off the pace of the leaders and Sir Lewis Hamilton and George Russell going out in Q2 in 11th and 13th respectively.

Hamilton had come on the radio after only just making it through Q1 to complain about how difficult it was to drive the car, and the reigning constructors’ champions face a steep climb back to the top.

In an interview in the paddock, the seven-time champion said that Mercedes had “underperformed as a team” and declined to comment on pictures of him and team principal Toto Wolff in a frank exchange in the garage after the session.

There was disappointment for AlphaTauri at the team’s home race, with both Yuki Tsunoda and Pierre Gasly out in Q1 in 16th and 17th respectively.

Alex Albon will for the second consecutive race start from the back of the grid after his rear right brakes caught fire during Q1, with the Williams spraying debris across the track as the car was nursed back to the pitlane without setting a time.

The incident brought out the red flags, and the British-Thai driver will be forced to repeat his heroic performance in Melbourne during the sprint if he is to take anything away.

Meanwhile Albon’s teammate Nicholas Latifi had another spin on an out lap during Q1, and failed again to get out of the first session meaning, both Williams cars will start from the back for the sprint race tomorrow with the Canadian in 18th.

Esteban Ocon came into the pits with an issue towards the end of the first session while in the elimination zone, and so was unable to challenge for a place in Q2 and will start the sprint race from 19th.