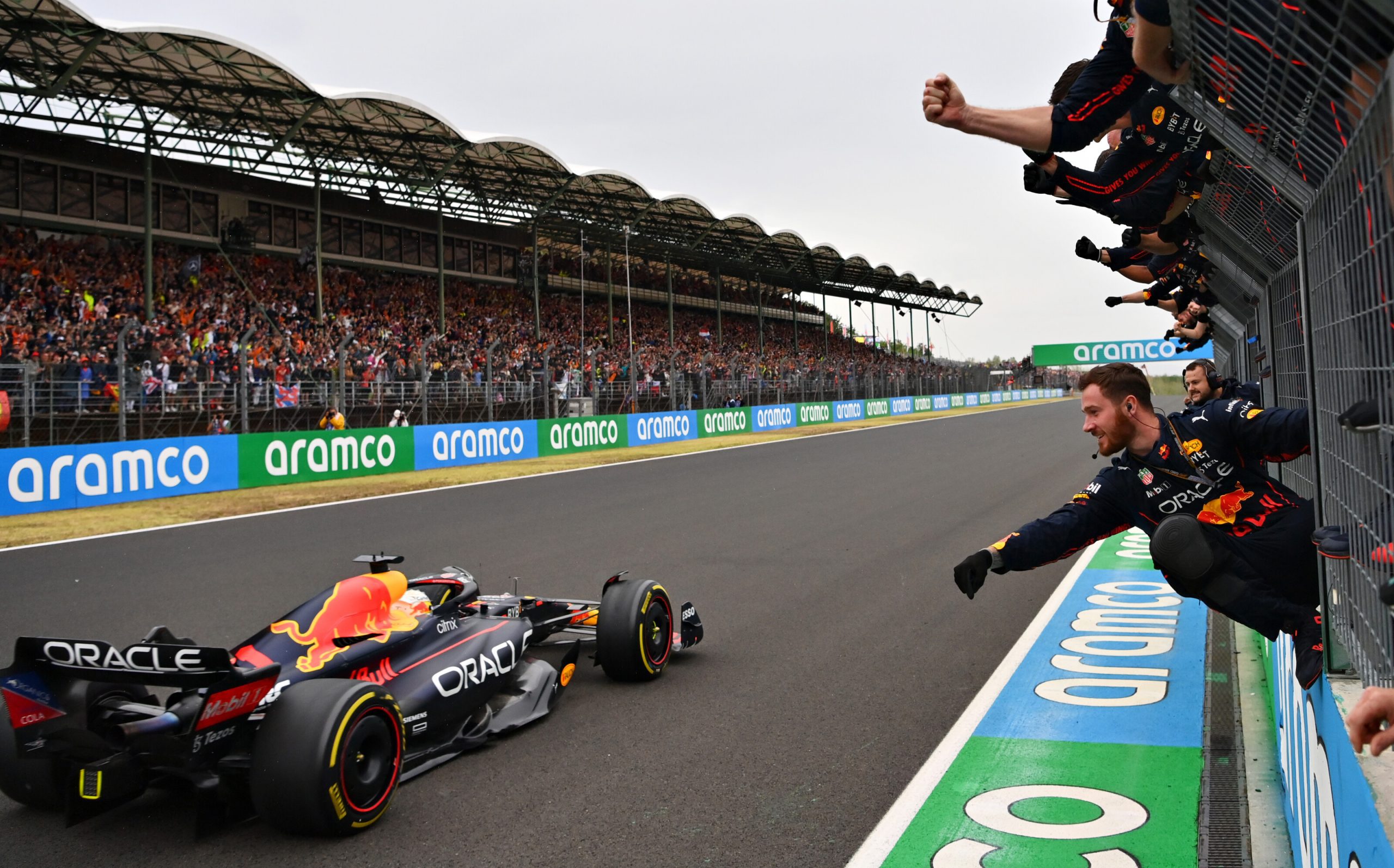 It takes more than being quick to succeed in Formula 1, as Ferrari have found out time and time again over the 2022 season. The Hungarian Grand Prix was the latest chapter in a sad tale that looks all but certain to rob us of an epic title fight.

Starting second and third to Red Bull‘s 10th and 11th, Ferrari were primed to make inroads into their championship deficits; instead they left Budapest further in arrears.

However, to credit the final race result purely to the Scuderia’s errors is to do a disservice to the protagonists who dazzled at the Hungaroring.

In particular, Max Verstappen and Lewis Hamilton reminded us why it took a decision that contravened the rules to separate them last season, as the two delivered near-faultless performances.

The Dutchman took top spot and Mercedes bagged a second consecutive double podium, while elsewhere Lando Norris continued his strong run of form and Sebastian Vettel took the final point on offer in his first race since announcing this would be his last season in F1.

It was the final race before the F1 gang disbands for summer and it was action-packed, so let’s delve a little deeper into what was an enthralling Hungarian GP.

The famous Italian marque have become specialists at snatching defeat from the jaws of victory this season. Having finally designed a car capable of challenging for a first title since 2007, even the most ardent supporter would admit their chances of fulfilling that potential have all but evaporated.

In Hungary, Charles Leclerc was quicker than his teammate Carlos Sainz and jumped the Spaniard after the first round of pit stops before hunting down and passing pole-sitter George Russell for the lead.

At that point, the Monegasque looked odds-on to take the chequered flag as he displayed solid pace on his second medium-tyre stint. Behind, Verstappen made an early final stop on Lap 39 in a bid to undercut his rival. And it worked.

Rather than stick to their guns while there was plenty of life left in Leclerc‘s rubber, Ferrari took the bait, strapped on a set of the unfancied hards, and left their lead henchman a sitting duck to those behind.

Such was the drop-off in performance that he was switched onto a three-stop strategy. Alas, the damage was already done. From potential victory to sixth.

“We need to speak with the team and understand the thought behind putting the hard tyre on because I felt very strong on the medium,” a frustrated Leclerc said. “Everything was under control.

“I said on the radio that I was very comfortable with the medium and that I wanted to go as long as possible with those because the feeling was good, but I don’t know why we took a different decision.”

Faced with another big call, Ferrari once again got it wrong. It’s been a theme of this season and one they’ll be desperate to address when racing resumes in Spa.

The truth is, even Ferrari‘s best efforts might have been in vein, as Verstappen scythed through the pack from 10th on the grid. Red Bull Team Principal Christian Horner admitted afterwards that a last-minute strategy call to start on the softs played a major role in their success, but the Dutchman still had to execute.

Dispatching Sergio Perez with a clinical move into Turn 6 was crucial before the team used the undercut to devastating effect to jump Hamilton at the first round of stops and George Russell at the second, before overtaking Leclerc twice and cruising to the line.

A rogue spin on Lap 41 was the only wheel Verstappen put out of place at the Hungaroring as he extended his title advantage to what is now a surely unassailable 80 points.

“I was of course hoping I would get close to the podium, but it was very tricky conditions out there but we had a really good strategy, we were really reactive, always pitting at the right time,” Verstappen said after the race.

“I think we had some good outlaps and even with the 360 (spin) we still won the race.”

In the sister RB18, Perez finished an underwhelming fifth but that was good enough to help Red Bull increase their lead in the Constructors’ Championship to 97 points.

Hamilton still a force to be reckoned with

If there were any concerns about Hamilton‘s continued ability to compete or his motivation to carry on in F1, they have surely now been laid to rest. A DRS failure in qualifying denied us what could have been an unfathomable ninth pole in Hungary, but the 37-year-old more than made amends come race day.

A good launch and a pair of squabbling Alpines paved the way for him to make up two places in Turn 1 before he eventually prevailed in his battle for fourth with the McLaren of Norris.

Most would have been forgiven for thinking that might have been as good as it would get but a mega second stint on the medium tyres set up a grandstand finish on the softs that saw Hamilton light up the timesheets and pass Sainz and then Russell to make it back-to-back second-place finishes and five consecutive podiums.

Now that Mercedes have a better understanding of the temperamental W13 and Hamilton is no longer in experimental mode, only Verstappen in his superior challenger has scored more points in the last eight races than the Briton.

The latest of which was a vintage display of the seven-time world champion’s renowned ability to manage tyres, and a timely reminder of his raw speed that all too often gets taken for granted.

“If we’d got our lap yesterday we’d have been on the front row and maybe today would’ve been a different result but nonetheless I got a good start to be able to make me way through and that last stint was pretty special,” Hamilton said.

“I honestly think in a straight-out race we might not be that far behind Max, so I’m really excited about the second half of the season.”

On the face of it, the Hungarian GP was fairly positive for Alpine. Starting fifth and sixth became finishing eighth and ninth as the faster cars that were out of position at lights out came roaring past.

Could it have been better? Probably not in terms of points, but the manner of the result could have wider implications.

Off the line, Esteban Ocon only had eyes for Fernando Alonso, employing a defence so aggressive the Spaniard said he had never seen anything like it in his F1 career. Given how instrumental the 40-year-old was in protecting Ocon en route to his maiden victory here 12 months ago, it was definitely on the limit.

Alonso eventually claimed bragging rights as both did their best to make a one-stop strategy work, but it would have been interesting to see if he could have challenged Norris 11 seconds up the road had he been released sooner.

With Alpine and McLaren locked in a battle for fourth, these are the margins that can prove decisive.

Coincidentally, perhaps, it has now been announced that Alonso will leave the team at the end of this season and join Aston Martin on a multi-year deal. While he is undeniably in the twilight of his career, that will be a blow to the French outfit.

Seb starts his farewell tour in the points

Probably the feel-good story of Sunday was Vettel‘s comeback to finish in the points on his first start since announcing this would be his last season in Formula 1.

The German was in combative mode in Budapest and but for a late Virtual Safety Car, believes he would have snatched ninth in the dying embers from Ocon.

Whatever the case, it was a fitting way to mark the occasion as the four-time world champion turned in a performance to prove he won’t be content simply to make up the numbers on his farewell tour.

He once again had the measure of Lance Stroll and pulled off a late move on his Aston Martin teammate to clinch 10th and take the final point on offer.

Formula 1 now heads into a four-week summer break and will return at the iconic Spa-Francorchamps for the 2022 Belgian Grand Prix on August 28. You can follow all the action as it happens on Total Motorsport.