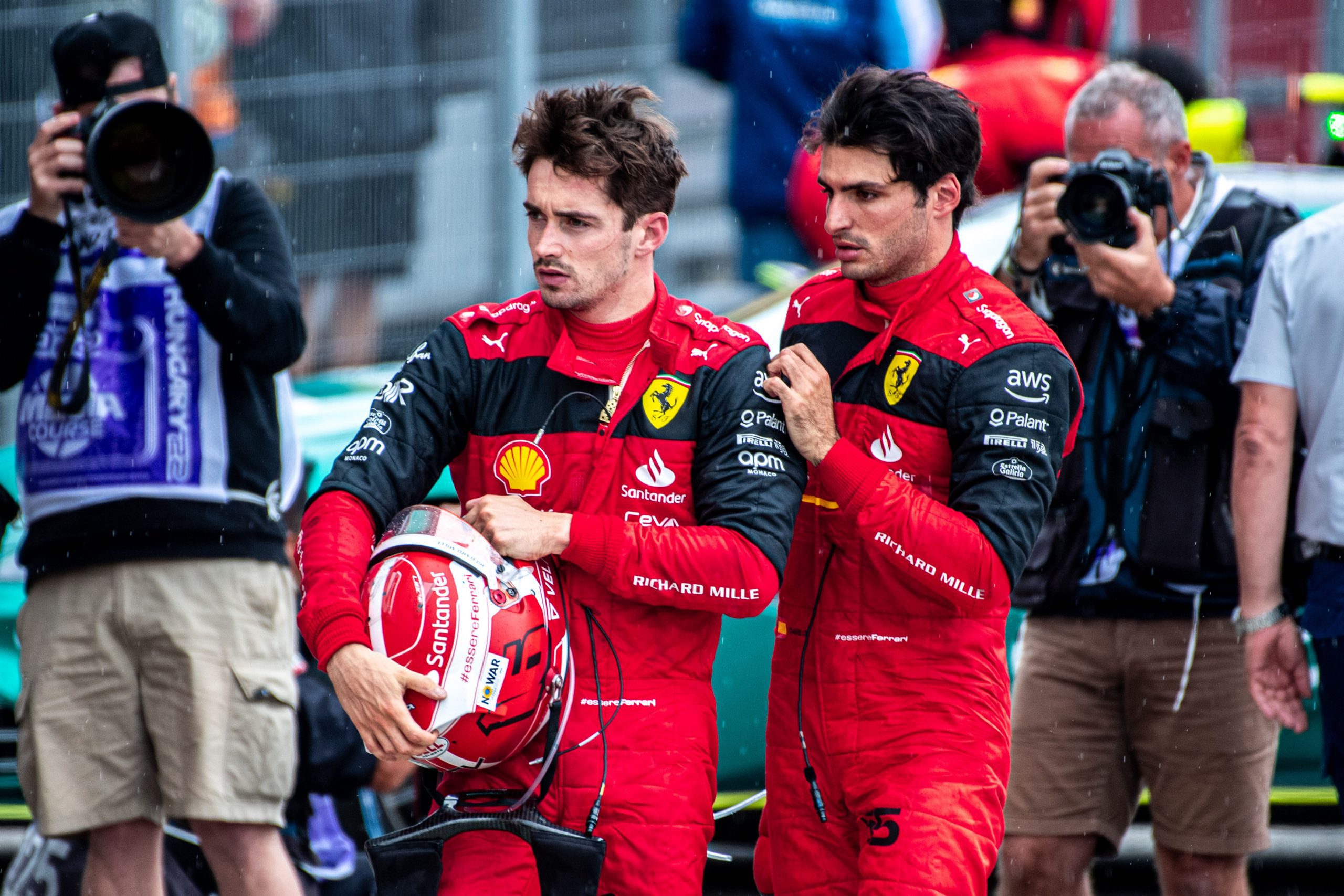 Ferrari have had an incredibly frustrating Formula 1 2022 season so far, throwing away certain podiums and victories due to mistakes from the team and driver.

Going into the final nine rounds Charles Leclerc trails Max Verstappen by 80 points in the F1 driver standings, whilst Ferrari are 97 points behind Red Bull in the constructors’ championship.

Ferrari have had the fastest car at the majority of the 13 races so it’s very poor that they are, not only not leading either championship, but are so far behind.

This title race should be just as close as last year’s phenomenal battle between Verstappen and Lewis Hamilton. Instead, it might soon be game over because Ferrari have dropped points that total up to three figures.

The first two Grand Prix were excellent for Ferrari as they had a 1-2 in the Bahrain season-opener and another double podium in Saudi Arabia.

But, Carlos Sainz‘s mistake in qualifying for the Australian GP saw him start down in ninth, although he was also unlucky that Fernando Alonso caused a red flag which stopped him from setting a faster lap time.

Nevertheless, Sainz could still have scored big points in Melbourne, a podium was still possible. However, he got too desperate on Lap 2 when overtaking Mick Schumacher at the fast Turn 10-11 chicane, spinning and beaching his car in the gravel.

Both drivers make mistakes in Imola

It was almost a repeat weekend for Sainz in Imola as he made a mistake during a wet qualifying by spinning and crashing at Turn 18, so started in 10th for the sprint race.

In the main Grand Prix, Sainz was rear-ended by Daniel Ricciardo so this was a matter of misfortune rather than a mistake. You could make the argument his average start put him in that position if you’re being harsh.

As for Leclerc, he didn’t quite have the pace to match Red Bull and was set to finish in third. However, he wanted more so pushed hard in a bid to attack Sergio Perez, only to spin at the Variante Chicane.

Luckily, Leclerc‘s car wasn’t badly damaged and he made a pit stop to recover and finish in sixth.

Miami was a clean weekend for Ferrari, but it wasn’t long before more problems came about. This time, it marked the start of a streak of mistakes and issues that have lasted up until the most recent Grand Prix in Hungary.

Sainz‘s poor start was compounded by a spin in the early stages of the race at Turn 4 which dropped him to 11th. He somewhat limited the damage by finishing fourth, and may have been compromised by damage from his trip through the gravel.

Meanwhile, Leclerc had a built a lead of over 10 seconds to the rest of the field as Verstappen, who made a mistake himself, was fighting with Russell and Perez.

But, on Lap 27, Leclerc‘s turbo and MGU-H failed forcing him to retire thus losing a guaranteed win.

Verstappen was 46 points behind Leclerc after Round 3, three races later and the Dutchman was in the lead of the championship – a lead he hasn’t relinquished since.

Pole position in Monaco equates to a win, right? Not if you’re Leclerc in 2022 as he didn’t even finish on the podium thanks to a baffling strategy call from Ferrari.

A wet race saw Red Bull bravely pit Perez from third place onto the intermediates on Lap 16, meaning Ferrari had to respond with Leclerc immediately on the next lap or carry on and wait to switch to the dry tyres.

Instead, they pitted Leclerc on Lap 18 when it was clear Perez had undercut him so it was simply a strange move.

To add salt to the wounds, Ferrari accidentally double stacked their drivers so Leclerc lost a crucial second or two by having to wait for Sainz. This precious time cost him a position to Verstappen, who overcut his championship rival by going one lap longer on the intermediates.

As the track dried out and you can’t overtake in Monaco, the order after the pit stops of Perez, Sainz, Verstappen and Leclerc remained. This was only the beginning of some big strategy errors.

Double DNF in Azerbaijan and grid penalties in Canada

Reliability quite clearly became a massive issue for Ferrari at the Azerbaijan GP. Sainz puled over after eight laps due to a hydraulics problem, before Leclerc‘s chances of victory, which would have been a close-fought battle with Verstappen, blew up in smoke on Lap 21.

This meant Leclerc took his first grid penalty of 2022 for exceeding the number of allocated power unit elements at the next race in Canada. Who knows if a win was possible there, because his strategy and approach to the weekend would have been completely different, but a podium definitely was.

Ferrari won with Sainz taking his maiden F1 victory at Silverstone so they should have been delighted, well not quite.

A 1-2 was on the cards after Verstappen got a piece of debris stuck in his car, but a late-race safety car for Esteban Ocon‘s broken down Alpine gave Ferrari a dilemma, one they got badly wrong.

Leclerc was leading the race and the team opted not to pit him for fresh rubber whilst everyone else behind him did, including Sainz.

To no surprise, he was a sitting duck on the restart and was overtaken by teammate Sainz, Hamilton and Perez.

Engine failure at the Austrian GP

Another Ferrari 1-2 was on the cards at the Red Bull Ring, with Sainz set to overtake Verstappen late on until, bang, his engine failed.

Leclerc took a great win, whilst Sainz watched on during the final laps as his Ferrari burned at Turn 4.

This meant it was Sainz‘s turn to take a big grid penalty at the next race in France, although he recovered to fifth, albeit with another crazy strategy.

We were treated to a thrilling battle in the opening 18 laps of the French GP between Verstappen and Leclerc, until the latter made a costly mistake.

Leclerc lost control of the rear of his car at Le Beausset which was a driver error, nothing to do with the throttle which you heard about on the team radio. That was a discussion with his engineer regarding reversing the car out of the barrier which he was unable to do.

Sainz had a great recovery drive to fifth, but could it have been a podium? Potentially.

The Spaniard was racing with Perez for third place when he got the call to pit for fresh rubber because he was on the medium tyres which may have struggled to make the end of the race.

But, he overtook Perez but then pitted anyway so had to settle for fifth. Looking back, Ferrari may have made the right decision although Sainz would have been in contention for first or second had he not started at the back.

A new low in Hungary

If you think things couldn’t get any worse for Ferrari, they somehow managed to throw away another potential win with Leclerc last time out at the Hungarian GP.

With Verstappen starting in 10th, it provided the perfect opportunity for Leclerc to begin a much-needed comeback.

The hard tyres were clearly a handful, as they had been in Friday practice too, so the natural strategy would be to avoid using them at all costs. Ferrari thought otherwise.

Leclerc pitted for the hard tyres with 31 laps to go and was unable to keep a charging Verstappen at bay, even with the Red Bull driver having to overtake him twice due to a spin.

Sainz was strangely off the pace throughout the race, despite not having a poor strategy so the Ferrari drivers finished in fourth and sixth. Heads must have been slamming hard at Maranello.

How many points have Ferrari dropped in F1 2022?

The numbers above are rough estimates, so you can give or take some points here or there. Whatever your calculations are, Ferrari have completely thrown away this year’s championship

To win in any sport over a season, you must maximise your opportunities more often than not.

You cannot afford reliability problems and strategy mistakes must be kept to a minimum. Ferrari have done neither of these things and something has to change.

What could have the F1 championship standings have looked like?

In an imaginary world where Ferrari and Red Bull had no reliability issues at all and generally made the right strategy decisions, Ferrari would be leading both championships.

We would also be in for a thrilling final part of the season.