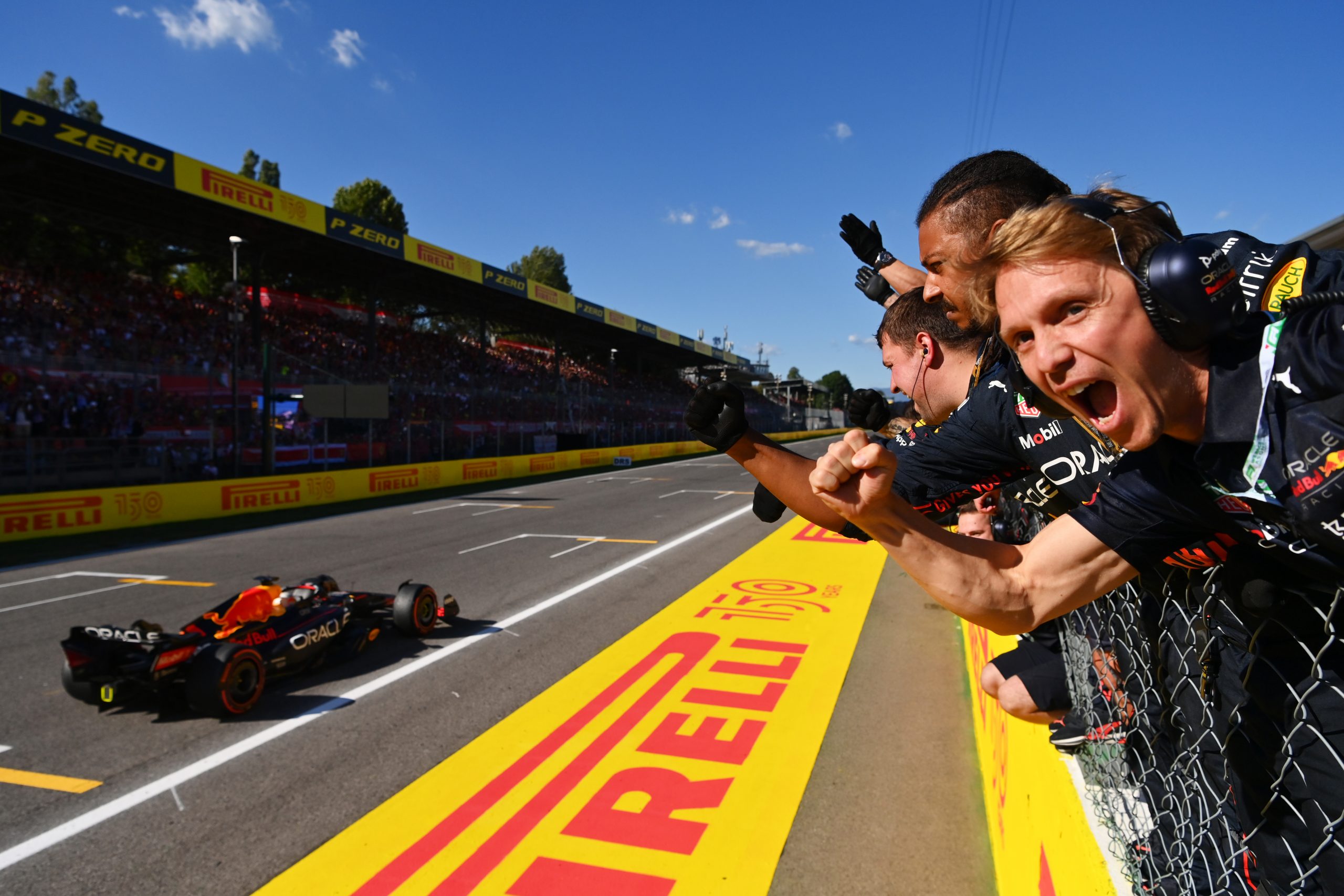 Red Bull and Max Verstappen continued their scintillating run of form at Monza, making it five wins in a row courtesy of an impressive comeback victory at the Italian Grand Prix.

The Dutchman looks unbeatable and put on another masterclass to deny Charles Leclerc and Ferrari in front of their adoring and passionate Tifosi.

Ironically, he took the chequered flag at the Temple of Speed behind the safety car as the race finished with a whimper, but there’s no denying he was the worthy winner as he closes in on a second consecutive drivers’ championship crown.

Trigger-happy Ferrari architects of their own downfall

There were six cars between pole-sitter Leclerc and Verstappen at lights out as a result of the Dutchman’s grid penalty, leading to renewed optimism the Monegasque could clinch a first race win since Austria.

However, Verstappen made extremely light work of those in front and arrived on the gearbox of his rival after breezing past the Mercedes of George Russell on Lap 5. But this was a more competitive Ferrari package than was on show at Spa and Zandvoort.

Leclerc was able to withstand the advances of the championship leader and keep him out of DRS range, until the key moment arrived on Lap 12.

As has been the way of things, when the team should stick, they twist, and vice versa. When Sebastian Vettel’s Aston Martin broke down and triggered the virtual safety car, the decision was taken to pit, and it backfired.

To make matters worse, the VSC period ended while Leclerc was still in the pits, meaning he gained less time than expected, while the early stop left him the daunting task of completing 40 laps on the medium tyres.

By contrast, Verstappen was able to extend his opening stint on the soft tyres, boxing at the end of Lap 25 and quickly eating into Leclerc’s lead. The call under the VSC was to do the opposite to the leader, and once again the chips fell in favour of Red Bull.

Whether it would have made a difference to the outcome is now a moot point, of course, but in the early stages at least, a Ferrari win looked a definite possibility.

Alas, as Leclerc struggled on his old mediums and with little prospect of hanging onto top spot, he was switched onto a two-stop strategy that put paid to his realistic hopes. The late safety car had the potential to set up a one- or two-lap shootout but it didn’t happen, leaving Leclerc to cut an understandably dejected figure in parc ferme.

“Starting from pole I wanted to get that win and we didn’t,” Leclerc said. “So it’s not the best day, but the podium makes it a lot better.

“The first choice was to stop under the virtual safety car. I think we all had doubts but if I wouldn’t have done it, Max would have done it.

“It was a bit unfortunate because in the middle of the pit lane, we had the virtual safety car ending, so we didn’t get all the benefit of stopping at that moment. From that moment on we were a little bit on the back foot.”

After what were effectively two home races for the Belgian-born Verstappen who drives under the Dutch flag, he was greeted by a chorus of boos at the end of the Italian GP.

It’s understandable, of course, given he has been a constant thorn in Ferrari‘s side this season, but the runaway championship leader appeared unmoved in the immediate aftermath.

“The atmosphere, for me, was not amazing,” Verstappen said. “But it is what it is.

“When it happens, of course, everyone speaks to me about it with the booing and stuff. But at the end of the day, I’m here to try and win the race, which we’ve which we’ve done.

“Some people of course they can’t appreciate that, but that’s of course because they’re very passionate fan of a different team and is what it is.

“It’s not going to spoil my my day. I’m just enjoying the moment.”

It is, ultimately, a compliment, but the increasing frequency of such incidents leaves a sour taste in the mouth.

The rise of social media, coupled with the impact of Netflix’s Drive to Survive series has created pockets of toxic fans, whose only apparent motive is to bask in any potential hostility.

It has led to ugly scenes in Austria, Silverstone and other venues on the calendar, and is something F1 bosses must address before it is too late.

Sainz and Hamilton scythe through pack

Carlos Sainz and Lewis Hamilton lined up 18th and 19th respectively after their grid penalties were applied. And while the pair took different routes, both came through the pack with aplomb to finish fourth and fifth on the road, the best either could have done without the intervention of a safety car.

The Spaniard, in particular, turned in one of the best performances of his career, as he took every opportunity that presented itself with clinical precision, giving the impassioned home support plenty to cheer about down the main straight.

Lap after lap, he picked off those ahead into Turn 1 until he took over fourth from the roadblock that was Daniel Ricciardo. Had the race restarted after the late safety car, there’s every chance he would have nabbed third from Russell, but he can be more than happy with his day’s work as we head into a three-week break.

As for Hamilton, it was another reminder of his ability to perform when his back is against the wall. The W13 is undoubtedly the third best car on the grid, but it lacks the straight-line speed of the Red Bull and Ferrari, making the seven-time champion’s journey back into the top five more tricky.

He emerged from the pits after his one and only stop in 12th and at the back of a long DRS train, but made the most of his tyre advantage to make up six places in just three laps.

The pick of the moves came when he opportunistically usurped both Pierre Gasly and Lando Norris coming out of Turn 2, after a slow stop put the McLaren driver right in the firing line.

Should it have been red flagged? Should it have restarted with lapped cars still in place? Or was procedure followed to the letter and sometimes that’s just the way it goes?

While unsatisfactory, the right decisions were made at the conclusion of the Italian Grand Prix. It’s like when a blockbuster football match finishes 0-0. These things happen.

To manufacture an alternative where it isn’t merited is a dangerous direction to push the sport down, as Abu Dhabi last year proved beyond doubt. Events at Monza brought that dark day in the sport’s history back into the spotlight, and it was pleasing to see lessons have been learned.

On Lap 47 of 53, Ricciardo parked his stricken McLaren between the Lesmos but it wasn’t blocking any part of the track, nor had he made contact with the barrier, therefore it was a straightforward safety car scenario.

Nobody would have been complaining had the car not been stuck in gear, leaving the marshals helpless until the recovery vehicle arrived. By that point, three laps had passed, and the damage was done.

It was anticlimactic as Verstappen crossed the line at a canter and the fans voiced their understandable displeasure, but that’s the way sport goes sometimes. Rules are there to be followed, and that’s what the race directors did.

If, as Toto Wolff said in the aftermath, it is decided that under no circumstances should a race finish behind the safety car, then a regulation change is required; until then, let’s just chalk it up to a slice of bad luck.

As far as debuts go, it doesn’t get much better. That might sound like hyperbole given Nyck De Vries only finished ninth, but given the circumstances, nothing more could have been asked of the 27-year-old.

When Alex Albon was ruled out with appendicitis ahead of FP3, De Vries got the call to deputise, and he hit the ground running, outqualifying his experienced teammate Nicholas Latifi and lining up in eighth alongside Verstappen once grid penalties had been applied.

He admitted to being nervous ahead of the race, but you wouldn’t have known. In fact, he looked like he belonged from lights out to chequered flag as he showed maturity, pace and brilliant defensive instincts to hang on to ninth and take the team’s points tally for the season to six.

He admitted he’ll be proud of his “dream debut” no matter what, but with the ongoing struggles of Latifi, you’d have to think De Vries could be in line for a full-time seat on the grid next season.

After a whirlwind triple-header, the sport now heads into a three-week break. The Formula 1 2022 season reconvenes in Singapore from September 30 to October 2, where Verstappen will have a chance to wrap up a second successive world championship.