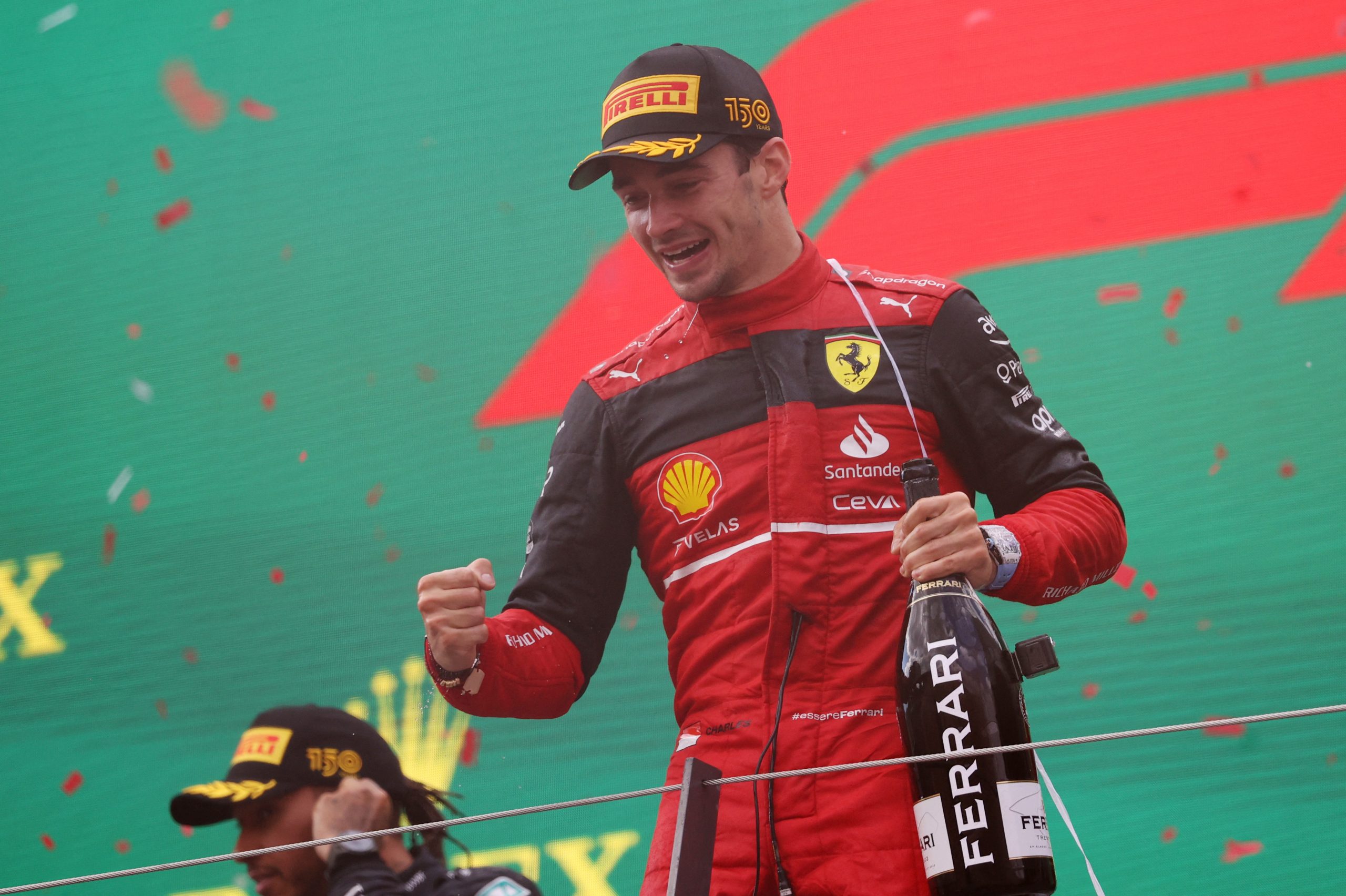 Finally Charles Leclerc ended his winless streak with a brilliant drive at the 2022 Austrian Grand Prix to trim his deficit to Max Verstappen in the F1 driver standings to 38 points.

A gutting retirement for Carlos Sainz prevented a likely Ferrari 1-2 and now puts the Spaniard 75 points behind Verstappen which is surely too much to overcome.

Leclerc has been the quicker driver of the Ferrari pair for most of this season and has done very little wrong, even when highly frustrated by some of the team’s strategic decisions.

Team principal Mattia Binotto would be making a mistake by not backing Leclerc to try and get on a winning streak to seriously pressurise Verstappen.

Leclerc won for the first time in F1 without starting from pole position with a near-perfect performance.

He almost used Saturday’s sprint race as a warm-up to get a feel of how the tyres behaved and whether the car had enough pace to challenge Verstappen.

Immediately after the chequered flag, Leclerc said: “We are quick, we will get them tomorrow” as he trailed his championship rival home in second.

It’s unusual for an F1 driver to say something like that with such confidence and Leclerc was proven right 24 hours later.

Early on in the Grand Prix it became clear Leclerc could easily follow Verstappen as he got within one second and made a few half-hearted lunges before beautifully going down the inside at Turn 4.

From there, his first win since the Australian GP in April was always going to be his as Ferrari were excellent on the medium and hard tyres and had the pace to win with either a one or two-stop strategy.

“I definitely needed it,” Leclerc told the press. “I mean, of course whenever I get to a new race since five races I have a smile on my face and I kept being optimistic, but obviously hard race after hard race, it just felt like everything was against me.

“So, finally we had a breakthrough good race today and it really feels good to have a win again.”

Leclerc needs the entire backing of Ferrari and any strategic decisions should be done to favour him.

He will need every point to mount a comeback against Verstappen, having been 49 points behind just two events ago.

It’s only the halfway mark of the season so there is time for Ferrari and Leclerc to turn things around if they work together properly.

It wasn’t the perfect day for Ferrari though because Sainz suffered an engine failure with 15 laps to go when he was set to overtake Verstappen.

Sainz didn’t quite have the pace of teammate Leclerc, but he had enough to make it a Ferrari 1-2 and was robbed of his seventh podium in 2022.

Red Bull‘s tyre wear was good in Spielberg, it was just a case of Ferrari finding the perfect setup and reading the conditions to make a car which was sensational, even with a throttle issue for Leclerc at the end of the race.

Ferrari won’t have this pace advantage in every race though and the real test will be when things are a little more even, like in some of the races earlier this season.

Binotto says he was just as nervous as Leclerc about the pedal issues and stopped watching the race with five laps to go.

“I was a bit disappointed in Silverstone, and today too, but I’m happy for Charles and for us,” Binotto told Sky Sports.

“We can fight for wins and will keep on fighting. We just need to work on reliability.

“It was important for Charles to win. It has been a relief for him to win. He needed it and he deserves it. We are all happy.”

There was a glimmer of hope for Mercedes when Lewis Hamilton was fighting for pole position, until a rare mistake saw him crash out in Q3.

George Russell also lost the rear of his car just minutes later, sending him into the barriers. When was the last time two cars from the same team crashed in the same segment of qualifying?

All the promise for Friday turned into little in the sprint race and Grand Prix as Hamilton and Russell were a some way off the pace of Ferrari and Red Bull.

Straight line speed was one of Mercedes‘ biggest issues, perhaps due to the altitude of the Red Bull Ring which the power unit didn’t enjoy.

Paul Ricard and the Hungaroring should suit them better though and Hamilton was there to pick up the pieces once again when the front-runners faltered.

“I would argue that we’ve not yet been in a position where we’ve been the fastest car,” Hamilton told the press. “These guys [Ferrari and Red Bull] still have had the edge.

“I think we’ve sometimes been able to match their times. But, to the point where we’re actually ahead of them, we’re not quite there yet.

“We’ve made some improvements this weekend to the car once again, but for some reason at this track it just wasn’t the same, as they were a little bit further ahead, particularly in race pace.

“I’m hoping that when we go to these next tracks it’s a little bit more favourable to us, a bit more like Silverstone. If that’s the case I would really love to be in the battle that they’re having at the front.”

Fernando Alonso was simply let down by Alpine at the Austrian GP after having to start last due to an electrical problem in the sprint race.

He was making his way through the field as well as he could and was on course to at least finish in the top seven when the late-race safety car was called.

However, it all went wrong when Alonso had to pit once, then pit again on the next lap due to “vibrations”.

Allegedly, Alonso‘s tyre wasn’t fitted properly so he had to come in again which dropped him outside of the top 10. The stewards investigated this and Alpine have been cleared of any wrongdoing.

“One point is better than nothing considering we started on the back row today,” said Alonso.

“I think it was one of my best races this season, other than probably at Silverstone last weekend. I think we were fighting for sixth or seventh positions, but then there were some strange vibrations on the tyres we fitted after our second stop under the virtual safety car.”

Alonso had great pace too, matching the Mercedes‘ pace when running in clean air which makes his 10th place very frustrating.

Esteban Ocon was able to make the most of Alpine‘s pace with fifth, his best result of the season and heads into his home event, the French GP, in good spirits.

Having scored his first points in F1 at Silverstone, Mick Schumacher finished sixth at the Austrian GP with a superb weekend.

He was right on the pace of teammate Kevin Magnussen in qualifying and the sprint race, before raising his game on Sunday to prove he was faster than the Dane.

Schumacher‘s shown great pace at the last three events and seems to be gaining plenty of confidence, reminiscent of his title-winning Formula 2 campaign.

Credit must go to Haas too as they have had the fewest upgrades over the last month yet clearly have a baseline car which is capable of scoring points.

“A fantastic result for the team today with a double-points finish and back in P7 in the championship,” said team principal Guenther Steiner.

“There was one little issue with Kevin’s engine, but everything went as perfect as it can be. Thanks to the whole team for a big effort.”

Track limits was a big talking point in all of the series running at the Red Bull Ring with penalties given out left, right and centre in the F2 and F3 races.

Some drivers received penalties in the F1 race too, with many drivers complaining they were not abusing track limits. Replays showed they were.

You might think it’s silly to give out endless warnings and penalties, but it’s good to see the stewards being strict and enforcing the regulations – if you run wide, you are warned or punished. That’s how it should be.

It’ll be interesting to see if this strict policy continues because track limits and forcing drivers off the track is always a major talking point in Spielberg due to the nature of the track.

Hopefully consistency will finally prevail when the second half of the F1 2022 season begins at the French GP on July 22-24 at Paul Ricard.