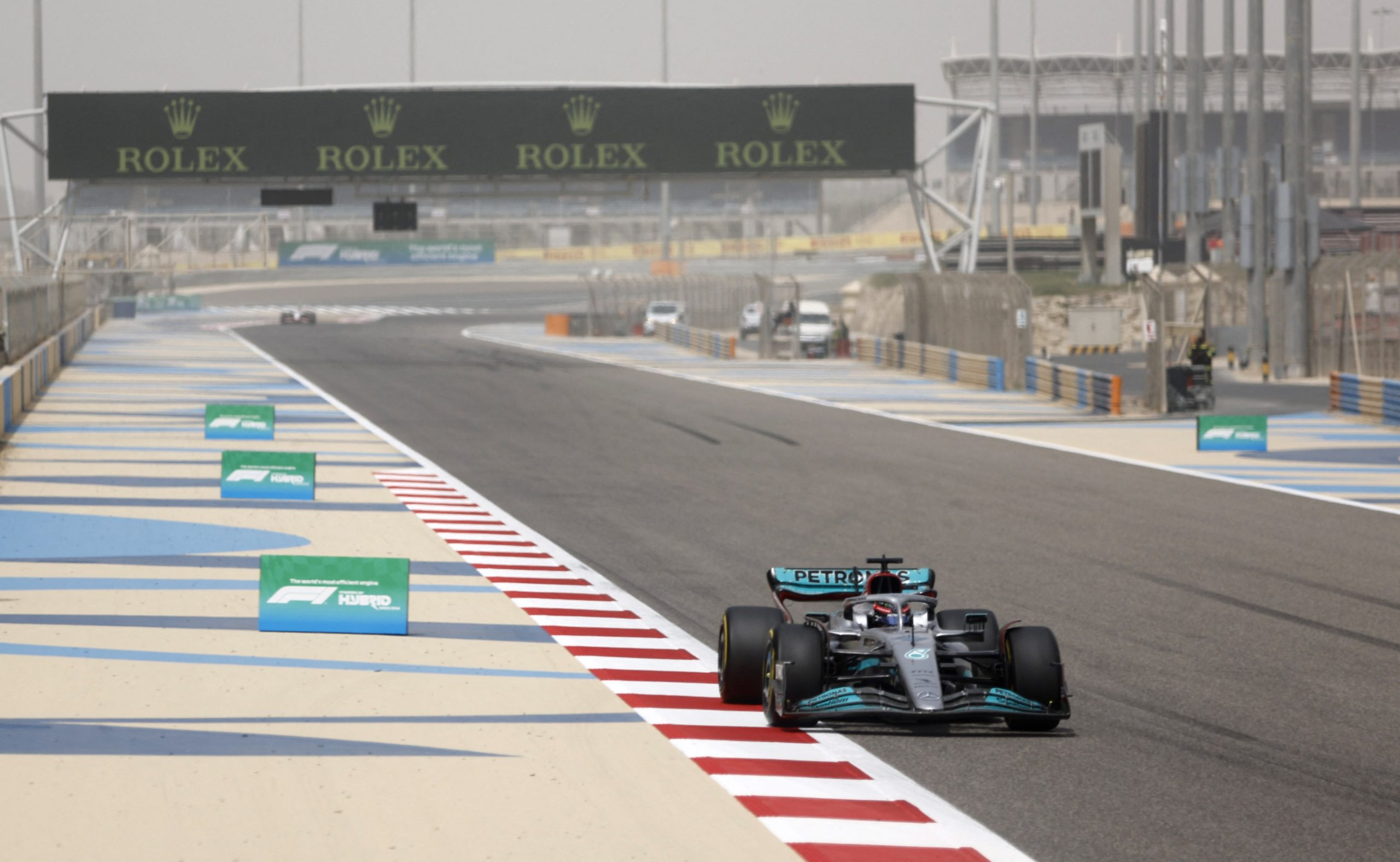 Formula 1 pre-season testing set things up beautifully for the season-opener with Red Bull, Ferrari and Mercedes all appearing to be in contention for the win at the Bahrain Grand Prix.

The sport’s new regulations haven’t quite turned the pecking order on its head, but the field could be closer than its been for a long time in F1.

There are many unknowns for the teams and it’s likely to come down to which outfit makes the least mistakes and have a car that’s relatively easy to get up to speed.

The anticipation is at boiling point, and there are plenty of storylines to look out for this weekend.

The two strongest teams from testing were Red Bull and Ferrari, the latter impressed from day one and are quietly confident about their chances in 2022.

“Testing has been really smooth for us, we did six days without any real issues and managed to learn a lot from the car,” Carlos Sainz told the press.

“I think it puts us in a good place this weekend. If there’s any opportunities to go for it, I will go for it.”

Sainz is yet to face the pressure of fighting at the front of the pack, so he will have to demonstrate he has the ability to raise his game to be in contention for pole position and the win.

Meanwhile, Charles Leclerc proved he has what it takes to go head to head with the best drivers on the grid and he has an excellent track record at the Bahrain International Circuit.

He took pole position on his F2 debut in Sakhir and claimed a superb victory in the sprint race by making a pit stop.

Leclerc also took his first pole position in F1 at the 2019 Bahrain GP, to become Ferrari‘s youngest ever pole-sitter. The Monegasque driver was on course for victory until he lost a cylinder in his engine, so had to settle for third.

Despite Ferrari‘s impressive pre-season test, Leclerc has played down the team’s chances.

“I don’t want to say it was our best [pre-season test],” said Leclerc. “People will straight away come to the conclusion, that we’re ahead of everyone, which I don’t think that is the case. I think we’ve a bit behind Red Bull.”

If Leclerc or Sainz are to win this weekend, they will have to beat Max Verstappen who is the favourite to start off his title defence with a win.

Red Bull‘s upgrades on the final day of testing worked wonders and the team were visibly delighted with Perez and Verstappen‘s pace.

We’ve had a taste of Verstappen and Leclerc in 2019 and it was hair-raising stuff as they left each other no space at the Red Bull Ring and Silverstone, with risky and bold moves in a bid to come out on top.

The Bahrain International Circuit is perfect for modern F1 racing due to the two long straights down to Turn 1 and Turn 4, so expect Verstappen and Leclerc to provide some fireworks if they are fighting for the same part of the track on Sunday.

Will Mercedes be in the fight in Bahrain?

Mercedes seem to be on the backfoot following a tricky pre-season test, where the Silver Arrows looked like a handful for Lewis Hamilton and George Russell.

Porpoising was a big problem for everyone, but Mercedes were still struggling with the the violent bouncing motion on the last day of the test.

The long run pace wasn’t that encouraging either, even if both drivers had the engine turned down, so Mercedes could find themselves battling to simply be on the podium.

Russell admits Mercedes are not where they want to be, heading into the season-opener.

“Our goal is to try and make the car faster,” Russell. “It’s visible on the television that we’re bouncing around a lot.

“The team have been working a lot day and night since the test to improve that and to improve our performance.

“I believe there is potential in the car, it’s just when that comes. Fortunately the races don’t come quite so thick and fast early in the season.”

You cannot rule out a team that have won the last eight constructors’ championships though and it’s simply a question of when they will get on top of their issues.

It could come as early as this weekend, or as late at the second half of the season but you would be foolish to believe they have no chance of beating Ferrari and Red Bull in Bahrain.

Hamilton won last year’s Bahrain GP in style, with a magnificent drive to beat Verstappen. If he’s had a small weakness in previous years, it has been the start of the season when he is not quite at his best.

This is where Russell can pounce and make an impact at Mercedes. Russell‘s one lap pace was outstanding at Williams, so he could really ruffle Hamilton in qualifying immediately to give him track position for the Grand Prix.

Mercedes‘ mantra has always been to favour the leading driver on Sundays, so Russell would be given priority in strategy whereas Hamilton may have to play second fiddle.

The Mercedes inter-team rivalry has the potential to be as feisty as Hamilton and Nico Rosberg, and as much as the team play it down, they know an F1 driver’s ego has the final say.

What about the F1 midfield?

Whether there will be a midfield has to be the first question here, because it’s not entirely clear who will be at the back.

Williams are expected to bring up the rear with Alex Albon and Nicholas Latifi, but even the Grove-based outfit showed glimpses in testing that they have moved up the grid compared to 2021.

Alfa Romeo and Haas‘ strong pace could be genuine, so the battle to simply not be last could be huge.

The margins between being eliminated in the first part of qualifying and being in a position to score some handy points are set to be incredibly tight so this is where the driver can make the difference.

Whoever is willing to really push to the limit and can adapt to the cooler conditions when the floodlights are turned on, will come out on top.

It’s possible that one driver from Alpine, Aston Martin, AlphaTauri and McLaren are in the points, whilst their teammate is outside of the top 10.

Nico Hulkenberg returns… for one race only

F1’s favourite super-substitute driver Nico Hulkenberg is back, after Sebastian Vettel was infected with COVID-19 on Thursday.

Hulkenberg previously filled in for Sergio Perez and Lance Stroll when they contracted coronavirus during the 2020 season.

“I was in bed and got the call to drive,” said Hulkenberg. “I’m going to take it lap after lap, session after session, to get used to it again and brush the rust off.

“I’ve been in this situation before so I know what to expect. But, the time away and these new cars are a white piece of paper to me.

“It’s not an easy situation, but I’ll try to learn as fast as possible.”

It’s a big ask for Hulkenberg to be competitive this weekend because he hasn’t had tested the 2022 F1 car and has done zero racing over the last 12 months.

That said, his ability to jump into the Racing Point of Perez at the 2020 British GP and qualify 13th without any practice was extraordinary.

A week later at the 70th Anniversary GP, he qualified in third, only behind the Mercedes pair of Hamilton and Valtteri Bottas.

Whilst the teams have done thousands of testing kilometres, nobody has pushed their new 2022 machines to the absolute limit and we are yet to see how they are in racing conditions.

The consensus is overtaking will be significantly easier this season, which bodes well for the show and it means the drivers will have a bigger affect on the performance and result, as it should be.

Pirelli‘s bigger 18-inch tyres will be a huge factor because the way to extract the most performance from the new rubber is also known.

Tyre degradation and which teams have the best tyre wear is also up in the air and it will be difficult to perfectly fine tune and setup the cars to get the right balance between qualifying speed and race pace.

Which ever team can get closest to this fine balance is likely to have a strong first weekend, that has the makings of a classic season-opener.