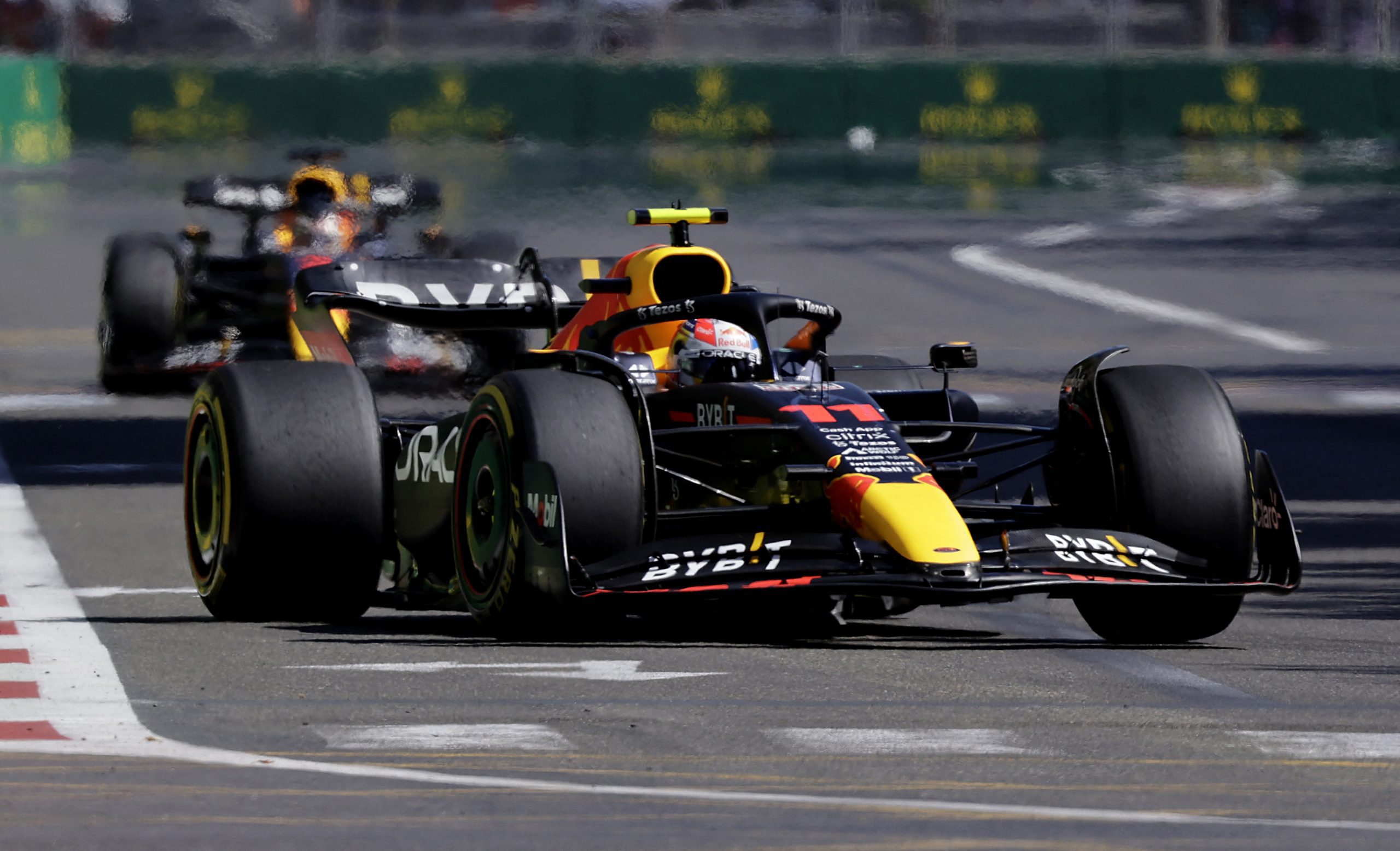 Max Verstappen avenged his nightmare 2021 race in Baku with a victory at the 2022 Azerbaijan GP as both Ferrari cars retired with mechanical issues.

Verstappen led for much of the race once he managed to overtake teammate Sergio Perez on Lap 15, after the Mexican led the earlier portions of the Grand Prix.

Perez started second on the grid behind the Ferrari of Charles Leclerc, but got the quicker start off the line and was able to slice up the inside and take an early lead, which he swiftly built into a more than two second advantage.

Verstappen was left to chase down the Ferrari as Perez began to pull away at the front, but the complexion of the race completely changed after Carlos Sainz was forced to retire due to a hydraulic issue on Lap 9.

That incident brought out the Virtual Safety Car, with the Red Bulls opting to stay out while Leclerc came in for a set of hard tyres along with the Mercedes cars and a number of other drivers.

Verstappen subsequently showed superior pace and passed Perez on Lap 15, with the Red Bull pitwall ordering him not to fight.

From there, the Dutchman controlled the race and came over the line 20 seconds ahead of his teammate to take his fifth victory of the 2022 season.

While Red Bull demonstrated largely superior pace over the course of the race, it was the drama at Ferrari which may have the biggest long term consequences for the 2022 championship.

Leclerc was chasing down Perez in second with Sainz already out of the running when disaster struck for the Scuderia once more, as the Monegasque’s car began to smoke out of the exhaust on the long pit straight.

The issue forced Leclerc into an agonisingly disappointing retirement, allowing the Red Bulls the space to run away with the race at the front and to secure another 1-2 finish and pull out their lead at the top of the Driver and Constructor Standings.

For Ferrari, it marks yet another DNF result from the lead following Leclerc’s retirement in Barcelona two races ago.

And there may be worse to come, as two other Ferrari-powered cars – the Alfa Romeo of Zhou Guanyu and the Haas of Kevin Magnussen –  also both retired with technical issues in Baku.

There will be plenty of soul searching back at Maranello in the coming week in the run up to the Canadian GP, with the reliability problems coming on the back of a disappointing outing in Monaco last time out.

Given that it was the Red Bull cars that were drawing concerns about reliability at the beginning of the season, it appears the tables have turned and the pressure is now on Ferrari to address the problem if they are to fight back in the championship battle.

Mercedes pick up the pieces

While the race was the worst-case scenario for Ferrari, Mercedes were the big beneficiaries as George Russell continued his streak of top 5 finishes with another podium in 3rd place in Baku.

Russell was consistent throughout the race, unable to close down the gap to the two Red Bulls in front while keeping the chasing pack at bay.

Lewis Hamilton was more frustrated by traffic throughout his run, and lost time as he got stuck in a double-stack pitstop behind his teammate during the Sainz VSC, but managed to cut his way through the pack to come over the line in fourth.

Pierre Gasly qualified well for AlphaTauri, showing the pace of the car in Azerbaijan, and converted that performance into a fifth place finish, his best result of 2022 so far, while Sebastian Vettel secured a good result for Aston Martin in sixth.

The Alpine was the quickest of all the cars down the 2km pit straight, hitting top speeds of up to 347 km/h, and despite being unable to keep Hamilton and others behind the team secured a double points finish with Fernando Alonso in seventh and Esteban Ocon in tenth.

It was a better race for McLaren’s Daniel Ricciardo as he finished in the points and ahead of his teammate in eighth, with Lando Norris just behind in ninth as both drivers worked together to secure a solid result for the team.

Valtteri Bottas was unable to maintain his streak of points scoring finishes for Alfa Romeo in 11th, ahead of the Williams of Alex Albon in 12th.

Yuki Tsunoda was on course to finish in the points and ahead of teammate Gasly before an issue with his rear wing, addressed with a dose of duct tape, forced a late pitstop which took him down to 13th.

Mick Schumacher qualified for the first time at the back of the grid yesterday, but made up one place in the race to put his Haas in 14th, ahead of the Williams of Nicholas Latifi in 15th following a 10 second stop-go for the Canadian driver due to a grid infraction ahead of the race.