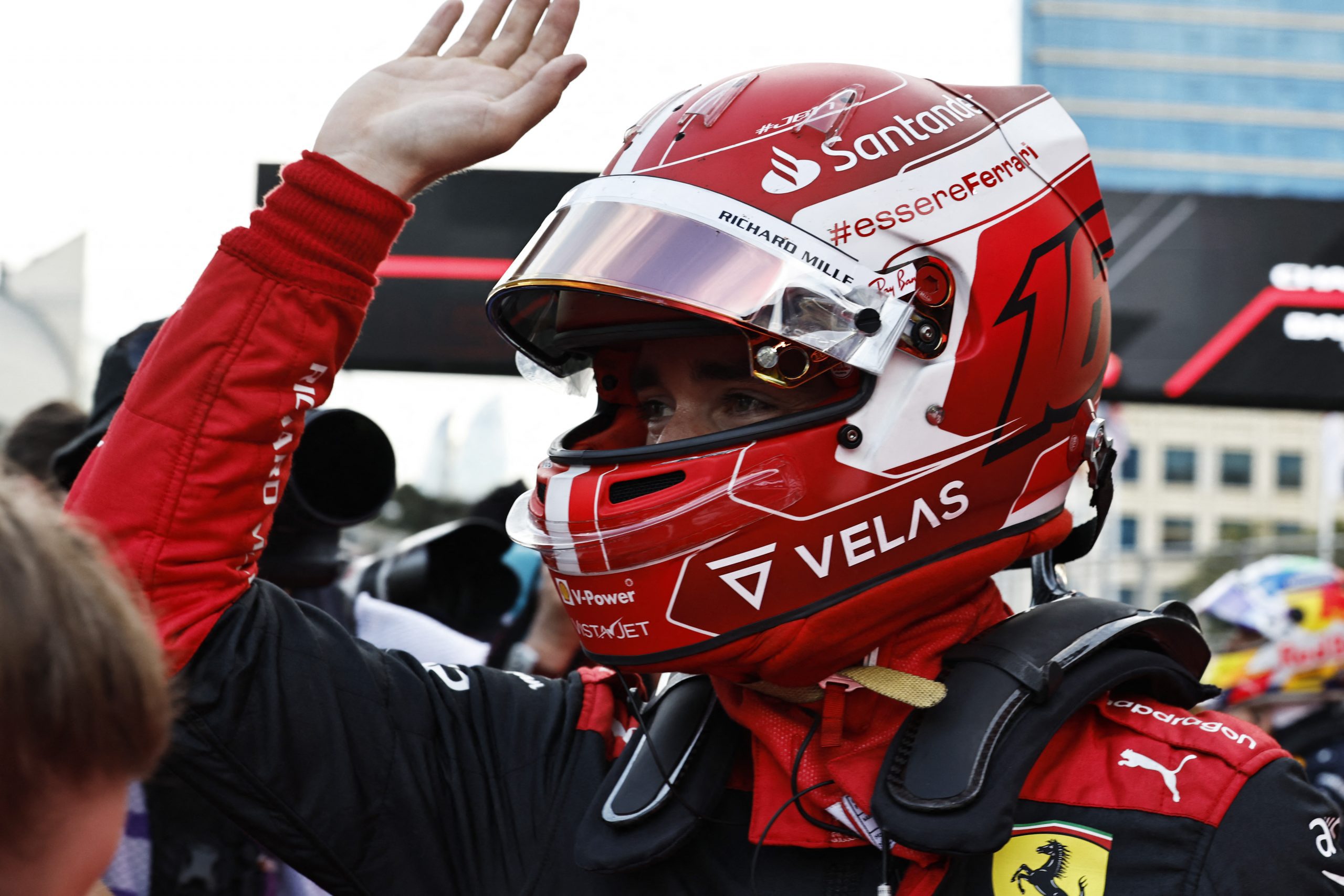 Charles Leclerc outpaced both Red Bulls to take pole position for the Azerbaijan GP after pulling out a stunning final lap right at the end of the session.

Leclerc hadn’t topped the timing charts throughout qualifying, as first Sergio Perez and then his teammate Carlos Sainz went fastest, but the Monegasque once again showed his Saturday talent to become the first person to take pole in Baku more than once.

Perez joined the Ferrari on the front row after he once again out-qualified his teammate Max Verstappen by a few hundredths, the Mexican maintaining his momentum from his Monaco win after looking consistently quick throughout qualifying and the practice sessions.

It could have been even better for Perez, had he not lost the benefit of the tow after coming out late for his final lap as the team had to refuel the car.

Despite initially setting the fastest time in Q3 with his first flying lap, Sainz was unable to replicate the feat on the final lap of the session after clipping the wall at Turn 2, and will start the race from 4th.

George Russell was the best of the Mercedes, once again out-qualifying his teammate Lewis Hamilton to take 5th, ahead of the AlphaTauri of Pierre Gasly in 6th.

Hamilton had struggled throughout the session, and was complaining about excessive bottoming on the car as Mercedes continued to grapple with porpoising on the long straight in Baku.

The Brit also faces an investigation from the stewards for driving too slowly during Q2 as he waited for Russell to overtake and give him a tow as he sat precariously on the edge of elimination, compounding another disappointing session for the seven-time champion.

Yuki Tsunoda put in a strong performance to put his AlphaTauri on 8th, ahead of Sebastian Vettel in 9th for Aston Martin and the Alpine of Fernando Alonso rounding out the top 10.

Despite showing some promise during the practice sessions, both McLarens failed to make it through to Q3, with Lando Norris and Daniel Ricciardo qualifying in 11th and 12th respectively.

The Alfa Romeo pair of Valtteri Bottas and Zhou Guanyu also both went out in Q2, alongside the Alpine of Esteban Ocon.

The first session was relatively drama free until the final 3 minutes of the session, when Lance Stroll went into the wall at Turn 7 after a lockup.

The Aston Martin looked relatively unscathed from the incident apart from flat spotted tyres, but as Stroll made his way around the track he didn’t come into the pits and instead continued on another lap.

However, the earlier crash reared its head again as the car failed to make Turn 2, with Stroll going straight into the wall and damaging his wheel, bringing out the red flags.

That prompted a flurry to get back out on time once the debris was cleared, with only around 2:30 left on the clock.

Drivers began to even overtake each other to ensure they made the chequered flag with enough time for a final lap, with Bottas the major beneficiary for Alfa Romeo as he was just able to continue his 143 race streak of making it through to Q2.

Kevin Magnussen was the main loser from the Finn’s performance, the Haas slipping down into 16th and out, along with the Williams pair of Alex Albon and Nicholas Latifi and his teammate Mick Schumacher.