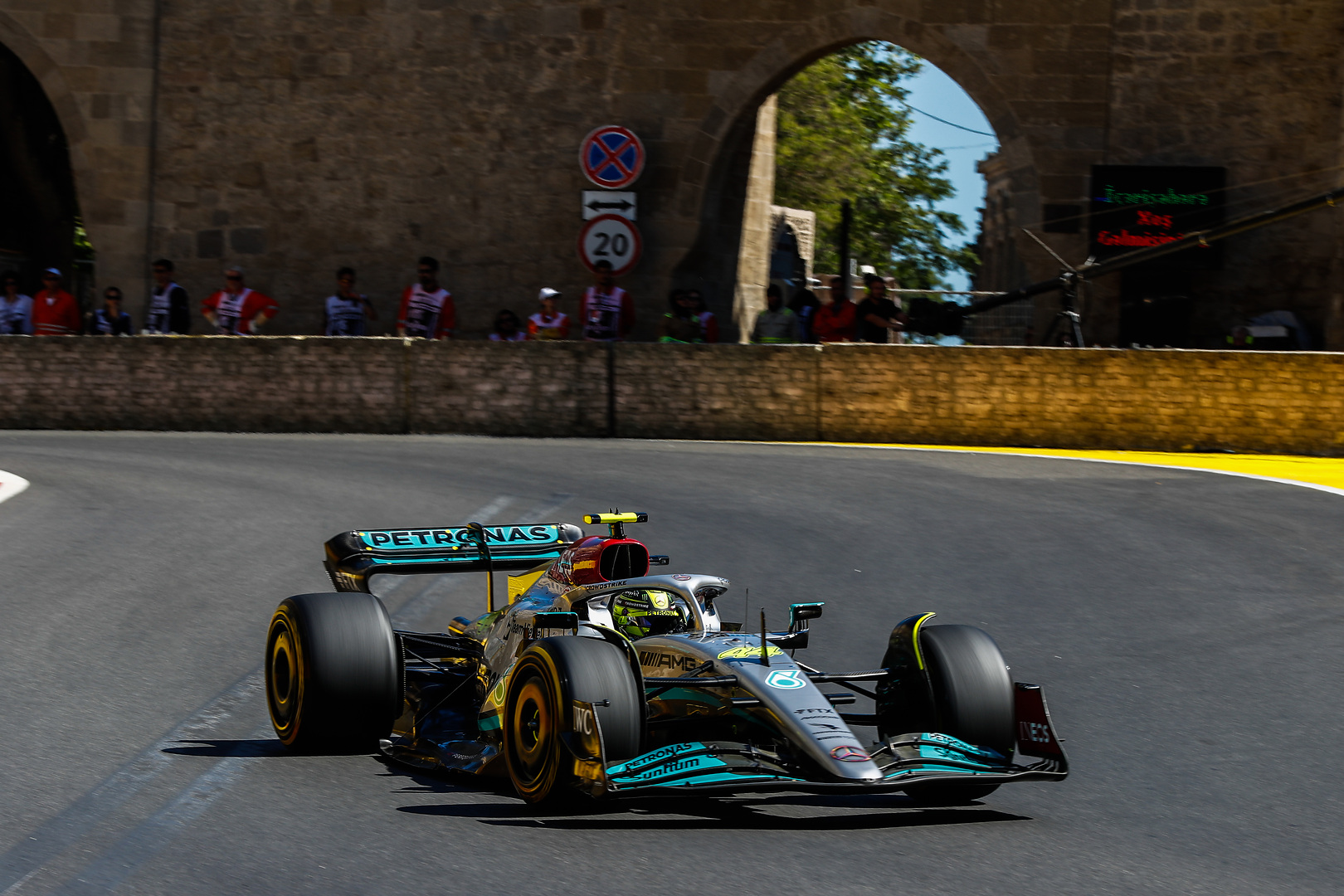 It wouldn’t be a proper Formula 1 season without an on-track problem which polarises the paddock, this year it’s porpoising which has divided the 10 teams with Mercedes and Red Bull on opposite sides once again.

Porpoising became a talking point at the opening pre-season test when some cars were seen bouncing down Barcelona’s main straight and it hasn’t gone away.

The Azerbaijan Grand Prix weekend was by far the worst the porpoising has been so far this year, leaving Lewis Hamilton scrambling out of his Mercedes after the race.

Hamilton isn’t the only driver who wants changes to be made in order to protect the drivers’ healthy and safety, as Pierre Gasly, who finished fifth in Baku, explains.

“It’s not healthy, that’s for sure,” Gasly told Motorsport.com. “I’ve had a physio session before and after every session, just because my [spinal] discs are suffering from it. You have literally no suspension. It just hits going through your spine.

“The team is asking me, ‘OK, we can compromise the set-up?’ and I’m compromising my health for the performance and I’ll always do it, because I’m a driver and I always go for the fastest car I can.

“But I don’t think FIA should put us in a corner where you got to deal between health and performance.

“That’s the tricky part of it, and clearly not sustainable. So that’s what we discussed at the drivers’ briefing and kind of alerted them on this problem, and try to ask them to find solutions to save us from ending up with a cane at 30 years old.”

Read Gasly‘s words carefully – “compromising health for performance”. This is a dangerous scenario for F1.

The FIA need to intervene if the teams have reached a stage where being competitive matters so much, that the drivers health is at risk. There can be no argument about that.

Whether Baku was a one-off, or if the harsh levels of porpoising remain is difficult to say. If the Baku bouncing levels continue, the drivers will genuinely struggle to compete every weekend without getting hurt.

Perhaps, the cumulative effect of eight events is only starting to kick in, which is why we are hearing more and more drivers raising concerns about porpoising.

“We want change but who knows what that change is,” George Russell, who is director of the Grand Prix Drivers’ Association, told the press.

“It’s just us, 20 drivers, we would choose to have a safer ride out there and when you’re going 300km/h between the walls and you barely can keep the car in a straight line.

“I couldn’t even see my pit board, the car was moving around so much. We have the technology in Formula 1 to resolve this with a click of our fingers, I believe, so as I said, nobody’s looking to take advantage from this, we’re just looking for a safer, easier solution.”

Toto Wolff apologised to Hamilton after the Azerbaijan GP for having to drive a s***box for 51 laps, and is eager for a change.

However, Wolff‘s canniness and ability to play political games in F1 shouldn’t be underestimated, something Red Bull team principal Christian Horner is fully aware of.

“I would tell [the drivers] to bitch as much as they could over the radio and make as big an issue as they could,” Horner told RaceFans. “It’s part of the game.

“You can see it’s uncomfortable but there are remedies to that. But it is to the detriment of car performance so the easiest thing to do is complain from a safety point of view.

“But each team has a choice. If it were a genuine safety concern across the grid, it should be looked at, but if it’s only affecting isolated teams then that’s something that team should potentially deal with.”

Horner does have a point. Why should Red Bull and other teams such as Alpine, that are not bouncing significantly, be disadvantaged?

They have worked hard over the winter to make cars that don’t porpoise too much, knowing that the return of ground effect was likely going to cause the bouncing effect to return to F1, having been a problem in the 1970s.

Ferrari team principal Mattia Binotto thinks there are solutions to porpoising, but didn’t specify when there will be a resolution.

“If we judge Formula 1, I don’t think they are the least comfortable cars to drive, in terms of [wider] motorsport,” Binotto told the press.

“I think that it’s a challenge for the drivers, no doubt. But still, I think those cars are quite comfortable to drive. It’s a challenge, a technical challenge.

“We look at ourselves, we made already some progress, I think in the future, we can do more progress. So, certainly too early to judge.

“I’m pretty sure we will find a solution, medium-long term and it’s a challenge. It’s we need to accept it. It’s certainly something on which we need all to better understand to improve, but happy to do that.”

The teams can stop the porpoising

We see teams compromising reliability versus performance all the time, especially when the weather is hot and they need to add cooling packages to the car.

Surely, they can find the right compromise when it comes to their driver and the performance of the car.

Interestingly, Aston Martin performance director Tom McCullough has revealed they think the porpoising can be stopped, if the teams really tried.

“I think what is clear is that a lot of our development tools, and I don’t think we’re unique in this, didn’t really show that this was going to be as much of a problem as it was,” said McCullough.

“Now it’s a matter of developing your tools to better replicate that to be able to do a better job.

“We’ve got a set of regulations, we’re trying to make the car as fast as possible within those regulations and we think most teams can totally stop the bouncing, porpoising, but everyone wants to go fast as well. That’s just a compromises we’re playing.”

What is the solution?

It’s understood that the FIA have offered various suspension and ride height solutions to the teams, but an agreement is yet to be made ahead of this weekend’s Canadian GP, where more talks between F1‘s bosses are expected about porpoising.

A basic solution would be to have a rule which states if a car exceeds a certain level of bouncing, which F1 have the technology to measure, a team should be forced to raise the ride height.

Therefore, the teams that have cars which aren’t bouncing substantially are not disadvantaged, and those who are, will likely have to set their machines up in a way to ensure they don’t go above the limit, thus protecting the drivers.

One thing for certain is, porpoising, and talk of bouncing, won’t be hopping away anytime soon in F1.