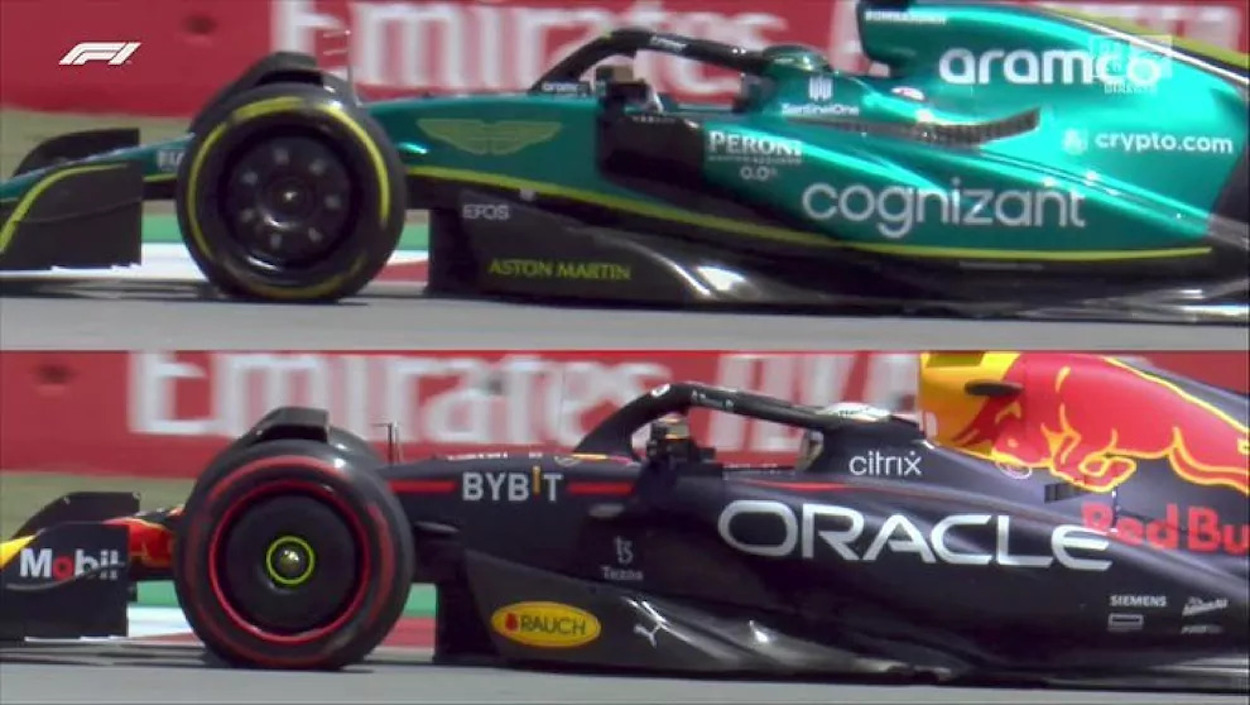 Ahead of the weekend’s Spanish Grand Prix, all eyes turned to Aston Martin after the team made a significant change to their car, which now bears a remarkable resemblance to Red Bull‘s design.

The AMR22B is almost completely different from the car Aston Martin started the 2022 Formula 1 season, particularly in terms of the sidepods and the floor which look very similar to Red Bull’s RB18.

Although the FIA did approve Aston Martin’s upgrade, Red Bull were suspicious of the new design.

“While imitation is the greatest form of flattery, any replication of design would obviously need to comply with the FIA’s rules around ‘Reverse Engineering’,” said a statement from Red Bull.

“However, should any transfer of IP have taken place that would clearly be a breach of regulations and would be a serious concern.”

With heavily undercut sidepods and a stepped, ramp appearance on the upper bodywork, the modified Aston Martin is being dubbed as the ‘green Red Bull’.

“It is quite a thing to instruct your team to come up with a very close-looking clone of our car and of course a few people have moved over the winter period, and what you can’t control is what they take in their heads.

“But what would be of grave concern to us would be if any IP had in any way changed hands.

“That is where we rely on the FIA to do their job, they research, they have all the access and we will be relying on them heavily to ensure that no Red Bull IP has found its way into that car.”

Aston Martin have acquired a number of high-profile employees from throughout the paddock as part of its recruitment push since rebranding, including Red Bull’s former head of aerodynamics Dan Fallows.

A contract disagreement between the two teams was resolved in January when it was agreed that Fallows would start as Aston Martin’s technical director in April.

Red Bull advisor Helmut Marko was out for clarification as to how Aston Martin could deliver a car which looks to similar to that of Red Bull.

“But you also have to take into account that seven people were poached from us and that our chief aerodynamicist was pulled to Aston Martin with a disproportionately high fee.

“There are still some facts that we are checking. We will look into it in detail.”

Marko also added that there may have been some copying from former Red Bull employees, though not of documents, which is illegal in F1.

“What he has in his head. Copying is not prohibited in the approach. But can you copy without documents and then make such a detailed copy of our car?”

An Aston Martin spokesperson responded following the FIA’s comments: “Having analysed the data and the processes used to create the update, the FIA has now confirmed in writing that our update was generated as a result of legitimate independent work in accordance with the technical regulations.”

“The FIA carried out a routine pre-event legality check of the planned aerodynamic upgrade of the Aston Martin team for the 2022 FIA Formula 1 Spanish Grand Prix,” said the FIA.

“During this process, it became apparent that a number of features on the Aston Martin resembled those of another Competitor. The FIA therefore launched an investigation to check compliance with Article 17.3 of the Technical Regulations, and in particular the topic of ‘Reverse Engineering’ and potential illicit IP transfer.

“Both teams collaborated fully with the FIA in this investigation and provided all the relevant information. The investigation, which involved CAD checks and a detailed analysis of the development process adopted by Aston Martin, confirmed that no wrongdoing had been committed, and therefore the FIA considers that the Aston Martin aerodynamic upgrades are compliant.

“Article 17.3 specifically defines and prohibits ‘Reverse Engineering’, i.e. the digital process of converting photographs (or other data) to CAD models, and prohibits IP transfer between teams, but equally, this Article permits car designs getting influenced by those of competitors, as has always been the case in Formula 1.

“In the analysis we carried out we confirmed that the processes followed by Aston Martin were consistent with this Article’s requirements.”

With the controversy raging throughout the morning and into Friday’s practice sessions, Lance Stroll confirmed that Aston Martin had in fact been working on two concepts to their car design.

“Over the winter we had two philosophies that we developed,” Stroll said.

“We tried the first car in the first part of the season and we haven’t been as competitive as we wanted to be so there was this other philosophy of car that we had on paper.

“And it was a big flat-out push for the whole team to get it here this weekend, design, manufacture it and, you know, get the car to Barcelona.

“So a big thank you to everyone. It was really tough, and you know we are pretty short on spares and all of those things. It was flat-out to get it here this weekend but hopefully it goes a bit better.”