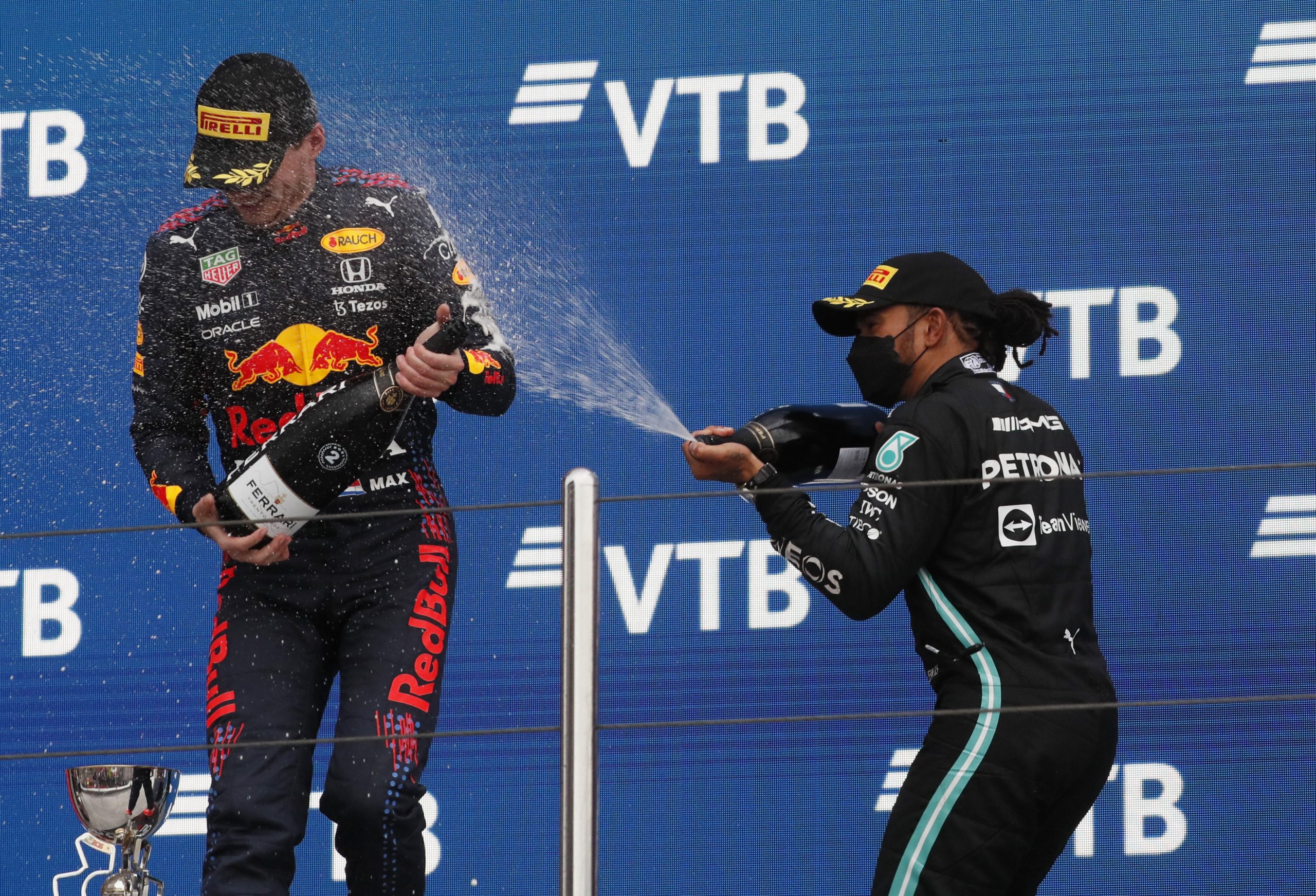 It isn’t often that you have two Formula 1 championship rivals smiling on the same podium, but that was certainly the case at Sunday’s Russian Grand Prix.

Lewis Hamilton took his 100th career F1 victory, a result that seemed unlikely with just a handful of laps remaining. Lando Norris, who led most of the race after starting from pole position, looked like he had things under control.

However, with a maiden F1 win within touching distance, the heavens opened. What started out as a slight drizzle quickly turned into treacherous conditions for those who stayed out on slicks.

Unfortunately for Norris, he was one of those drivers, and the conditions made the McLaren driver helpless in his efforts to keep Hamilton at bay. The Mercedes star, who initially turned down his team’s request to pit for intermediate tyres, eventually did and benefitted from the decision, retaking the lead in the Drivers’ Championship in the process.

The result is one Hamilton would have expected heading into the weekend, though how he got there likely wasn’t what he envisioned. After starting his weekend strongly on Friday, Hamilton made a costly mistake in qualifying on Saturday.

The Briton hit the pit wall when coming in for tyres near the end of the session, a mistake you wouldn’t “expect from a champion” he later noted, and one that forced him to start from fourth on the grid.

It was all the more frustrating given Max Verstappen was guaranteed to start from the back of the grid after Red Bull fitted his car with a new engine – his fourth of the season.

Add in that Russia is a Mercedes stronghold, the Silver Arrows having won every event at the Sochi Autodrom, and it’s easy to see why Hamilton was feeling the pressure.

He likely felt that same pressure for much of Sunday’s race. A poor start coupled with his inability to pass McLaren’s Daniel Ricciardo meant Hamilton wasn’t in the top three until after the first round of pit stops.

While we’ll never know for certain, it’s likely he wouldn’t have won the race without the rain. Although Hamilton managed to close the gap to Norris to just over a second, his inability to pass Ricciardo earlier on meant passing the leading McLaren was improbable.

However the rain opened the door to an unexpected win, though it’s unclear whether the final results actually benefit Hamilton in the end given Verstappen timed his pit stop perfectly to snatch second.

The Dutchman’s race started strongly, picking his way through the field with ease. By Lap 17 he found himself just eight seconds back from Hamilton. The change to mediums didn’t help him however, as Red Bull were forced to pit him earlier than they planned due to tyre wear.

As a result his progress stopped there, with Fernando Alonso even passing him for seventh. With little to lose from there, Verstappen was one of the first to pit for intermediate tyres, and the decision paid off with huge dividends.

With many ahead of him slow to respond, Norris being one of them, the Red Bull driver managed to snatch an unlikely second-place finish.

While the record books will show Verstappen finished 53 seconds behind Hamilton, it surely isn’t a big deal to the Dutchman and Red Bull.

Christian Horner said after the race that Red Bull’s goal was to limit the damage this weekend in Russia, and that finishing second felt like a victory to them. It’s hard to argue against that, especially when you consider Verstappen leaves Sochi just two points behind Hamilton. With just a handful of laps remaining, all signs pointed to that gap being much larger.

Instead, with F1 now heading for Turkey, the USA and Mexico – all tracks that favour Red Bull – the pendulum has certainly swung in Verstappen’s favour.

Given Valtteri Bottas was a non-factor for all of Sunday’s race despite his fifth-place finish, the onus is now on Hamilton to pull whatever tricks he has remaining out of his bag if he wants to win a record-breaking eighth World Championship.

It remains to be seen whether Sergio Perez will be much of a factor either, the Mexican finishing down in ninth after flirting with a podium finish at one point.

However what is certain is that we are in for a nail-biting finish to what has been the closest F1 battle in years, and that Norris likely won’t be kept off the top step of the podium for much longer.